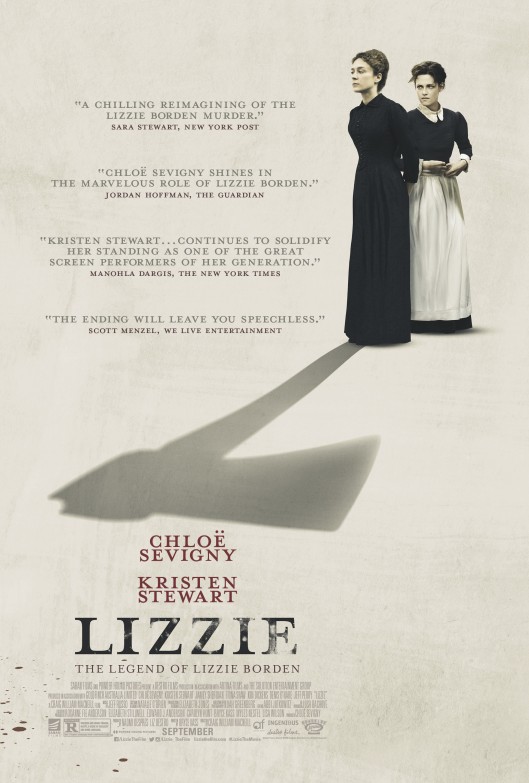 Fall River, Massachusetts, 1892. Lizzie Borden (Sevigny) is the youngest daughter of respected local businessman Andrew Borden (Sheridan). Unmarried at thirty-two, Lizzie is constantly at odds with her father over the way in which she conducts herself. She finds a supporter of sorts when her father engages a new servant, Bridget Sullivan (Stewart). Known as Maggie, Bridget and Lizzie develop a close bond just when Andrew begins receiving anonymous threats to his life. Consulting with his brother-in-law, John Morse (O’Hare), he alludes to a will that would see Morse inherit his estate if his wife, Abby (Shaw), were to pre-decease him. Lizzie overhears this conversation and decides to take matters into her own hands. Her actions lead to an outbreak of violent events within the Borden household, while at the same time, Lizzie and Bridget become lovers. Lizzie’s father discovers their relationship and forbids Lizzie from having anything to do with Bridget unless it is related to her role as a servant. And then on the morning of 4 August, Lizzie discovers that someone has killed her father… 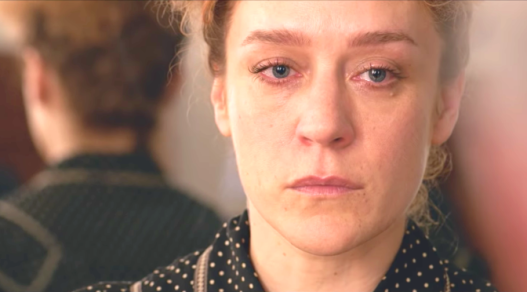 Something of a cause célèbre even now, the murders of Andrew and Abby Borden have become the stuff of gory legend, spawning a famous rhyme (“Lizzie Borden took an axe…”), and maintaining a lurid fascination that is unlikely to dissipate anytime soon. Of course, the main problem with any re-telling of the story is that Lizzie was tried and acquitted of the murders, and no one else was ever accused (though Morse was viewed as a possible suspect for a while). With this in mind, any explanation for the murders must be conjecture only, and Bryce Kass’s chilly screenplay chooses to adopt the theory put forward by crime writer Ed McBain in 1984, that Lizzie killed her father and stepmother after her lesbian relationship with Bridget had been discovered. The issue of the will adds a further twist to the story, and seems as likely as any other reason, but the script approaches these theories as if they are fact, and any ambiguity is abandoned with the recreation of the Bordens’ deaths. Up until then, the movie has established an atmosphere of subdued yet inevitable violence that is almost suffocating; knowing what’s going to happen makes it all the worse. And when it does, it’s almost as cathartic for the viewer as it appears to be for Lizzie.

Lizzie is brought to life thanks to a wonderfully astute performance from Sevigny that highlights both the character’s rebellious nature and the deeper passions that she had to keep hidden. It’s an intelligent, well constructed portrayal that never falters in its conviction and which isn’t afraid to make Lizzie unsympathetic, as in the aftermath of the murders when she appears unperturbed (we see these scenes before we see the murders). Stewart has the more emotional role, and projects Bridget’s discomfort at the situation she finds herself in with empathy and compassion. There’s sterling support from Sheridan as the domineering Andrew Borden, and O’Hare is suitably nasty as the avaricious Morse, but Shaw and Dickens are left with precious little to do except when it suits the screenplay. Macneill directs with a keen understanding that Lizzie feels very much like a prisoner in her own home, and Noah Greenberg’s exemplary cinematography captures and expands on this idea through careful framing and extensive use of close ups. There are some minor issues with pacing as the movie introduces both the characters and the psychological backdrop to their behaviours, and the score by Jeff Russo doesn’t always complement the action, but overall this is an impressive, richly detailed recreation of two visceral, unsolved murders that continue to enthrall and captivate us over a hundred and twenty years on.

Rating: 8/10 – anchored by a sterling performance by Sevigny, and a palpable sense of impending dread, Lizzie is a subtle, yet powerful movie that explores what can happen when repressed emotions remain that way for too long; beginning as a perceptive character study before descending into startling, but necessary melodrama, it’s an intriguing, intelligently expressed piece that is confidently handled and often unflinching in its approach.