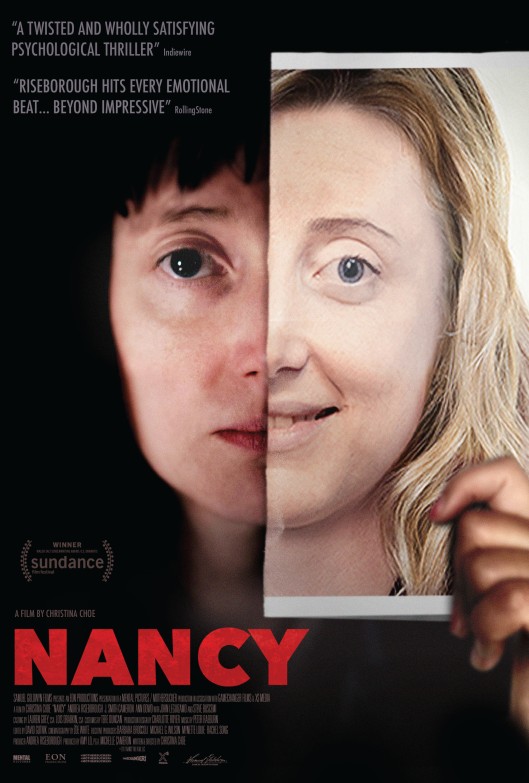 Nancy Freeman (Riseborough) is a thirty-something woman who lives at home with her domineering mother, Betty (Dowd), and does agency work in various dental practices. She writes in her spare time but her work is continually rejected by publishers, and to compensate she also writes a blog offering support to people who have lost children in tragic circumstances. When her mother dies suddenly, Nancy finds herself a little adrift, but when she sees a news report about a couple whose daughter, Brooke, went missing thirty years before, and a picture of what the girl might look like today, Nancy comes to believe that she might be the missing girl. She has the barest of evidence to support any claim – a missing birth certificate is pretty much it – but it doesn’t stop her from contacting the couple, Ellen (Smith-Cameron) and Leo Lynch (Buscem i). Despite some initial misgivings, the couple invite Nancy to visit them. It’s an awkward first encounter, with Ellen clearly hoping that Nancy is her missing daughter, while Leo is more reserved and doubtful. Agreeing to a DNA test, Nancy finds herself staying longer than she planned, but as the time passes, whether or not she is the couple’s missing daughter becomes less and less important…

The debut feature of its writer/director, Nancy is a curious movie that has a clear central idea that is confidently established, but which unfortunately peters out the longer the movie continues. From the beginning it’s also clear that Nancy inhabits her own world, one in which she’s a good samaritan, kind and supportive in a way that her mother isn’t, and through her blog, someone with the best of intentions but the worst of motivations. She agrees to meet Jeb (Leguizamo), a man whose daughter died just hours after being born; Nancy meets him and pretends to be pregnant. Watching her do this, and hearing later how she justifies her behaviour adds a frisson of tension when she hears about the Lynches missing daughter. What lies will she tell? How much will she deliberately mislead them? And how will she justify her actions if the DNA test proves what the viewer – and Nancy – has known all along: that she isn’t the Lynches child? All these questions are answered by Choe as the movie progresses, but it’s still slightly chilling knowing the level of deception that this still grieivng couple are being exposed to.

And therein lies the movie’s central problem: the deception itself and the couple’s reactions to it. Ellen is understandably keen for Nancy to be the real thing, while Leo’s reluctance to believe implicitly in Nancy’s claim is the more rational, and self-protective approach. But this difference in belief never causes any anatagonism between them, and Choe sweeps away any chance that they’ll confront Nancy with their suspicions, preferring instead to present the narrative as a kind of reverse cuckoo-in-the-nest tale where the cuckoo is made completely welcome. This makes the scenes at the Lynches home feel under-developed, as if once Choe had got her characters together she wasn’t quite sure what to do with them. Instead of upping the drama, Choe allows the plot and storyline to move pedantically forward, and the muted energy of the first half an hour gives way to a more stilted, less fluid approach that robs the movie of any impact in the final stretch. Smith-Cameron and Buscemi are entirely credible as the couple who keep finding new hope to alleviate their grief, while Riseborough is astounding as a woman who is unable to reconcile a strong desire to help others with a disturbing lack of empathy. But good though the performances are, they can’t stop the movie from becoming more and more dramatically moribund as time goes on.

Rating: 7/10 – a melancholy look at what can happen when someone who doesn’t understand affection finds herself finally receiving it, Nancy features a mesmerising performance from Riseborough (despite a very unconvincing wig), and impressive visuals courtesy of DoP Zoe White; in wanting to be a haunting tale of unconditional acceptance, the movie continually stumbles, but it finds firmer footing when Nancy is by herself, and the extent of her inability to connect appropriately with others can be fully gauged and understood.