In 1959, in the Suffolk coastal town of Hardborough, Florence Green (Mortimer) decides to open a bookshop on the site of a rundown property called the Old House. The Old House needs more than a lick of paint to make it look presentable, but with the help of a group of local sea scouts, the bookshop is soon open and prospering. Soon, Florence needs the help of an assistant, and duly hires young Christine Gipping (Kneafsey), who proves to be a conscientious worker, and good company as well. Florence’s efforts attract the attention of local recluse, Edmund Brundish (Nighy), and he soon becomes her best customer, despite rarely leaving his home due to his perceived misanthropic behaviour. However, Florence’s efforts also attract the less supportive attention of Violet Gamart (Clarkson), the wife of a local bigwig who has her own plans for the Old House, and who isn’t about to let Florence stop her from getting what she wants. It’s not long before Florence is encountering problems to do with her bookshop, problems that can all be traced back to the interfering Violet Gamart… 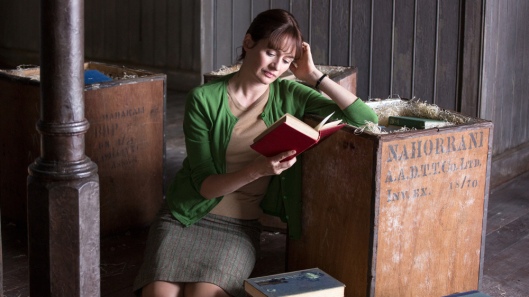 Narrated by an uncredited Julie Christie, and adapted from Penelope Fitzgerald’s novel of the same name, The Bookshop is a subdued, and somewhat musty, tale that is often too polite for its own good. Its easy-going style, and restrained dramatics, make for a gentle, nostalgic trip down memory lane – Llorenç Miquel’s production design and Marc Pou’s art direction put the viewer squarely back in the late Fifties – but also one that is in danger of leaving the same viewer wondering if the movie is ever going to get started. There’s no shortage of incident, but it’s all presented in such a low-key, genial fashion that even when it looks inevitable that Florence will lose the bookshop, the tone and the pace remain the same: even-handed and slow. This may be an attempt at reflecting the time and place in which the movie is set, but if it is, it makes for a disappointing experience. Florence is a forbearing soul, thoughtful, kind and considerate, but it’s a measure of Coixet’s screenplay that on the one occasion she does express the pain and anger she’s feeling, it’s not for herself, and it’s directed at the wrong character. On its own it’s a good scene, but taken as part of the whole, it sticks out by being too melodramatic (though it is also a welcome relief from the blandness of the rest of the material).

Coixet also has a problem with the story’s “bad guys”, the pompous, acidly arrogant Violet Gamart, and her easily manipulated stooge, Milo North (Lance). Violet’s idea for the Old House is to have an arts centre, but the why of such an idea is never fully explained, and her motives remain as shrouded in mystery as the motives for Milo’s duplicitous behaviour late on in the movie. Clarkson and Lance are good in their roles, but they also seem unable to do more with them than is in the script. This may have something to do with Coixet’s direction, which focuses for the most part on Florence’s efforts to introduce modern literature to Hardborough (including Vladimir Nabokov’s Lolita no less), while also accepting the need to include Violet’s behind-the-scenes scheming. The two story strands never really gel together, even when Nighy’s melancholic recluse tries to intervene on Florence’s behalf and takes the (up til then muted) fight to Violet at her home. Keen observers of foreshadowing in the movies will be able to work out the ending long before we get there, but when it does happen, where there should be a sense of irony – or even poignancy – it’s lost in the perfunctory nature of it all. Inevitably then, this is one occasion where the book is much, much better than the movie.

Rating: 5/10 – despite good performances from Mortimer and Nighy, The Bookshop is a sluggish adaptation of Fitzgerald’s novel, and spends too much time being respectful, when it really should have been all the more dramatic; the beautiful Irish locations are a plus, but when the backgrounds are more interesting than the “action” in the foreground, then you know there’s a problem.