In the country of Klopstokia, where the women are all called Angela and the men are all called George, brush salesman Migg Tweeny (Oakie) runs into a young woman (named Angela, naturally) and immediately the pair fall in love. Angela (Fleming) takes Migg to meet her father, who just happens to be the country’s president (Fields). The president is at odds with his cabinet. Led by the Secretary of the Treasury (Herbert), the cabinet is plotting to overthrow him as his policies – or lack of them – have resulted in Klopstokia teetering on the edge of bankruptcy. When Migg realises that many Klopstokians are natural athletes, he suggests the country takes part in the upcoming Olympic Games; if they win, they’ll also collect a large cash reward being offered by Migg’s boss (Barbier). The cabinet take steps to sabotage the president’s efforts and hire femme fatale Mata Machree (Roberti) to seduce the athletes (why isn’t she called Angela?). Only a last-minute intervention by Angela keeps the country’s Olympic dream alive, and it comes down to the last event, the weightlifting competition, to decide if Klopstokia will avoid financial ruin…

If you’re in any doubt as to what kind of comedy is being served up by Million Dollar Legs, then an opening caption should explain everything (as it does about Klopstokia): Chief Exports … Goats and Nuts. Chief Imports … Goats and Nuts. Chief Inhabitants … Goats and Nuts. Yes, we’re in a weird approximation of a European country where anything goes. There’s parody, slapstick, farce, and every other form of comedic license you can think of. There are visual gags galore, razor sharp one-liners, and all courtesy of a group of comedians whose own individual (and often contrasting) styles somehow come together to make the movie one of the most consistently funny releases Paramount ever produced. With a script by Joseph L. Mankiewicz and Henry Myers that was originally written for the Marx Brothers (who turned it down), Million Dollar Legs is so carefree and unconcerned with being disciplined that the viewer has no choice but to go along with it all. Scenes often exist just to be funny, and they bear no relation to anything that’s gone before, or will do in the future. It’s like watching a movie that has only a tenuous sense of story and plot, is more than aware of it, but just doesn’t feel it’s important.

There’s so much to take in and enjoy. Fields ditches his standard curmudgeonly persona and appears looser and more relaxed than usual; the result is a performance that sparkles with comic invention. He’s in good company, too. Oakie shines as the loveable lunkhead he always played so well, Clyde is restraint personified as the president’s major-domo (and fastest man on two legs), Herbert makes his character’s shifty and obsequious behaviour a constant source of amusement, and Turpin pops up unexpectedly here and there as a black cloaked spy with a notebook. Roberti is equally effective in a pastiche Marlene Dietrich role that sees her throw her hips around with the kind of wild abandon that could injure someone. Ostensibly in charge of everything, Cline has no option but to stand back and let his cast loose on the material. Anarchy and preposterousness ensue in equal measure, with side orders of silliness and absurdity. Paramount never made another movie even remotely as harebrained as this one, and though at first glance the Marx Brothers’ rejection of the script might imply that this won’t be as good as one of their own movies, nothing could be further from the truth.

Rating: 9/10 – hugely enjoyable, and with its experienced cast working in effortless fashion, Million Dollar Legs is the kind of movie that modern audiences would be tempted to overlook – and that would be a travesty; alive with comic possibilities and fizzing with imagination, this is hilarious, inspired stuff indeed, and packs more into its relatively short running time than some features manage over twice the length.

NOTE: The trailer below is for a special screening of the movie held in 2010.

When affluent sales executive Brian (Goss) is let go from his job, the childhood trauma he experienced when his father had to declare himself bankrupt, stops him from telling his wife Leanne (Carroll), and soon puts him on the path to contemplating desperate measures.  These arise from a chance encounter with an old schoolmate, Jimmy (Eklund).  Jimmy persuades Brian to go in with him on a quick fire money-making scheme that – so Brian believes – will enable him to stave off his immediate financial problems and also give him time to find another job.  Meanwhile, teen Jesse (Johnston) is looking to get out of town and make something of his life.  He seeks help from his friend Sam (Ballard).  Soon enough, Jesse and Brian cross paths and find their lives are on the line, as Jimmy’s get-rich-quick scheme goes horribly wrong for both of them. 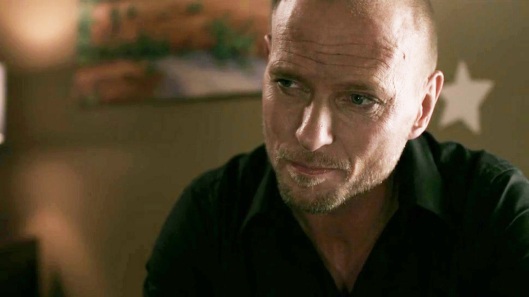 Written and directed by first-timer Donnelly, Pressed benefits most from a committed performance by Goss, and by Donnelly’s attempts to try something different in an already over-stuffed genre.  At first, Goss plays Brian as a naive bystander in his own life, and while this isn’t necessarily the first description you’d apply to an actor like Goss, he pulls off these early scenes with sweaty conviction.  As the movie continues and he has to “man up”, Goss shows Brian’s transition from mild-mannered businessman to determined protagonist with clarity and conviction.

In the director’s chair, Donnelly orchestrates with a (largely) sure hand, allowing his script to play out unhurriedly, and with a greater focus on characterisation than is usual for this type of movie.  A strong case in point is the character of Jimmy, played with brio by Eklund.  Jimmy is a perfect example of how a stereotypical role can be imbued with enough additional nuances to overcome any expected deficiencies.  When Eklund is on screen, his portrayal is so effective you can’t keep your eyes off him.

Where Donnelly does falter is with the movie’s timescale.  When Brian arrives home after being laid off, Leanne and their young son (Ethan Sawyer) are going on holiday for a week.  As the story unfolds it’s clear that events are happening after this period should be up, and yet they don’t return home.  Also, Brian has his car repossessed within a couple of days of being let go – is that really likely?  Against this, Donnelly’s script does avoid the usual cliches, and even finds time for Brian to provide Jesse with some fatherly advice, albeit in the unlikeliest of circumstances.  And the final scenes allow for a pleasing ambiguity.

As the two teens caught up in Brian’s problems, Johnston and Ballard provide strong performances.  Johnston imbues Jesse with a vulnerability that is never at odds with his outwardly tough manner, and is a name to watch out for (though he does have extensive experience in television).  Ballard acquits himself with equal distinction, taking a less showy character in comparison to Jesse, but making him just as memorable.

The action, when it happens, is well choreographed, and the photography by Norm Li – while occasionally lax in terms of framing – has a gritty feel to it, matching the increasingly fervid atmosphere.  The final showdown is tenser than expected, and doesn’t cheat the viewer, giving Brian the chance to make things right on more than a personal level, and convincingly draw the movie to an end.

Rating: 6/10 – the too familiar mise-en-scene detracts from the all-round effectiveness of Donnelly’s debut but it maintains a grim credibility thanks largely to Goss’s well-judged performance; careful plotting gives it an edge over many of its contemporaries.