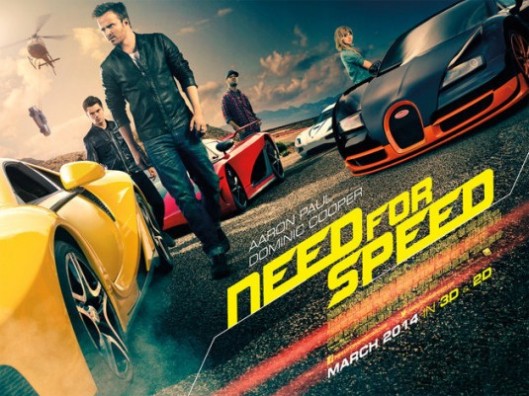 At one point in DreamWorks’ Need for Speed, Julia (Poots) comes out of a gas station restroom and sees Officer Lejeune (Chinlund) in the next aisle.  Immediately she ducks down and tries to sneak her way out.  It’s possibly the stupidest moment in the whole movie – and there’s plenty of others – and makes you wonder if anyone actually read George Gatins’ half-baked, semi-developed script before they committed to filming it.  (The answer is clearly: no.)  Another question that springs to mind is: are the car chases going to be enough to help the movie make its money back?  (Ahh… we’ll get to that.)

Tobey Marshall (Paul) has inherited his father’s auto shop but there are mounting debts he can’t pay, so when old rival Dino Brewster (Cooper) offers him a chance to make $2.7 million on a private race involving Tobey, Dino and Tobey’s friend Little Pete (Gilbertson), he can’t turn it down. But Little Pete is killed in the race, forced to crash by Dino.  With Dino denying any involvement, and hiding the car he was driving, Tobey ends up  spending two years in prison.  Two years later, Tobey is released on parole, and promptly arranges for a car so that he can travel from New York to California and a) take part in a race arranged by mysterious philanthropist Monarch (Keaton), and b) have his revenge on Dino.  Dino is taking part in the race, but Tobey needs a way in as its by invitation only.  With car dealer Julia along for the ride as the car owner’s representative, Tobey gets the car and himself noticed enough times that Monarch gives him a spot in the race.  All he has to do is reach San Francisco within forty-eight hours, avoiding the police and anyone who takes up Dino’s offer of a bounty if Tobey is stopped from getting there.

Naturally, Tobey has help along the way from fellow mechanics and friends Benny (Mescudi), Finn (Malek), and Joe (Rodriguez).  Benny is also a pilot and keeps stealing planes and helicopters in order to provide Tobey with eyes in the sky along the route.  Finn and Joe help refuel the car while it’s in motion, and generally follow along the route Tobey takes in case of back up (which is eventually needed when Tobey reaches San Francisco).  Monarch provides a running commentary on Tobey’s progress, and acts as commentator when the race starts.  Julia provides the inevitable romantic interest, and Dino is the sneering villain we all want to see crash and burn like Little Pete does.  Which leaves Tobey, the mostly silent but determined underdog who should win the race but only if he watches out for dastardly Dino and his habit of running people off the road.

If it seems a little predicable so far, then that’s because it is.  Need for Speed is a movie without an original thought under its bonnet, a handful of barely convincing performances, and lines of dialogue that prove impossible to give credibility to.  It’s movie-making by cliché, a string of ill-thought out scenes and low-key characters whose combined motivations couldn’t power a light bulb.  Once again, it’s the fault of the script, a horrible concoction that almost screams, “Rush job!”  This is Gatins’ first produced screenplay, and it’s ironic that he was an associate producer on a movie called You Stupid Man (2002); he gets hardly anything right.  This leaves the cast to deal with mountains of trite and terrible dialogue, third-rate plot contrivances, scenes so laughable they should be included in a training scheme for aspiring writers – at random: Benny in a military jail asking for an iPad and being allowed to follow the race on it… and all the while the guard holds it up for him to watch – and some of the most perfunctory dialogue this side of a script by George Lucas (have I mentioned the dialogue enough yet?).

With director Scott Waugh unable to breathe any life into the movie when there’s no chase going on, Need for Speed has to depend on its action scenes to gain any brownie points or gold stars.  Much has been made already of the fact that CGI hasn’t been used in the car chase sequences, and that all the smash-ups were done for real.  And so they should be.  But while Paul and Cooper may have spent time learning how to race so they could seen behind the wheel as much as possible, what the filmmakers have failed to realise is that, racing, in and of itself, is only really interesting or attention-grabbing when something goes wrong.  So yes, the car chases are exciting, but only if you find the idea of a car going really fast in competition with another car, and (inevitably) on a deserted stretch of road, to be truly exciting.  On this evidence, it’s almost exciting, but what’s missing is a real sense of danger.  When Tobey is in Detroit and he’s being chased by the police, there’s never the slightest doubt that he’ll get away (and yes, I know that’s obvious, he’s the hero, after all) so the movie drops down a gear or two and makes his escape both a high point and, from a technical viewpoint, a bit of a let-down.

This is the highly regarded “two-lane grasshopper” manoeuvre, where Tobey accelerates up an embankment and powers his car over two lanes of traffic to land safely in a third and drive away without being followed any further – at all.  It sounds like a great stunt, and on paper it is, but in the movie it’s a short sequence made up of five or six different shots (one of which is a long shot of the car in mid-flight), that doesn’t let the viewer see it happen in one fluid take (unlike, say, the bridge jump in The Man With the Golden Gun (1974).  It’s like the scene in Speed (1995) where the bus has to jump the gap in the freeway; it was done for real, but the way it’s cut together leaves you thinking it wasn’t.  Sadly, it’s the same here.

There are some positives, though.  Keaton – on a bit of a roll at the moment – reminds us just how exciting a performer he can be, and lifts the movie out of the doldrums whenever he’s on screen.  The crashes, when they happen, are spectacular and thrilling, and a testament to the creative abilities of the stunt team; they all look suitably life-threatening.  Paul and Poots, reunited after appearing together in A Long Way Down (2014), have a chemistry that helps their scenes immeasurably, and the location photography ensures the movie is nothing less than beautiful to look at in places.

Rating: 4/10 – fans will disagree but Need for Speed doesn’t have that kinetic charge that would have elevated it above other chase movies; the script’s deficiencies hurt it tremendously, too, and no matter how fast Messrs Paul and Cooper may try, that’s one (very major) problem they can’t outrun.