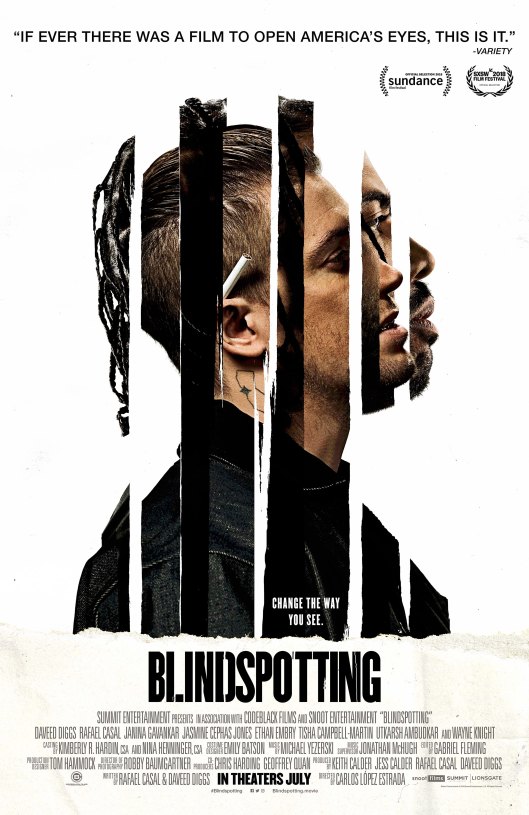 Nearing the end of a year’s probation following a prison sentence for aggravated assault, Collin Hoskins (Diggs) is doing his best to avoid any trouble. With three days to go he’s living at a halfway house, and working with his best friend, Miles (Casal), at a removals firm called Commander Moving. One night while he’s driving back to the halfway house, he witnesses a white police officer (Embry) shoot an unarmed black man. Unwilling to jeopardise his probation, Collin elects not to come forward, but he does begin to experience nightmares about the shooting, nightmares that make him question if he’s done the right thing. Matters are further complicated by Collin’s ex-girlfriend, Val (Gavankar), working at the removal company, and Miles’ often irrational behaviour, such as buying a gun when he doesn’t need one, and giving in to violent outbursts. As Collin nears the end of his probation, two incidents involving Miles threaten his impending freedom, and he’s forced to wonder if remaining friends with Miles is going to allow him to move on with his life…

Nine years in the making, Blindspotting is the brainchild of Messrs Diggs and Casal, and a movie that aims to show what life is really like in today’s Oakland community, with all its racial variety and simmering intolerance. It’s a heady mix of comedy and drama, with a lot to say about racism, prejudice, and the title term, a phrase that means always seeing what your mind tells you is there instead of looking more closely. It’s an apt phrase for much of what causes pain and suffering in the world, our inability to see beyond what we want to see, and it’s brought out beautifully in a split screen exchange between Collin and Val that explains their whole relationship in a nutshell. The movie is full of perceptive moments like this one, with Diggs and Casal’s script being far more nuanced than anyone might have expected, and along with prejudice and the skewed perception people can have about us, it also examines notions of racial identity (and identification), as well as Oakland’s sense of its own identity now that the area is becoming more and more gentrified. Collin is wondering how he’s going to fit in once his probation is over, but as he’s reminded, he’s now known forever as a convicted felon – and how do you adjust to that?

Miles, on the other hand, knows where he fits in, but maintaining his place is his particular burden, as he too feels threatened by the changes in the community. Loudmouthed and brash, and prone to inappropriate behaviour, Miles is a relic of the past, a dinosaur unwilling to accept that his ways are fast becoming unacceptable, and threatened by the possibility that he’ll lose everything he’s achieved (and particularly his family). As Collin begins to question his future role, Miles is forced to examine his, and for both men it’s not a comfortable situation to be in. How they deal with all this is the crux of a movie that grows in confidence and charm the longer it goes on, and the script is peppered with small gems of observation, and moments of quiet introspection that perfectly complement the more dramatic scenes, such as Collin jogging through a graveyard where the dead all stand by their headstones. With so many disparate elements at work, and all needing their own moments to be effective, it’s a relief to see that Estrada (making his feature debut) never loses sight of what a scene is saying, or how best to get that message across. Directing with an honesty and a focus that boosts the material, Estrada takes Diggs and Casal’s screenplay and invests it with a sincerity and a sense of purpose that makes the narrative feel all the more impressively handled. And with both Diggs and Casal giving excellent performances, this is one occasion where being an indie movie with a voice is easily it’s best recommendation.

Rating: 9/10 – without a bum note anywhere to be had, and without resorting to cynicism or a jaded attitude, Blindspotting proves itself to be one of the most astute movies of 2018; hopefully it won’t be the last time that Diggs and Casal put together a script, but if they do, let’s hope that we don’t have to wait another nine years for it, and that it proves as hilarious, thought-provoking, sensitive, intense, and enjoyable as this is.