Clover Catto (Kendrick) is a trainee veterinarian who hasn’t been back to her home since she was eighteen. Home is the Somerset cattle farm she grew up on, but a falling out with her father, Aubrey (Troughton), has kept her away. When she receives news that her brother, Harry (Blakemore), has died – by committing suicide – she returns home against her better judgment for the funeral. There she finds her father in denial over the way Harry died: he keeps saying it was an accident, but as Harry put a shotgun in his mouth and pulled the trigger, Aubrey’s assertion is obviously his way of dealing with it all.

Clover is shocked to see how much the farm has deteriorated since floods hit the area some months before. The main house is in a state of disrepair since part of the roof fell in, and Aubrey is living in a mobile home. Also, Aubrey transferred ownership of the farm to Harry just before he died, but some of his recent actions are hard to understand. Aubrey had arranged for some of the livestock to be sold, only for Harry to cancel the sale. And the discovery of a number of dead badgers, all of them shot (something that’s illegal in the UK), further adds to the mystery of Harry’s mindset in the days before he committed suicide.

In the wake of all this, Clover and her father find themselves at odds over Harry’s death and the reopening of old wounds, their fractured relationship hanging on by a thread as they try to be civil with each other, and not let the past influence their present day actions. But as the truth surrounding Harry’s death comes to light, and Ellie understands both her own role in the tragedy, and her father’s, what has appeared to be a senseless tragedy becomes something that hits much closer to home, but which also has the potential to reunite Ellie and Aubrey after so many years of blaming each other for the distance between them.

The first feature from British moviemaker Hope Dickson Leach, The Levelling is a largely subdued, bitterly poignant movie about the different ways that grief can affect people, and the different ways that people deal with it. Clover tries to deal with her grief by questioning everything she sees and hears going on around her, from her father’s apparent emotional absenteeism, to her own physical absence from the farm at a time when her brother needed her. Clover has questions for her father, for her brother’s best friend, James (Holden), and in time, she has some for herself. As she gathers the various answers she receives, and begins to put them all together, Ellie discovers that her brother’s death isn’t as straightforward as it looks, and that her father isn’t as culpable as she believes. 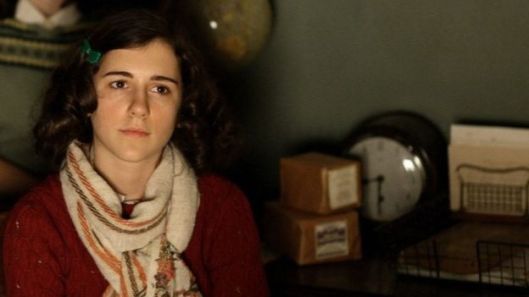 Essentially a two-hander, the movie makes it clear that there are underlying tensions between Aubrey and Clover, and that these stem from her childhood. The issue of whether or not Aubrey was a good father is cemented early on, but as with Clover’s proprietary notions of innocence in her brother’s death, things aren’t as cut and dried as they may appear. There are faults on both sides, and perceived memories play a significant part in the way the two treat each other. As a result, Clover views her father with suspicion and mistrust, while Aubrey views his daughter with disappointment and enmity. Neither is entirely right or wrong in their assumptions and beliefs about each other, and the movie shows just how these unresolved feelings have driven a wedge between them, and how difficult it will be for them to reconcile their beliefs.

Harry’s role in everything though, is the reason for the distance between them. The movie tells us little about him at the beginning, but as the story unfolds, and we learn more and more about him, his death takes on the nature of an unavoidable – and possibly predictable – tragedy. In time, we discover that Harry – and despite all initial evidence to the contrary – would have been a responsible farmer, and probably much better in his way than either his father, or indeed his sister, who harbours a further resentment toward Aubrey because he didn’t transfer ownership of the farm to her. The movie explores this beleaguered family dynamic with a deft awareness of the way in which a combination of resentment and grief can cause further alienation between already distant individuals.

Although not a movie that is likely to appeal to mainstream audiences, The Levelling is nevertheless a powerful examination of grief and its debilitating effects that is effectively realised, and presented with a great deal of insight. Though this might seem a “difficult” subject, Leach ensures that her treatment is accessible (if a little too morose at times), and thanks to two excellent performances from Kendrick and Troughton, doesn’t deal in platitudes or trivialities. As the prodigal daughter not wanting to return, Kendrick’s sobering features and tensed up body language make for a convincing portrayal of a woman whose family role has never been clear to her, while Troughton’s quietly anguished performance as Aubrey more than adequately displays the character’s refusal to see beyond the surface of the problems that surround him.

Leach makes full use of the beautiful, autumnal Somerset locations, and in partnership with DoP Nanu Segal, uses the surrounding countryside to provide the movie with another character, and one that’s integral to the story being told. Leach also creates a strong sense of atmosphere (though again, it’s a little too morose at times), and gives the material a moving, impassioned quality that belies its somewhat dour compositions and decluttered narrative approach. It’s a movie to admire perhaps, more than to enjoy, but with a strong emotional core and moments of devastating incisiveness, it’s also a movie that remains constantly surprising and constantly rewarding.

Rating: 8/10 – an intelligent and (yes) thought provoking tale of the agony that comes with bereavement, The Levelling is formal and yet audacious, and a penetrating look at the pain that grief can cause; with Leach proving to be a writer/director to look out for in the future, this is a first feature that shows how grief can be used as a way of expressing deep-seated regret, and as a cleansing means of reconciliation.