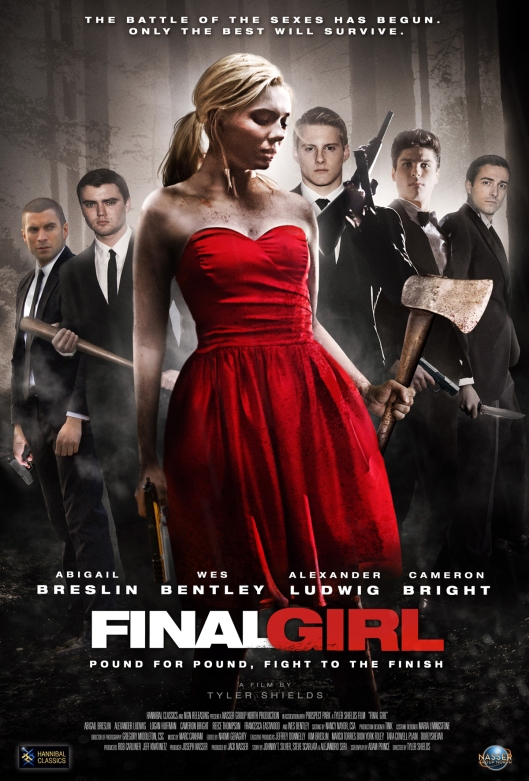 Following the death of her parents at a young age, Veronica (Breslin) grows up in the care of William (Bentley), who trains her to become an assassin. Years later as a teenager, she’s told about a group of four young men whose idea of fun is to take young women out into the woods and hunt them before killing them. The group is led by Jameson (Ludwig); at the diner where the four meet, Veronica attracts his attention and he insists she meet him there the following Saturday night. Before he meets her he picks up his friends, Shane (Bright), Nelson (Thompson) and Danny (Huffman).

The group take Veronica out to the woods where at first they play a game of truth or dare. When she mentions the name of their last victim, they start to become suspicious, and it leads to a dare called Die. Jameson explains that Veronica will be given a five-minute head start, and then she’ll be hunted down and killed. As she heads off into the woods they’re unaware that the tables will soon be turned on them, and the kind of prey you’re used to hunting will prove to be more than a match for all of them.

With so much unexplained or explored, Final Girl could well be the most frustrating movie of 2015. A degree of mystery is fine in any movie, but here it’s taken to extremes, with motivations, actions and the reasons for certain decisions left out altogether; all any viewer can hope for is that it all makes sense in the end. Sadly, thanks to Adam Prince’s poorly constructed screenplay, it doesn’t, and ends with a scene that adds preposterousness to an already ridiculous mix (the inclusion of some hallucinations doesn’t help either). We never learn why William takes Veronica under his wing, or why he trains her to be an assassin, or why the group do what they do, or how they’ve managed to kill twenty blonde young women and gotten away with it for so long in what appears to be a very small town.

The movie isn’t helped by a visual style that relies on spot lighting to make the woods look like a fairground (at night), and a wintry aesthetic that adds to the movie’s unappealing plot. With its Red Riding Hood overtones and cod-indie dialogue allied to a  hunt sequence that is anything but a hunt sequence, the movie becomes buried under the weight of its ill-conceived storyline(s) and never manages to dig its way out. Breslin is miscast, while Bentley’s efforts to be taciturn and remote seem more of a reflection of his wondering why he agreed to take part, and Ludwig doesn’t even try to make his character anything more than cruelly manipulative (which only goes so far). Shields, making his first feature, is out of his depth, and unable to make more of the script’s shortcomings, leaving the viewer stranded with no lifeline to cling onto. By the movie’s end, all you can hope for is that there won’t be any more of Veronica’s “assignments” in the future.

Rating: 3/10 – to paraphrase a popular saying, “awful is as awful does”, and Final Girl is pretty awful; seriously underwritten, and with the barest connection to credibility, the movie tries to be a psychological thriller without having the remotest idea of how to combine the two elements and make them work.