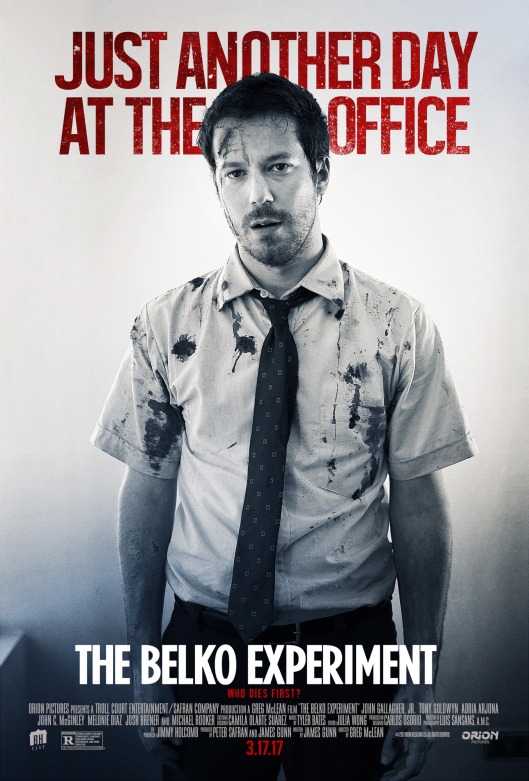 On the outskirts of Bogotá, Colombia, Belko Industries has an office building where its mostly American, relocated staff, help other American companies set up in South America. The office building has been open for a year, and the eighty American staff that work there have what are called “trackers” implanted in the back of their heads in case of kidnappings. If any member of staff is kidnapped, these “trackers” will make them easy to find and rescue. One day, Mike Milch (Gallagher Jr), a Belko employee, arrives to find the local Colombians who work there are being sent home, and this is being overseen by a group of security guards Milch has never seen before. Inside the building, Evan (Earl), the building security guard, admits he doesn’t know what’s going on, and neither does anyone else, not even the COO, Barry Norris (Goldwyn).

While the staff talk over this strange development, new starter Dany Wilkins (Diaz) begins her first day, while Norris’s assistant, Leandra Jerez (Arjona), bemoans the unwanted attention of colleague Wendell Dukes (McGinley). Unwanted because he won’t take no for an answer, and also because she’s in a relationship with Milch. As the rest of the morning gets under way, a tannoy announcement heard throughout the building informs everyone that unless two people are killed in the next thirty minutes then more people will die as a consequence. No one takes the announcement too seriously, even when shutters come down that seal everyone inside the building (though the roof remains accessible). When no one is killed, four people die when the “trackers” in their heads explode. 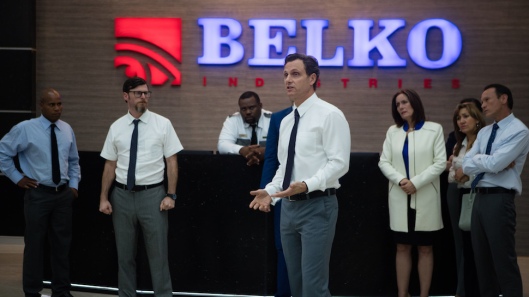 Realising the danger from the “trackers”, Milch tries to remove his but the voice from the tannoy announcement starts a countdown to its being detonated. Milch stops, and the next time the voice gives instructions they’re even more chilling than the last: unless thirty people are killed in the next two hours, sixty people will be killed just as randomly as the previous four. From this, two distinct factions form amongst the employees: those who, like Milch, think no one should be killed (and an alternative solution found to their predicament), and those who, like Norris, think that thirty deaths is better than sixty. What follows pits employee against employee, and engenders a complete breakdown of morality and compassion.

Working from an old script by James Gunn, The Belko Experiment – to paraphrase the title of a Werner Herzog movie – could almost be called James Gunn, James Gunn, What Have Ye Done. While the basic premise is sound, here the “execution” is less than satisfactory, as the finished product lacks clarity, subtlety, and is only consistent in its lack of clarity and subtlety. If Gunn was attempting to write a straightforward schlock horror movie combining equally straightforward ideas regarding the erosion of social and moral restraints in a highly charged atmosphere, then in one sense that’s what he’s done. But if that is the case, and though much of that approach to the material is still in place, director Greg McLean’s interpretation still leaves a lot to be desired. 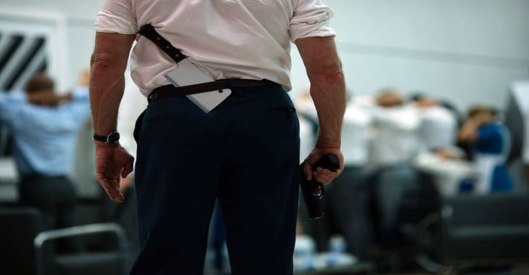 Following on from the dreadful outing that was The Darkness (2016), McLean makes only partial amends with this, focusing his efforts too quickly on getting to the kind of indiscriminate carnage that is the movie’s raison d’etre. Forget social commentary, forget a knowing critique of office politics, this is all about seeing how fast a group of (apparently) average people can descend into homicidal rage and leave rational thinking behind. On that basis alone the movie is more successful (the answer is quicker than you can say “exploding head”). But once all the niceties are done and dusted, and we get to know who’s going to be a hawk and who’s going to be a dove, then it’s on with the murky motivations and desperate attempts at credibility.

It’s always problematical when you have characters such as Milch proclaiming that no one should be killed, and then, by the movie’s end he’s on a par with psycho colleagues Norris and Dukes in terms of how many people he’s despatched. It’s not addressed because it doesn’t suit the needs of the movie, and yet if it had, it would have gone some way towards giving the movie some much needed depth. As it is, Milch takes to murdering his colleagues with as much gusto as he can manage, and any blurring of the lines that was intended on the part of the script is forsaken in favour of more killing. But with the body count rising, the movie feels rushed and even more implausible, and the problem of killing off the remaining seventy-six employees becomes more important than any moral considerations. 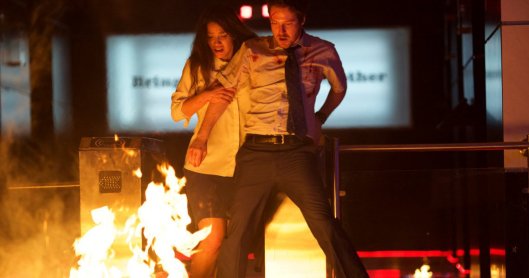 It could be argued that to expect any depth in a movie that’s only concerned with coming up with as many inventive deaths as it can in ninety minutes (death by tape dispenser anyone?), is something of a fool’s errand, but The Belko Experiment also lacks style and wastes its talented cast. Saddled with woefully underwritten characters who practically scream “stock!” every time they speak, the likes of Gallagher Jr, Goldwyn and Arjona get to mouth platitudes and banalities at every turn. Spare a thought for McGinley though; his character is so relentlessly one dimensional it’s amazing he doesn’t disappear when he turns to the side. There’s no one to care about – surprise, surprise – and as the movie progresses, the average viewer might feel justified in wanting to get inside the building and culling the employees themselves.

With its stock characters, muddled narrative, and laboured editing courtesy of Julia Wong, The Belko Experiment is unlikely to impress anyone but the most ardent gore fan. They’ll enjoy the numerous exploding heads, and one particularly impressive skull injury, but there’s really little else to recommend a movie that poses lots of questions at the beginning of the experiment, and then forgoes providing any answers. With a coda that attempts an explanation for what’s happened that’s as baffling as it is shallow, as well as shamelessly trying to set up a further movie, the movie should best be viewed as an old-style exploitation flick given a modern polish. However, that would be doing a disservice to old-style exploitation flicks.

Rating: 4/10 – insipid and unconvincing, The Belko Experiment is yet another nail in the coffin of Greg McLean’s directing career; it also acts as further proof that when successful writer/directors have old scripts to hand, they shouldn’t always be made into movies. 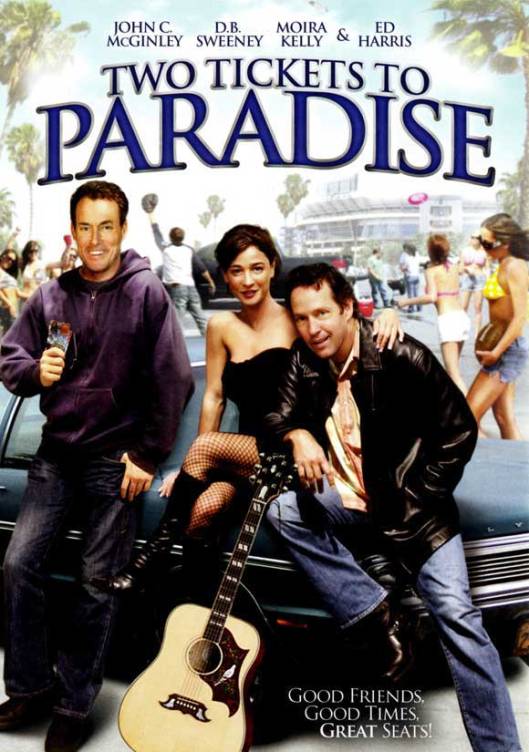 aka Dirt Nap; Life’s a Trip

Three friends, Mark (McGinley), Jason (Hipp) and Billy (Sweeney), embark on a road trip to see a championship football match, partly because they haven’t done anything together like this for ages, and partly to escape the troubles they each have at home.  Mark is a gambler, in deep with his bookie. When a collector (Brian Doyle-Murray, the movie’s co-scripter) comes to his home, his wife Sherry (Jones) takes their son away with her until Mark can get his gambling under control. Jason is a bit of a nerd, disrespected by his work colleagues and unlucky in love; he just wants to break away from the small town ties that bind him. And Billy, a singer who never saw a musical career materialise and who now works in a warehouse, has discovered his wife Kate (Kelly) is having an affair.

On the way to the game the three friends must overcome the usual hurdles – losing their map, arguments amongst themselves, deciding whether or not to fake their deaths, to ingest hallucinogenic mushrooms or not to – and find the inner strength to make their lives a whole lot better. 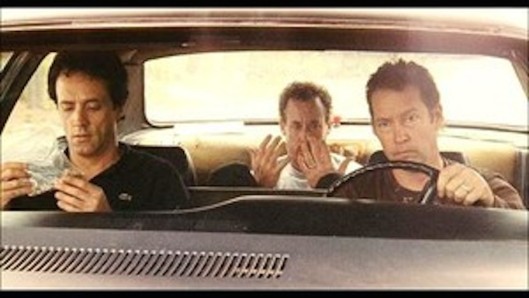 To date, this is actor D.B. Sweeney’s only directorial outing, and while Two Tickets to Paradise is wildly uneven and struggles to maintain its dramatic focus, there is still much that works. Working from his own (co-written) script, Sweeney’s strengths as a director come to the fore in his handling of his cast. McGinley and Hipp give life to otherwise stock characters, and the supporting cast add flavour to the proceedings.  The lead trio have a great chemistry together and if the resolutions to their individual dilemmas are entirely predictable, then it’s no fault of theirs.

Where the movie fails is in its structure and its storyline. The events that happen during the road trip don’t always ring true, especially when the guys try to impress three stoned young women and Jason ends up remarking on one woman’s “hoe tag” (tattoo); it’s a horribly misogynistic moment that sits uneasily with the movie’s mainly light-hearted approach. There’s no urgency about the trip, even when they lose their car, and it seems as if the game is weeks away. Sherry has a change of heart about Mark and decides to meet him at the game, but misses him, only to reappear later when one of them ends up in the hospital (and how did she know they were there?). Likewise the collector, who finds Mark at a motel they hadn’t booked ahead of time.

There’s also a recurring subplot involving Billy’s inability to stand up for himself. Time and again Mark tries to goad him into reacting, and while it’s fine once, by the fourth time it’s not only tired but frustrating as well (we get it!). Add to that the unlikely romance between Jason and Janice (Dilsey Davis), born out of a shared love of darts, and you have a movie that fails to work in so many ways that it almost becomes distracting.

I say “almost” because even with all this, Two Tickets to Paradise is a lot of fun to watch. It all hinges on the performances, and the humour Sweeney and Doyle-Murray have imbued the script with. The three leads are obviously having fun and this comes across as they make the best they can of often very thin material. (It would be interesting to know if there was any improvisation that made it into the final cut.) The humour, while broad at times, is still underplayed by all three, and there are plenty of one-liners that hit the mark with well-timed accuracy. Add in a touch of pathos here and there, and Two Tickets to Paradise proves vastly more effective on the comedy front than it does with the dramatic.

Rating: 6/10 – hit-and-miss throughout but on the whole an entertaining movie with enjoyable performances from its leads.