Haunted by her past – abused by her mother as a child, sent to prison for attempted murder when she was a teenager – Baek Sang-ah (Han) works a number of jobs including that of a masseuse, and is in a relationship with a police detective, Jang-seop (Lee), that she’s largely indifferent about. But when she sees a small child on the streets, one that isn’t wearing a coat (it’s winter), looks as if she’s been mistreated, and is as reticent as Baek was as a child, it awakens feelings in Baek that she’s unprepared for.  She takes the child, Ji-eun (Kim), to have some food but their time together is cut short by the arrival of Joo (Kwon), the partner of the girl’s father (Baek). Reluctantly, she parts company with Ji-eun, but later sees her again, this time with fresher injuries. Determined to ensure that Ji-eun is protected, she tries to have the father and partner arrested, but little is done, and Ji-eun continues to suffer. When she escapes from her home, Ji-eun is found by Baek who decides that the little girl isn’t going back. But Joo has plans of her own… 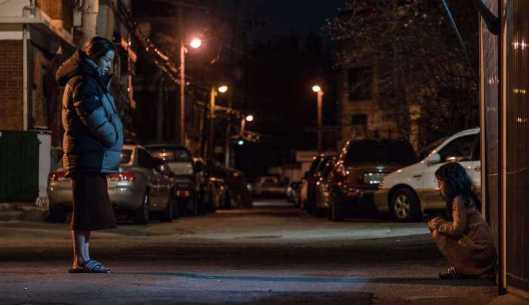 A sombre, uncompromising thriller that has a number of uncomfortable moments where Ji-eun is subjected to the kind of physical abuse that will make you wince and want to look away, Lee Ji-won’s feature debut is typical of middle-tier South Korean movie making in that it features a somewhat fractured narrative, oddly truncated scenes, characters whose behaviour and motivations can often change in the course of said scenes, and a fuzzy approach to morality that allows for acceptable violent retribution one moment but not the next. Apparently based on a true story, but with the details changed, Miss Baek is nobody’s idea of “entertainment”, determined as it is to show the darker side of humanity, but it isn’t short on hope for its main characters, or providing chances for personal redemption. Having been so far unable to forgive her mother for abusing and then abandoning her as a young child, Baek has carried her anger with her and used it to maintain a safe distance from everyone around her, including Jang-seop. But as she and Ji-eun spend more and more time together, her perspective on her own childhood begins to change, and Baek comes to realise that her actions now are directly related to her past. And yes, it is as simple as not wanting Ji-eun to continue suffering the kind of abuse she herself suffered. 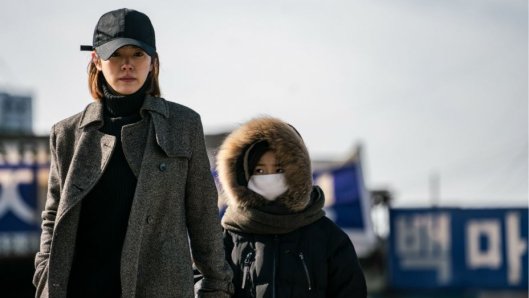 This straightforward motivation propels much of the movie’s second half, as Baek takes matters into her own hands, while Jang-seop struggles to keep up in terms of making sure Baek isn’t arrested for kidnapping, and investigating what’s really going on in Ji-eun’s home. It’s a good job he’s on board as Lee’s script portrays the rest of the police force as either lazy, incompetent, or both, their attitude towards the abuse of a child being of the “it means lots of paperwork” variety. Whether this is an indication of prevailing sensibilities in South Korea or is just dramatic license, it still feels like a clumsy narrative device to keep the plot going, and there are too many other moments where Lee prods the story back into life when it’s on the verge of stalling. This makes for an uneven movie that never feels certain if it’s a crime thriller with a bordering on cartoonish main villain, or a sincere statement about the evils of child abuse, or an exercise in personal redemption as emotional therapy. It’s actually all three, but they don’t always gel together, and despite solid performances from Han and Kim, the connection between Baek and Ji-eun feels under-explored. That said, many of their scenes together are genuinely affecting, and Han does sorrowful with aplomb. Again, it’s a tough movie to watch at times, and deliberately so, but it’s not so disturbing that it can’t provide a happy ending (of sorts) to help viewers go away feeling more settled.

Rating: 7/10 – despite some obvious flaws in the narrative, and a penchant for melodrama that mars the movie’s final third, Miss Baek is an otherwise confidently handled debut from Lee, and one that doesn’t hold back from showing the physical and emotional consequences of child abuse; gritty and realistic, and shot in an abrasive, defiant manner by DoP Kang Guk-hyun, this is the kind of movie that if it were to be remade by Hollywood, would be robbed entirely of the harshness that makes it as effective as it is.