When ace district attorney Victor Scott (Robinson) gains a conviction in the case of wife murderer Edward Clary (Star Trek’s DeForest Kelley), he couldn’t be more pleased as it maintains his impressive run of convictions.  Clary is sentenced to be executed but as he goes to the chair, a death bed confession by another man proves Clary’s innocence.  Alerted to the confession, Scott tries to halt the execution but is too late.  His professional reputation in tatters, Scott takes to the bottle.  Self-pitying and pushing away anyone who might help him, particularly his assistant Ellen Miles (Foch), Scott eventually pulls himself together but determines to take on only defence cases from then on.  In the process he falls in with local gangster Frank Garland (Dekker).  Scott defends Garland’s men when they end up in court, and on one occasion goes to extreme lengths to gain an acquittal.  Soon he begins to regret the course he’s chosen and tries to extricate himself from Garland’s clutches.  And then Ellen ends up on trial for the murder of her husband Ray (Marlowe), giving Scott a chance to redeem himself for the mistake he made with Clary, and ensure that Garland is brought to justice. 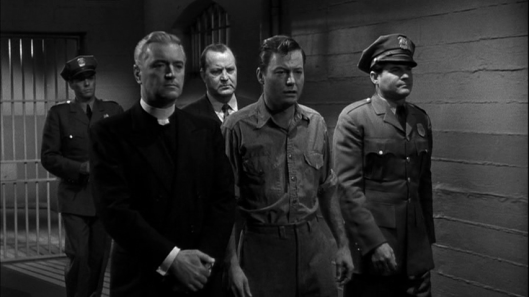 A remake of The Mouthpiece (1932), Illegal is a fast-paced courtroom drama with fine performances (though Foch can be a trifle stiff at times), and an early appearance for the buxom Mansfield.  Some of Scott’s motivations are a little bit hazy, especially when he begins working for Garland, but Robinson, consummate professional that he is, doesn’t allow this to interfere with the need for pushing the story forward.  As Garland, Dekker is a great foil for Robinson, and gives a firm reminder of why he was such a reliable supporting actor in the Forties.  There are a number of twists and turns, a mole in the DA’s office who must be uncovered (though the culprit is revealed early on), the usual lack of a romantic involvement for Robinson (he never did that well with the ladies), and some typically hard-boiled dialogue chewed on with relish by the largely male cast.

Directed with flair by Brit-born Allen (also responsible for The Uninvited – see review posted on 31 October 2013), Illegal is a legal potboiler that still retains a great deal of charm and is a pleasant enough way to spend an hour and a half.  On the downside, the sets are quite drab – evidence of a tight budget – and the photography is perfunctory, composed largely of medium shots.  It’s mostly predictable too, but this isn’t a drawback, and while there’s the odd misstep along the way (which might cause a grimace), the movie is an acceptable addition to the genre.  Plus there’s a great score from the ever-reliable Max Steiner.  There’s always an in-built reassurance with this type of movie, and if you’re a fan, you’ll be pleased you caught up with it.

Rating: 6/10 – minor problems with production values aside, Illegal benefits from a committed turn by Robinson and assured direction by Allen; not a classic but enjoyable nonetheless.

Adapted from the novel, Uneasy Freehold, by Dorothy Macardle, The Uninvited is Hollywood’s first attempt at a ‘serious’ ghost story. When siblings Roderick and Pamela Fitzgerald (Milland and Hussey) discover Windward House on the rugged Devon coast, they have no idea what they’re letting themselves in for when they purchase it from the house’s owner, Commander Beach (Crisp). Their dog won’t venture upstairs, the studio room is unnaturally cold, and a previous resident, Mary Meredith, fell to her death from the cliff at the end of the garden. Add to this some ghostly weeping in the pre-dawn hours, the mysterious relationship between Mary Meredith and a trained nurse, Miss Holloway (Skinner), an unfolding back story involving the Commander’s granddaughter Stella (Russell) – who may or may not be the key to all the strange occurrences – and you have the makings of one of the best scary movies ever made. 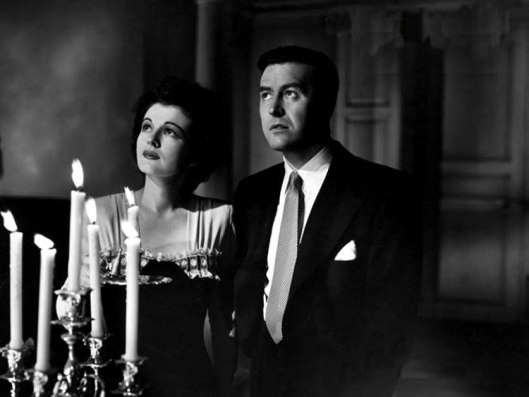 The movie starts strongly with an unnerving voiceover by Milland; it sets the scene perfectly for the events that follow. Once the Fitzgeralds have moved in the sense of foreboding is cleverly and effectively evoked, and the scenes that increase the tension are well-played and directed. The mystery elements are handled with aplomb, and the unfolding of the back story involving Mary Meredith, Stella and Miss Holloway is absorbing and intelligently revealed. The movie uses humour too to underpin the sense of unease, and in Milland’s practiced hands, it’s never over-played or becomes grating. As the movie plays out, the tension thickens until the truth of what really happened in the past is realised, and the showdown with the ghost of Windward House grips like a vise.

The Uninvited is a great movie, superbly and confidently directed by Lewis Allen, with an often chilling, evocative script by the playwright/novelist Dodie Smith (The Hundred and One Dalmatians) and Frank Partos. The roles are well-cast: Milland and Hussey are credible as brother and sister, while Russell excels as the focus of the haunting (sadly, Crisp was distant to her during filming: this was only her third movie and he felt she was too much the amateur). Skinner adds an exotic, otherworldly presence as the trained nurse who knows more than she’s telling, and there’s further comic relief from Barbara Everest as the Fitzgerald’s Irish housekeeper Lizzie Flynn. There’s striking, atmospheric cinematography courtesy of Charles Lang, and a playful yet dramatic score by Victor Young that includes the now-classic composition Stella by Starlight. But it’s art directors Hans Dreier and Ernst Fegté who deserve the most credit, for creating a haunted house that is open and airy and devoid of the usual dark corners and hidden passages that were the staple of previous haunted house movies. It’s this ‘ordinary house’ approach that helps ground the scares when they happen, and which makes for a refreshing change after all the old dark house movies of the 30’s and early 40’s.

Rating: 9/10 – a classic tale that is as fresh today as it was on first release, The Uninvited remains one of the best ghost stories ever committed to the big screen; recommended viewing.