In a small rural town in Ireland, there’s a caravan park called Moody’s that has been closed ever since the death of its owner a few years before. After a stint in Scotland with an aunt and uncle, the owner’s son, Joey (MacDougall), has returned to re-open the site and restore it to its former glory. He’s fifteen. Also arriving in town at the same time is Ronald Tanner (Shortt), desperately in need of money to fund his ailing wife’s medical treatments, and hoping to sell a thousand Chinese made toys to local businessman and political wannabe Gits Hegarty (Smiley). When Hegarty cruelly turns him down, Ronald parks his van at the caravan site overnight while he tries to work out what to do next. However, Joey’s curiosity about what’s inside the van gets the better of him and a badly disposed of cigar leads to the van, and Ronald’s stock of toys, going up in flames. Joey determines to help Ronald in any way he can to make amends, and when they become aware of payments Hegarty makes to a couple of local criminals, they decide to steal the next payment for themselves…

Morgan Bushe’s feature debut, co-written with Greg Flanagan, owes almost its entire existence to the work of the Coen brothers. It’s that kind of movie: an homage that pillages the Coens oeuvre freely and willingly, but alas, without adopting the control over the material that helps to make the brothers’ work so successful. It’s a bleak, misery-driven piece that has trouble expressing itself as the grimly humorous movie it wants to be, and it piles so many setbacks and obstacles onto the shoulders of its ostensible heroes that by rights they should be crushed flat before they even begin to think about robbing Hegarty. Literally nothing goes right for either one of them, from Joey alienating his best friend, Lanks (Parkinson), to Ronald succumbing to the alcoholism he’s kept at bay for so long. As misfits go they’re pretty spectacular in their ability to dig themselves a bigger and bigger hole that they can’t get out of, and it’s obvious that their get-rich-quick scheme is doomed to (relative) failure, but with Bushe determined to put them through the wringer time and time again, any real sense of self-awareness – or self-preservation – is abandoned before it’s even considered. 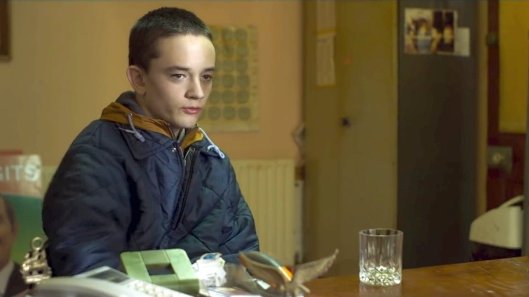 This all keeps the main storyline unfolding with the grim inevitability of a traffic accident that could have been avoided if both drivers had noticed the lights were on red, and though Shortt and MacDougall have their moments, their efforts are overwhelmed by the unremitting obduracy of the movie’s tone, and a mood that swings between cheerless and downbeat as if they were the only two choices available to Bushe, and which suited the narrative. Only Smiley manages to rise above the gloomy nature of the material, and he does so by being openly malign and horrible in a way that suggests he views Hegarty as the kind of moustache-twirling villain who can’t help overplaying his hand at every turn (and not as the arch manipulator that Bushe may have intended). Shot in a deliberately downbeat visual style by DoP Arthur Mulhern that further promotes the oppressive atmosphere that’s cultivated and encouraged throughout, even the sub-plots feature stories that are bleak and disturbing. With all this, it’s hard to believe that there could be any light at the end of the tunnel, there is redemption and hope on offer in the movie’s final scenes, but inevitably, these pale rays of sunshine come too late to save Bushe’s debut from giving the viewer a series case of the miseries.

Rating: 5/10 – a dark and melancholy movie that wallows in the doldrums of its own making, The  Belly of the Whale is as far from a laugh riot as you can get without it being Angela’s Ashes (1999); with only occasional flashes of inspiration, and the odd, unexpected visual flourish to help things along, this “black comedy” may only appeal to viewers who will see Joey and Ronald’s individual predicaments as situations that make them feel better about their own lives. 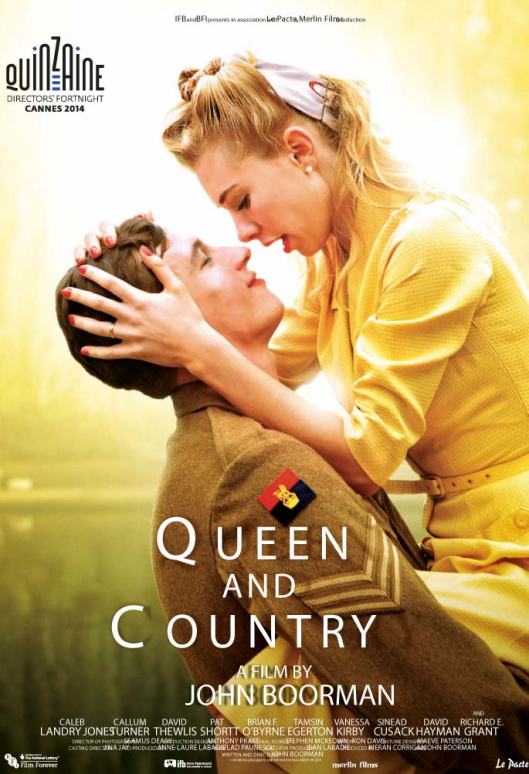 Nine years after the events depicted in Hope and Glory (1987), eighteen year old Bill Rohan (Turner) is nurturing a desire to get into movie making. But National Service comes along and Bill is conscripted into the Army, where his skills lead him – and his friend Percy (Jones) – to teaching other conscripts how to type. With the threat of being transferred to the front line in Korea hovering over them, Bill and Percy make the best of their lot, including continual run-ins with their immediate superior, the punctilious Sergeant-Major Bradley (Thewlis). They find a comrade in skiver Private Redmond (Shortt), and resolve to steal the regimental clock as a two-fingered salute to one of their senior officers, the pompous, overbearing RSM Digby.

While Bill and Percy circumvent the rules with seeming impunity, they also find love: Percy with nurse Sophie (Edwards), and Bill with emotionally distant Ophelia (Egerton). But the course of true love fails to run smoothly for either of them, with Ophelia proving complicit in an abusive relationship, and Percy showing no signs of committing to Sophie. Their run-ins with Sgt-Major Bradley escalate to the point where they turn the tables on him, a decision which has unforeseen consequences. The search for the regimental clock leads Private Redmond – suspected by Digby and Major Cross (Grant), the officer in charge – to ratting on Percy to avoid being sent to Korea. With his friend facing a court-martial, and his affair with Ophelia offering no comfort, Bill’s rite of passage to adulthood proves a rockier experience than he ever expected.

Widely reported as John Boorman’s swan song movie, Queen & Country is a largely disappointing end to a career that has had some tremendous highs – Point Blank (1967), Deliverance (1972), The General (1998) – and one incredible low – Exorcist II: The Heretic (1977). What’s disappointing is that Boorman has failed to inject the same kind of nostalgic bonhomie that made Hope and Glory such a joy to watch. And though the movie is based on Boorman’s own experiences in the Fifties, there’s little here that resonates as effectively as his experiences of World War II. It’s a shame, as the movie will generate a lot of interest due to the warm regard held by its predecessor, but anyone persuaded to watch this as part of a Boorman double bill with Hope and Glory would do well to choose something else (the undervalued Leo the Last (1970) perhaps).

This isn’t to say that the movie is a complete disaster – Boorman is too good a director for that, and the material does have moments where it’s both affecting and heartfelt. Bill’s despair at the actions of Ophelia tugs at the heartstrings, while Bradley’s officious nature hides a man struggling to maintain his sanity. The performances range from the credulous (Jones, all sniggering, body-wracking obnoxiousness), to the pantomimic (Grant, operating at a level of high-strung anxiety that would look less out of place in a drawing-room farce), while Egerton strikes a chilling note as an upper-class object of desire who has no idea of her own self-worth. Turner is okay as the older Bill, but thanks to Boorman’s script, is hampered by being too likeable throughout, and isn’t allowed to show any other facets of the character. But the standout is Kirby as Bill’s rapacious sister, Dawn, a force of nature that the script – thankfully – fails to keep a lid on. References to Bill’s family living near to Shepperton Studios hint at his future endeavours and there’s a lovely final shot that is as succinct as it is emotive. If Boorman is persuaded to continue making movies, his take on starting out in the industry would be well worth waiting for.

Rating: 5/10 – awkwardly irreverent in its dealings with the Army, but on surer ground in its more emotional relationships, Queen & Country is a mix of drama and comedy that never quite gels; with some scenes that feel extraneous, and others that seem burdened by the need to harken back to Hope and Glory, this is a movie that – sadly – promises more than it actually delivers. 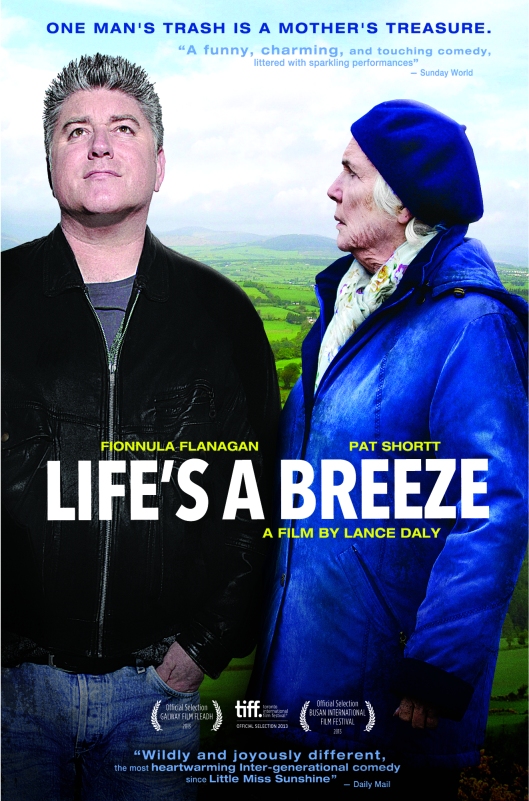 Thirteen year old Emma (Thornton) is tasked with visiting her Nan (Flanagan) twice a day to make sure she’s okay. Nan lives in a big old house with lots of clutter and her layabout son Colm (Shortt). They’re part of an extended family that includes Colm’s brother Des (McCann), his sister Annie (Conroy), Kelly’s mother Margaret (Birthistle) and their various spouses. Everyone has a fondness for Nan but are too busy with their own lives to pay her much attention. One day, Colm asks Emma to take Nan out for the day so that the family can surprise her by giving her home a makeover. When they get back, the clutter has vanished, there’s a new sofa, new kitchen appliances, and a new bed been installed. But Nan has only one question: where’s the mattress from the bed?

She asks because she kept all her life savings inside it, a sum that amounts to almost a million Euros. At first, the family doesn’t believe her but, unsure that she’s not telling the truth, they track down Arthur (Higgins), the man who took all the rubbish away. He tells them it’s gone to landfill, but when they visit the site they’re unable to find it. Nan thinks Arthur’s been lying and they follow him out of town to a place at the side of the road where he dumped everything, but the mattress isn’t there. Then Colm makes the mistake of going on a radio show and alerting everyone to the mattress’s disappearance and the money inside it. What began as a small-scale “search and rescue” mission now develops into a country-wide search for the mattress and the million Euros, and the family in danger of losing everything. 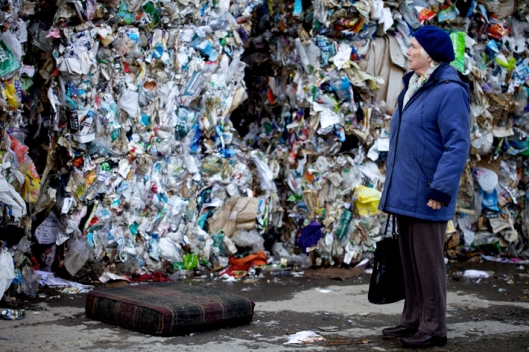 An Irish/Swedish co-production – with some scenes filmed in Sweden – Life’s a Breeze is the type of modest, low-key production that often succeeds just by being modest and low-key. However, while it’s moderately funny and it has a spirited cast who could do this sort of thing blindfolded and with their hands tied behind their backs, the short running time is an indication of how slight the material actually is. It’s also a simple tale, and while it skirts around issues relating to the elderly, personal dignity and avarice, it does so with such a lightness of touch that these attempts at adding some depth don’t always pay off.

That said, it is mildly diverting, and Daly handles it all with a confidence that helps make up for the less than attractive visual design and the often uncoordinated cinematography (Daly again, but uncredited). Ultimately though, the movie’s strengths are its cast and its score. Flanagan portrays Nan with a quiet sense of despair at the “idjit” antics of her family, Shortt does panic like it’s a daily occurrence for Colm, and Thornton displays a maturity that makes Emma the most interesting character of all. And the score – by Daly and Declan and Eugene Quinn – is jaunty and upbeat, and provides a suitably catchy counterpoint to the action.

Rating: 6/10 – with a little bit less going on than meets the eye, Life’s a Breeze is pleasant enough but isn’t likely to remain in the memory for long; boosted by an impressive first-time performance by Thornton, the movie is amusing, moderately charming, and doesn’t outstay its welcome.