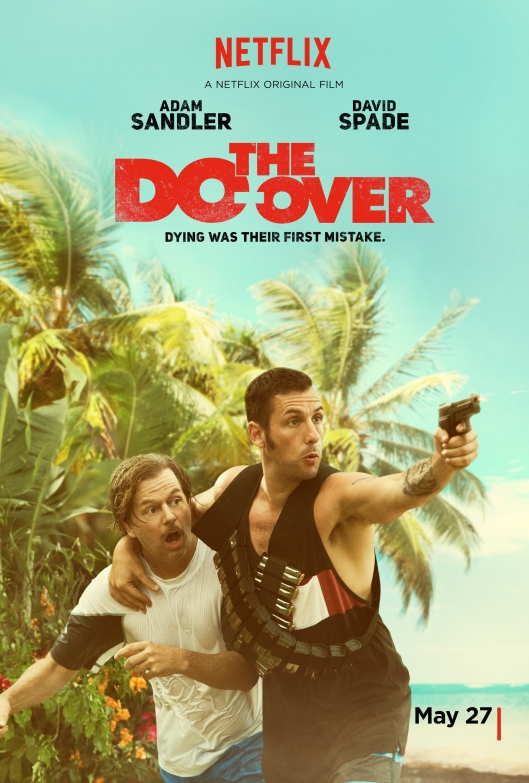 The second movie in Adam Sandler’s six picture deal with Netflix, The Do-Over arrives with probably very little anticipation on anyone’s part except for those die-hard Sandler fans who’ve been helping keep him one of the most well-paid stars in Hollywood (still). But in a strange twist of fate, The Do-Over isn’t as bad as it looks. It’s bad, but considering some of Sandler’s other, more recent movies, it isn’t that bad. (There are all different levels of bad, and Sandler’s probably made at least one movie for each level, but this isn’t quite as low down as some of the others.)

The movie introduces us first of all to Charlie (Spade). He’s dressed conservatively, looks like the kind of guy who’d struggle to be recognised in a selfie, and he’s at a high school reunion watching his wife (Leggero) getting pawed by another man (Astin) on the dancefloor. He might as well have ‘Loser’ tattooed on his forehead. Enter Max (Sandler), perhaps Charlie’s only real friend from their high school days. As they swap stories about their lives since then, it seems Max has exceeded expectations and joined the FBI, while Charlie manages a bank inside a Save & Pay. It isn’t long before Max is encouraging Charlie to change his life and do what he really wants to do, but Charlie lacks the guts to do so. But a trip out to sea on Max’s boat sees Charlie forced to do exactly that, as Max has faked their deaths and they both have new identities: Charlie is Dr Ronald Fischman, and Max is Butch Rider. 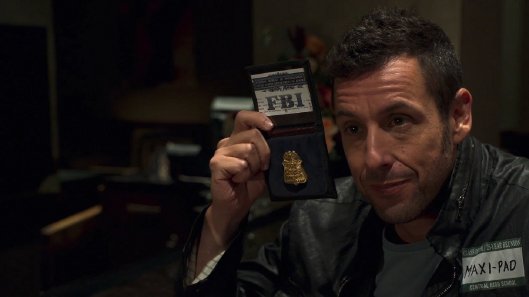 The chance discovery of the key to a safety deposit box leads them to Puerto Rico and a luxury villa that the real Fischman and Rider own. But their new, idyllic existence is brought to an end by the appearance of a hired assassin, the Gymnast (Voges), who tries to kill them. Max gets them both away and in the process reveals that he’s not an FBI agent but exactly what their high school guidance counsellor always said he’d be: a morgue attendant. He wanted to change his life as well, and when the two men arrived at the morgue he took the opportunity to switch their identities. But now it’s clear that Fischman and Rider were involved in something dangerous, and using Fischman’s widow, Heather (Patton), as a source of information, they start to delve into the pair’s recent past, but in doing so, Charlie learns that even now, Max is hiding things from him.

If you’ve read the above synopsis and thought, ‘Okay, that doesn’t sound so bad’, then that’s because it isn’t. There’s more – obviously – and a lot of it is on the same dramatic level. Naturally, this being an Adam Sandler/David Spade buddy movie, there’s a fair bit of humour thrown into the mix, as well as brief moments of romance, and even some neat, uncontrived action beats. But all these elements, well intentioned as they are, remain flat and uninvolving, and despite several attempts at the kind of wacky, minor league offensive material Sandler is known for, The Do-Over consists of one largely unmemorable scene after another, and features Sandler doing what he does best: playing the same character he’s played for over thirty years now. 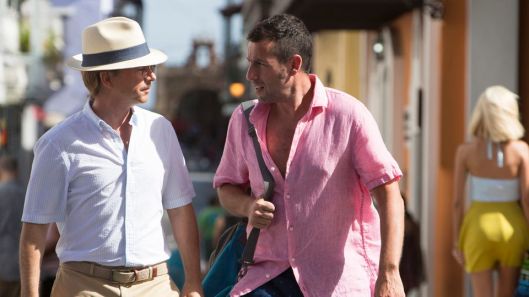 If anyone has to ask, after all this time, why is Adam Sandler still so popular, and why has Netflix decided to enter into a six-picture deal with him, then this movie contains the answer. It’s a quintessential Sandler movie: defiantly silly, with a series of unrelated scenes given a sprinkling of narrative cohesion to help them through; laughs based on personal abuse; visual gags at the expense of one or more of the characters; glamorous location work; and the same just-making-the-required-effort performance from Sandler that he gives in pretty much all his movies. Some may decry these aspects of his work, but Sandler knows exactly what he’s doing: he’s giving his fans what they want, and what they’ve come to expect. And it’s why his movies always make a profit, even the likes of Jack and Jill (2011) and That’s My Boy (2012).

So all that remains is to ask the question, where does The Do-Over fit in with the rest of Sandler’s movies? Well, it’s certainly not as bad as the ones mentioned in the previous paragraph, but it’s also nowhere near as good as, say, The Wedding Planner (1998 – so long ago now), or 50 First Dates (2004). It’s averagely entertaining, largely forgettable, and the script by Kevin Barnett and Chris Pappas doesn’t strive too hard in terms of the basic plot, but it does have moments where the ennui lifts and the shade of a better movie can be glimpsed. Most of these moments involve Spade, who makes Charlie quite endearing at times, and there’s a surprisingly well choreographed fight sequence between Patton and Hahn that’s funny and bruising. As mentioned before, Sandler coasts along but often looks disinterested. Unless he manages to fit in another movie for Netflix, Sandler isn’t due back on our screens until next year in Noah Baumbach’s Yeh Din Ka Kissa, a movie that also features Emma Thompson, Ben Stiller, Dustin Hoffman, and Candice Bergen. Just how he fares in such company will be interesting to see. 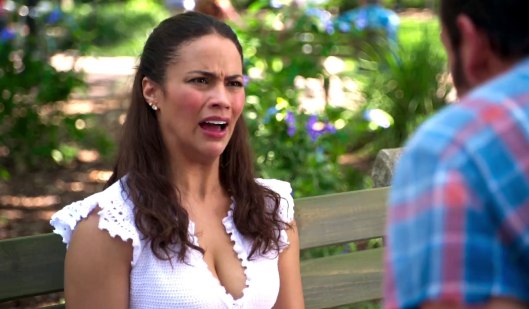 Frequent collaborator Brill keeps things moving at a decent pace, and the Puerto Rican locations are exploited to the full by DoP Dean Semler, yet the movie still manages to shift awkwardly between the tonal demands of the narrative, mixing comedy, drama and thriller elements to muddled effect often in the same scene (Max’s “torture” by the Gymnast is a perfect example). And for once, there aren’t the usual round of cameos from the likes of Rob Schneider et al, a minor blessing in a movie that at least doesn’t outstay its welcome.

Rating: 5/10 – amiable enough while it’s playing, The Do-Over is the kind of comedy that fades from the memory soon after it’s seen; if you don’t expect too much going in then you might be pleasantly surprised, otherwise it’s yet another Adam Sandler movie that it’s hard to get too excited about. 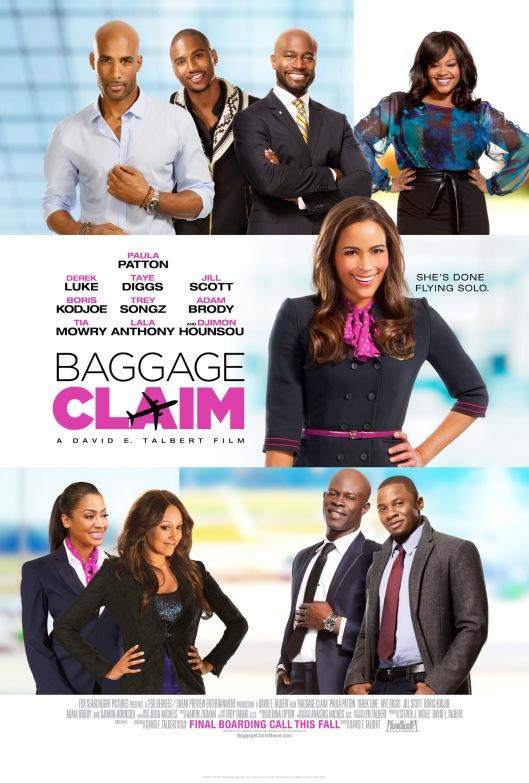 Adapted from his own novel, writer/director Talbert’s ode to the apparent perils of being female, thirty and unmarried, Baggage Claim is a low-key attempt to add something a little bit different to the usual slew of rom-coms hitting our screens these days. Focusing on air stewardess Montana (Patton), the movie opens with her receiving a romantic invitation to spend Thanksgiving with her boyfriend, Graham (Kodjoe). When Montana finds out that Graham is married (and with a pregnant wife), she all but gives up on finding Mr Right.  To make matters worse, her younger sister Sheree (London) announces she’s getting married – and she’s still in college. Consoled by colleagues Gail (Scott) and Sam (Brody), Montana is encouraged to look up her old boyfriends to see if any of them might still be interested in her. With the airline they work for being used as a means of locating these men, Montana “accidentally” bumps into them on flights they make across the country. The outcomes of these meetings vary, and by the time of her sister’s rehearsal dinner – when she’s promised to attend with the “new man” in her life – Montana is on the verge of having to make a potentially life-changing decision, but one that won’t involve getting married. 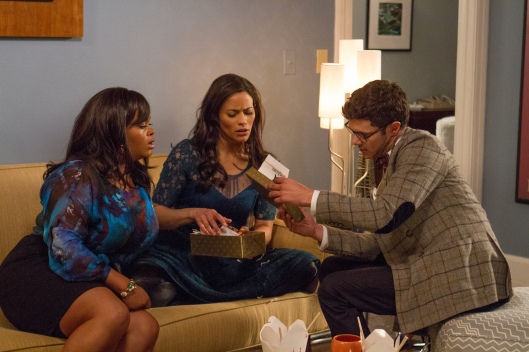 Baggage Claim‘s main strength is that it’s not trying to compete with the Bridesmaids or Bachelorette’s of this world, and is rather an old-fashioned kind of rom-com, with a sympathetic lead character, a traditional romantic hurdle to overcome, and most of the really funny moments provided courtesy of the supporting characters (Scott is hilarious as the boulder-bosomed Gail). Montana’s Mr Right will come as no surprise to anyone, and the road to true love is littered with the usual obstacles and pitfalls. If it all sounds entirely predictable, then you’d be right, but Baggage Claim has a light-hearted sureness of touch that makes it a small-scale winner, and with pleasing performances from Patton, Luke, Diggs and Brody (amongst others), this is one rom-com that doesn’t disappoint on its way to the airport.

Rating: 7/10 – amusing and rewarding throughout, Baggage Claim is a rom-com with lo-cal sweetness; the only question is how come so many men passed over Montana in the first place… when she looks like Paula Patton?