Ah, Roger Corman. Yes, he’s a legend in the movie business, and yes, he’s made some lowest-common-denominator movies over the years, but he’s still highly regarded and his movies still continue to make money (which isn’t difficult as he still doesn’t spend very much on them). But Corman, for all his skill at getting movies made cheaply – and whether he’s directing and/or producing – doesn’t always get it right. For every House of Usher (1960), there’s a Supergator (2007), and for every Piranha (1978), there’s an Escape from Afghanistan (2001). And now you can add, for every Death Race 2000 (1975), there’s a Death Race 2050. A direct sequel to the original movie, Death Race 2050 ignores the three movies made by Universal between 2008 and 2013. Although those movies suffered a serious decline in quality by the third outing (or arguably the second), the move to revisit the milieu created for the David Carradine-starring original came from Corman himself, who felt that what was missing from the Universal movies was the political commentary.

Fair enough, you may think. Political commentary usually worked for George A. Romero, then why shouldn’t it work for Corman? The answer to that question is sharply illustrated when the viewer gets their first glimpse of Malcolm McDowell as the movie’s über-villain, the Chairman. With his floating, white-haired pompadour and “I’m in charge” attitude – and not to mention being surrounded by sycophants – it isn’t hard to think who Corman might be using as the inspiration for the Chairman. But aside from having America renamed as the United Corporations of America, that’s the full extent of any attempts at providing any political commentary or subtext. So with that out of the way, what else do we have? Surely there are some terrific action sequences involving uniquely designed muscle cars, and a wealth of pedestrian kills that are both gory and funny at the same time? And what about a group of weird and wild drivers all out to win the race and dispose of returning champion Frankenstein (Bennett)? Well, no; kind of; nearly; and sometimes. (It’s that kind of movie.)

Sadly, but perhaps predictably, whatever sense of originality or invention was intended to be part of the movie’s make up, has been ruthlessly excised in favour of a succession of appallingly directed, acted, shot, edited and scored scenes that aim for the darkly humorous tone of the original but which miss the mark by such a wide margin that you begin to wonder if it’s all deliberate (it’s the only answer that makes any sense). This is an extremely dispiriting sequel: crass, idiotic, banal, stupid, half-baked, laughable, nonsensical, hackneyed, trite, ludicrous – the list goes on and on. It’s almost as if the makers have taken a cursory glance at the original, made a few notes as to its content, and then decided that the best way to honour it is to make a sequel that trashes the original’s legacy, and in the most derogatory way possible.

From McDowell’s turn as the Chairman – replete with nods to his role in Caligula (1979) – to the decision to have Frankenstein remove his mask once the race gets under way, and to the inclusion of a group of rebels hellbent on disrupting the race for their own inane agenda, the movie flits from one ridiculous idea or set-piece to another with faint regard for its own skewed internal logic, or any interest in maintaining continuity. Almost all the interior scenes of the racers are shot in picture cars, while any scenes where the cars are seen in long shot are either speeded up or so poorly framed that any intended sense of urgency or excitement is over before it’s begun. Death Race 2050 may have been made on a shoestring budget, but watching it is like being privy to a rough cut of a movie and then finding out that the post-production funds have run out already. 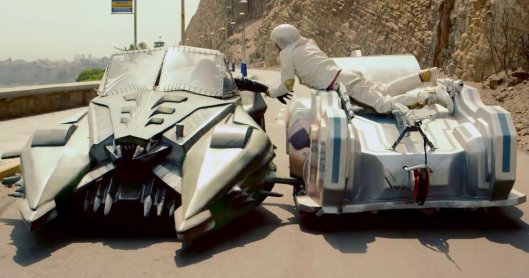 The script – such as it is – is the work of director G.J. Echternkamp and Matt Yamashita. If any congratulations can be afforded them, it’s that between them they’ve managed to concoct a story that makes no sense, and which seems to have been stitched together from a variety of unremarkable sources. To mention all the areas where they’ve undermined their own narrative, or provided grist for the mill of their own incompetence would see this review double in length. But it’s with the dialogue that they’ve truly excelled themselves, coming up with such gems as, “Why did those pilgrims land on Plymouth Rock? Because they needed a place to stage the greatest pissing contest known to Man”, and “I’ll drink your tears, Frankenstein. I’ll lick them off your handsome face.” There are more, and almost all of them are likely to induce groans or slapped foreheads. The cast struggle (it’s the only thing they can do) against all of this, and even stalwarts of this kind of thing such as McDowell and Butler can’t do anything to make much of a difference. The characters all strive for relevance even within the fractured nature of the narrative, but ultimately they’re all hollow constructs whose fate is to be inter-changeable with each other – and even then not that successfully.

With the odds stacked so highly against it, the movie pivots from one ill-considered plot development to another, and relies on exposition-heavy scenes to fill in the gaps created by the script’s willingness to change tack at the slightest provocation. It looks tacky, and the visual design of the movie serves only to reinforce the idea that there was very little money available to get it made. As mentioned above, this is an appallingly assembled movie that becomes more and more depressing to watch the longer it goes on. If this really is the best sequel to Death Race 2000 that Roger Corman could come up with, then perhaps it would have been better to have left well alone and made something more distinctive or singular. As it is, we have this instead, a terrible farrago of a movie that is hard to defend both artistically and commercially.

Rating: 2/10 – a leaden, dreadful, uninspired movie that aims so low that it’s hard to work out what its aims actually are (aside from ripping off The Hunger Games as often as it can), Death Race 2050 is an insult to its predecessor, and easily qualifies as one of the very worst movies of 2017; low budget doesn’t have to mean poor quality, but this is one movie where any care or attention due to the project seems to have been jettisoned on day one as being completely unnecessary.