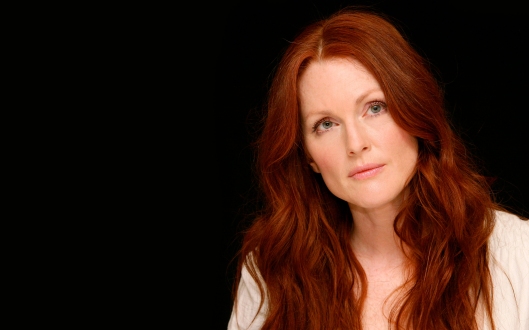 The Oscar-winning actress has the kind of career that few can ever dream of, but she’s known mostly for her dramatic roles in movies such as Savage Grace (2007), Short Cuts (1993), Boogie Nights (1997) and Still Alice (2014). But ever since her first big screen appearance in Tales from the Darkside: The Movie (1990), she’s flitted from genre to genre and made lasting, indelible impressions in all of them – even in something like Next (2007). Here are five movies you may have forgotten she was in, and which serve as evidence that she can do a wide range of movies and genres and not just drama. 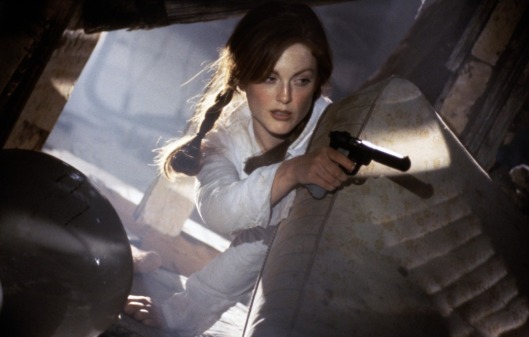 As the target for both Sylvester Stallone and Antonio Banderas’ titular assassins, Moore plays a nervy computer hacker who (somewhat inevitably) earns Stallone’s trust and protection. In real terms it’s a supporting role, but Moore’s presence is welcome amidst all the testosterone flying around, and she invests the character with a will to survive that plays well against Stallone’s taciturn hitman. 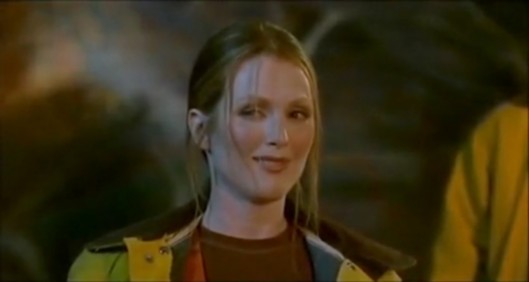 Moore does comedy in this sci-fi extravaganza, as the clumsiest CDC scientist you’re ever likely to see, and matching old hands David Duchovny and Orlando Jones for laughs. It’s nice to see her doing something lightweight and angst-free, and she seems to be enjoying herself at the same time, displaying a flair for comedy that hasn’t been exploited nearly enough over the years. 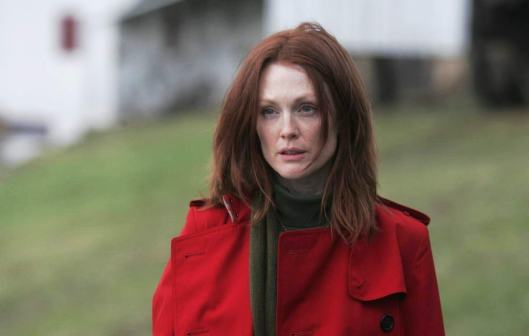 This horror mystery gave Moore a chance to do scary as the forensic psychiatrist who learns that the multiple personalities displayed by one of her patients (played by Jonathan Rhys Meyers) are all murder victims. It’s not the best movie in her resumé, but Moore is as compelling as always and makes her character’s crusade for the truth more understandable and credible than in most movies of this type. 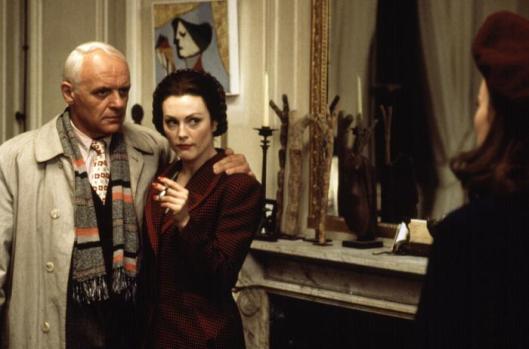 In this biopic of the famous artist (played by Anthony Hopkins), Moore gets to appear in a Merchant-Ivory production, and play one of Picasso’s muses, the photographer Dora Maar. Moore is excellent as one of the many women Picasso mistreated during his life, and while this is definitely a dramatic role, here Moore rises to the challenge of playing a real person, and steals the movie. 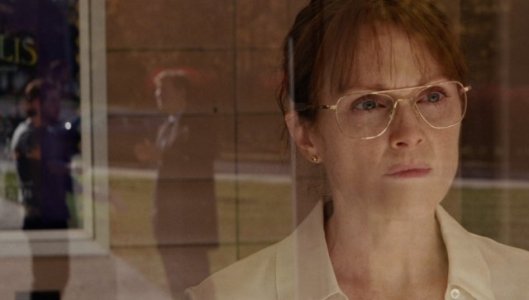 As the character of the title, Moore mixes comedy and drama to disarming effect as a teacher who discovers she’s obsessed by a former student (played by Michael Angarano) who returns to their respective hometown after writing an unsuccessful play in New York. Linda’s determination to put on his play leads her to take risk after risk where she’s never done so before, and Moore makes her obsessive/compulsive behaviour both sweet and disturbing at the same time. 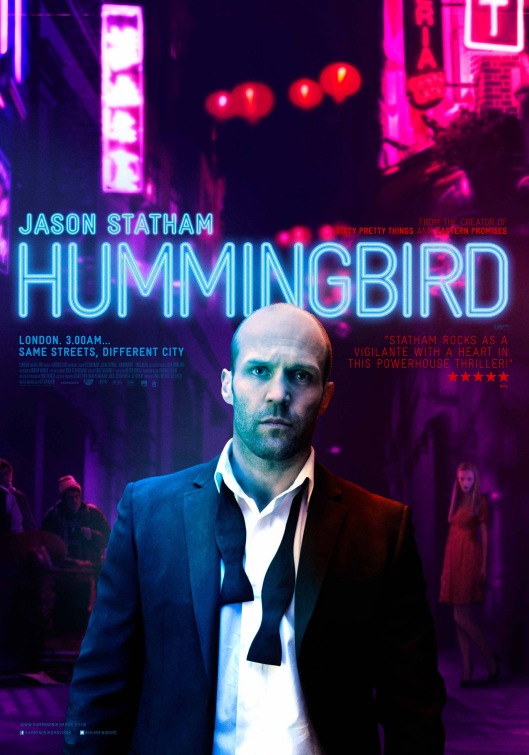 There are times when watching a Jason Statham movie is akin to watching an old friend do their favourite party trick: they may execute the trick with all their usual finesse (or lack of it), and they may add or refine it as they feel necessary. But when all’s said and done, it’s still the same old trick. The same is true of Hummingbird, a London-based drama that does its best to show that Statham has a broader range than we might think, but then still gets him to thump various co-stars and stuntmen.

Statham plays Joey, on the run from a military court martial and living rough on the streets of London. When we first meet him he’s sheltering in a cardboard box with a woman called Isabel (Bewick). They’re separated after an encounter with a local criminal enforcer called Taxman (Morris) and his henchman; Joey has tried to resist and been beaten for his efforts. He manages to get away over the rooftops and eventually finds his way into a flat where he discovers the owner is away until October (it’s now February). He cleans himself up, helps himself to the owner’s clothes and finds a new credit card amongst the mail piled up by the front door (as well as an envelope conveniently stamped Pin Enclosed).

Joey has become a drunk since going AWOL and despite his new-found good fortune he returns to the bottle. While drunk he goes to a shelter run by the Church and gives £500 to Sister Christina (Buzek); in the past he has relied on the food provided by the shelter and wants to give something back in return. Joey also asks her to find out what’s happened to Isobel. 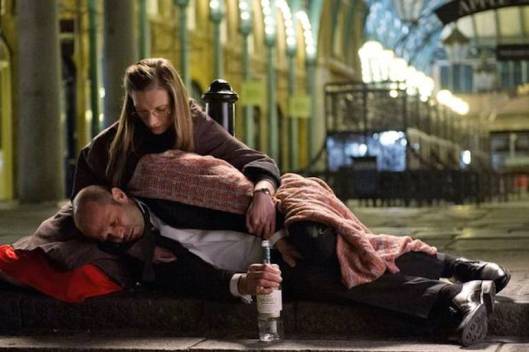 Now at this point, one of two things could have happened: one, Joey spirals ever further into alcoholism before finding redemption through a selfless act, or two, Joey turns his life around and does things of true value before facing up to his past. But writer/director Knight comes up with a third option: Joey turns his life around and joins a Chinese crime syndicate. It’s an amazing choice and his motivation for doing so remains murky throughout. It allows for the requisite punch-ups that Statham is renowned for, but offers little in the way of real character development. His relationship with Sister Christina becomes more involved, almost romantic, but it’s her motivation that remains murky, and so the movie stumbles from scene to scene with no clear purpose or, ultimately, resolution.

Statham is an actor for whom expressing real emotion is always going to be a stretch, and he’s fashioned his career accordingly as the stoic loner who’s stony expression acts as much as a warning to others as a mask for his feelings. And while Hummingbird might be viewed as an attempt to show he has more skill as an actor than expected, the material doesn’t allow him to do so. He’s still the taciturn outsider, resorting to violence when necessary and doling out clipped lines of dialogue. There may be an emotional role out there that Statham would be entirely suited to, but this isn’t it.

As for the rest of the cast, Buzek offers a conflicted Sister Christina who becomes dangerously close to Joey and finds herself in turmoil because of it, while other characters come and go without making much of an impact. The exception is Max Forrester (Brassington), a particularly nasty punter who abuses prostitutes and finds himself the target of Joey’s somewhat confused sense of morality. Otherwise, this is a movie that concentrates on its two main characters.

The London locations are used to good effect – it’s always strange to see places like Shaftesbury Avenue largely deserted, whatever the time of day – and the production design by Michael Carlin is suitably grimy and depressing. Knight proves to be a capable director but sadly his own script lets him down; it’s an uneasy mix of unlikely romance, grim docudrama, social criticism, action movie and crime drama, and not all of the elements gel. There’s also a problem with the pacing, with some stretches slowing the movie unnecessarily.

Rating: 6/10 – not all bad but a disappointment nevertheless; Knight needs to tighten any further film scripts he writes, and Statham – if he wants to – should commit to a script that really stretches him as an actor.