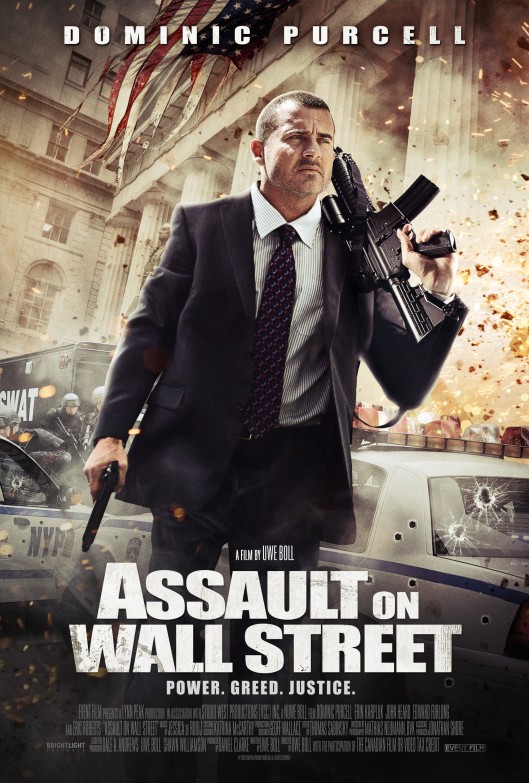 Security guard Jim Baxford (Purcell) and his wife Rosie (Karpluk) are faced with mounting debts when Rosie’s post-cancer treatment proves to be too expensive. Soon their medical insurance is capped, the savings they had invested are wiped out by fraudulent banking practices engineered by Jeremy Stancroft (Heard), they max out their credit card, the bank refuses to extend them any further credit then informs them they’ll be foreclosing on their property, and to top it all off, Jim loses his job. Can things get any worse? Well, yes they can, but then it’s up to Jim to fight back and redress the balance.

Set against the backdrop of the recent financial meltdown in America, Assault on Wall Street takes a simple tale of financial woes pushing a good man into doing (very) bad things, and turns it into something turgid and forgettable. Baxford’s response is to become judge, jury and executioner of every bigwig investment banker he can train his ‘scope on. There’s a long, slow build-up to all that, though – around seventy minutes – and as setback after setback is piled on poor Jim’s back, you’re supposed to feel so sorry for him and his plight that the extreme course of action he embarks upon seems entirely reasonable; forgivable even.

But when all’s said and done, this is an old-style vigilante movie. Purcell makes for a cut-rate Charles Bronson, but at least has a better range of facial expressions (though check how he looks at a funeral: his eyes are so red and wet he looks like he’s been Maced). The main difference here is that Bronson’s Paul Kelso famously “took out the trash” while Purcell’s Jim Baxford merely goes on a killing spree. Like most vigilante movies there’s an unsurprising lack of moral depth on display, and what little there is is trampled underfoot by the banalities of Boll’s own script. At the film’s end, a voice over proclaims, “I promise I will keep killing” – nothing having been settled at all, other than the movie’s own requirement for some good old fashioned biblical-style bloodletting.

This being an Uwe Boll movie you can expect the usual disjointed montage sequences, a simplistic script peppered by implausible dialogue, the camera being in the wrong place at the wrong time so that even the simplest of scenes are visually confusing, performances that range from underwhelming to apparently improvised, and well-known character actors such as David and Paré (who should know better by now – Assault on Wall Street is his 11th movie under Boll’s direction) turning up to pay the mortgage without looking too embarrassed. In short, Assault on Wall Street is a very bad movie, and while Boll has made worse movies in his time (check out Bloodrayne: The Third Reich if you don’t believe me), this is a very slightly better movie than he usually makes. But don’t let anyone else tell you it’s a great deal better because it’s not: it’s leaden, unconvincing and slipshod.

That said there are some positives: Mathias Neumann’s photography is crisp and well-lit, and Jim’s firearm rampage is effectively choreographed, while Karpluk does a good job with her woefully underwritten role. Otherwise, this is one movie to avoid.

Rating: 3/10 – the sluggish pace and haphazard direction stifle any chance Assault on Wall Street had of being even remotely interesting. To all producers out there, a word of warning: if Uwe Boll wants you to finance his next picture, make sure he hasn’t written it as well.