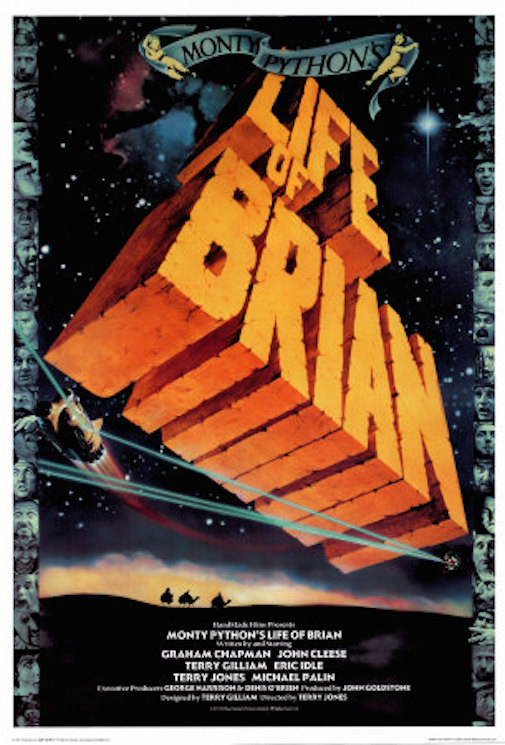 I was going to write just four words to describe how I feel about Monty Python’s Life of Brian: The.  Funniest.  Film.  Ever.  (And then have it in Latin*.)

Although I do subscribe to that opinion – and suspect I always will – even that bold assertion doesn’t do justice to a movie that makes me laugh out loud every time I see it, and which is the one movie that I can quote whole chunks from.  To me it is the perfect distillation of what Monty Python could do when they were firing on all cylinders: witty, iconic, bombastic, satirical, acerbic, perceptive, dry, ironic, crazy, and just plain daft.

Like a lot of people in the UK, I saw Life of Brian when it first came out in cinemas.  Or, at least, in the cinemas that were allowed to show it.  Thirty-nine local authorities (councils) either banned the movie outright, or gave it an X certificate (meaning for over 18’s only), thereby denying the movie to part of its target audience, the over 14’s.  Luckily, my local council wasn’t as draconian in its outlook as some others, and on the first Saturday after the movie was released, two friends and I trekked to our local fleapit to see this cause célèbre.

I was already a fan of Monty Python and had enjoyed their TV outings, as well as Monty Python and the Holy Grail (although I found that movie a little too rough around the edges).  I knew the Pythons could be silly and in Life of Brian there were moments of inspired silliness, but this seemed altogether more grown up, more considered, as if the team had decided to infuse their unique brand of comedy with an added depth.  The satirical elements were brilliantly done, highlighting the hypocrisy and shallow-mindedness of religious followers, as well as adopting an heretical stance regarding the Church.  The political aspects were deftly handled, poking fun at revolutionary groups (“The Judean People’s Front!  Splitters!”) and skewering the pomposity of left-wing political idealists (any scene where Reg and the People’s Front of Judea endlessly debate how to move forward).  All these elements were fresh as well, giving the movie an edge of originality that added to the movie’s overall effect.

Of course, Life of Brian isn’t just about the script or the historical detail or the amazing visual look of the movie.  It’s about the characters, the larger than life caricatures and personas we’ve come to know and love: Brian (Chapman), the plucky everyman mistaken for the Messiah but in reality as rattled as anyone would be when confronted by a worshipping crowd; Mandy (Jones), Brian’s mother, a coarse, dentally-challenged harridan with loose morals (“You mean you were raped?” “Well, at first.”); Pilate (Palin), the slightly effeminate Roman leader with little sense of how ridiculed he is; Reg (Cleese), the contemptuous, shop steward-like leader of the People’s Front of Judea, and the first to hide when the Romans (or Brian) come knocking; Stan (Idle), who wants to be called Loretta and who wants to have the right to have babies (“Babies? You can’t have babies! Where’s the foetus gonna gestate? You gonna keep it in a box?”); and the Gaoler’s assistant (Gilliam) who knowingly looks at Brian and tells him, “I know where you can get it if you want it”.  All played to perfection, and firing off lines of dialogue with superb timing.

Since that initial screening, and as with 2001: A Space Odyssey, I have endeavoured to watch Life of Brian at least once a year since its debut on home video.  Up until a few years ago, myself and the friend I took to the IMAX five times last year, would put together 36-hour movie marathons; Life of Brian was always the closing movie (and the one we never slept through any part of, no matter how tired we were).  As with the other movies in my Top 10, it’s a movie I can watch over and over and still find something new in it each time, even though it’s the shortest.  It can cheer me up if I’m down, it can make me smile just by thinking about it – I’ve been smiling the whole time I’ve been writing this – and thirty-five years on it is still as impressive and hilarious as ever.