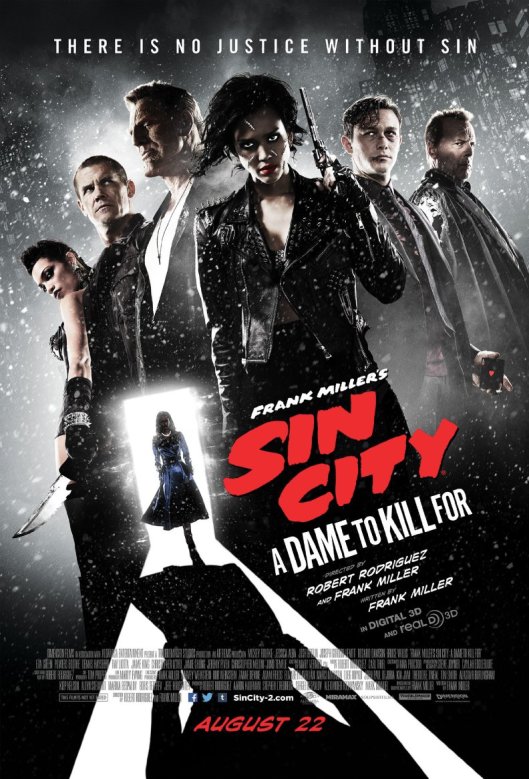 Basin City, night.  Marv (Rourke) is having trouble remembering what’s happened to him as he surveys the wreckage of two cars and the bodies of two young men lying in the road.  As the night’s events become clearer, he remembers an encounter with four young men, and being shot by one of them.  Heading for the Projects, two of the young men attempt to ambush Marv but they’re stopped by unseen assailants.  Marv kills them both and chases the other two down, bringing his memory full circle.

At Kadie’s Bar, a poker game in a back room is presided over by Senator Roark (Boothe).  Johnny (Gordon-Levitt), a drifter, invites himself into the game and wins big, earning the enmity of the Senator.  Later, Johnny has the fingers of his lucky hand broken by the Senator, and is shot in the leg as well.  Johnny swears revenge but Roark is dismissive of the threat, believing himself invincible because of the power he wields.

Elsewhere in Basin City, private eye Dwight (Brolin) receives a phone call from someone he’d hoped he’d never hear from again, old flame Ava (Green).  They meet, and she reveals she is in an abusive marriage, and is fearful for her life.  When she’s forced to leave by Manute (Haysbert), who works for her husband, Dwight decides to find out more.  He goes to Ava’s home but is caught by Manute and viciously beaten up.  Back at his apartment, Dwight receives another visit from Ava and they have sex, but again Manute arrives and takes her away.  Enlisting Marv’s help, Dwight returns to Ava’s home, where he kills her husband, Damien (Csokas), but soon realises he’s been set up by Ava who shoots him.  Marv (who’s blinded Manute in a vicious fight between the two) rescues Dwight and they get away to Old Town.  Helped by old friend Gail (Dawson), Dwight recovers and enlists her help in seeking revenge on Ava.  They return to Ava’s home to settle matters once and for all.

Johnny finds a doctor (Lloyd) to help him with his injuries and he returns to the poker game where once again he beats Roark.  His victory is short-lived as Roark turns the tables on him once more.  While Roark reclaims his standing, Nancy (Alba), a stripper at Kadie’s, plots to kill him in revenge for the death of Hartigan (Willis), a cop she cared about.  But Nancy drinks too much and hasn’t the courage to act on her anger.  In a fit of rage, she disfigures herself, which leads Marv to offer his help.  Together they make their way to Roark’s estate, where Nancy comes face to face with the Senator. 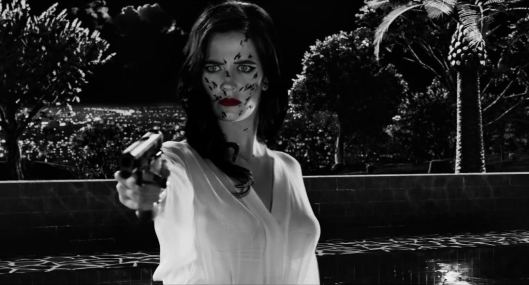 Arriving nine years after its predecessor, Sin City: A Dame to Kill For retains many of the earlier movie’s characters, the same visual approach, hard-boiled dialogue and non-linear storytelling, and extreme bouts of violence.  As a companion piece, the movie works well, but there’s something missing from the experience: anything new.

The first movie worked precisely because it was new.  The mixture of live action and CGI, allied to heavily stylised violence and Frank Miller’s nihilistic characters, was, in its own way, a refreshing change from other violent dramas (and thankfully proved hard to duplicate).  The problem here is that Miller and Rodriguez have stuck too closely to the original formula, leaving Sin City: A Dame to Kill For looking and feeling like a greatest hits version of the first movie, rather than a bona fide sequel.  It’s disquieting to realise as you watch the movie that everything’s the same, and with that realisation it also becomes clear that this outing is going to lack the verve and complexity of Miller and Rodriguez’s first collaboration.  The tone is the same and there’s no variation.

Worse still is the lack of investment in certain characters, notably Johnny who we don’t really care about, despite his opposition to Senator Roark, and Nancy, whose bitter reluctance to act against the Senator seems forced rather than natural.  Twice she has him in her sights while performing a routine, and both times she fails to pull the trigger.  Credible?  No; and nor is Marv appearing in each storyline, and helping out in the same fashion on two separate occasions (it’s also problematical that he died in the first movie – why is he in this one?)  Hartigan returns as a ghost but makes almost no impact on Nancy’s story, while Gail and her team of female assassins are treated like bystanders.

Even the cast can’t raise this one from its slumbers, though Green makes the biggest impression, making Ava one of the most deceitful and alluring femme fatales to be seen for some time (she’s naked quite a lot as well, and shot in a fetishistic fashion that is reserved only for her).  Brolin subs for Clive Owen, and Boothe steps out from behind Rutger Hauer to play the movie’s main villain with aggressive panache.

Ultimately, the stories aren’t strong enough, or interesting enough, to resonate beyond a first viewing, and by the end, even the violence has lost its charm, becoming repetitive and – sadly – unexciting.  What’s left is an uneven mix that doesn’t know how to straighten itself out or make itself more coherent.

Rating: 5/10 – below par in pretty much every department with just enough being done to make the movie look better than it actually is, Sin City: A Dame to Kill For is a sequel that tries hard to recreate the magic of its forerunner, but never really succeeds; if a further entry is planned, Messrs Miller and Rodriguez will need to spend more time at the drawing board before committing anything to film.