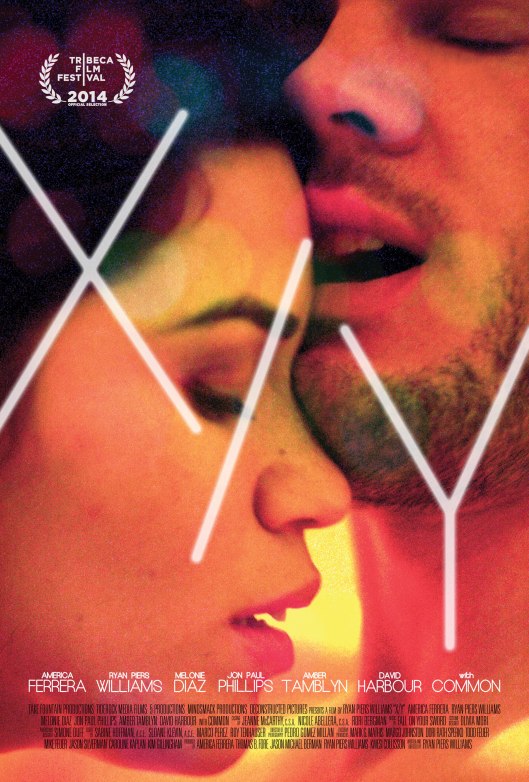 Mark (Williams) and Silvia (Ferrera) are unhappy with their relationship, with both of them feeling unappreciated, and with both of them failing to communicate with each other. These issues come to a head when Silvia reveals she’s slept with someone else called Jason (Common). Mark takes some of his stuff and moves in with his friend Jake (Phillips). While he tries to work out what to do next, he also tries to get a movie script he’s written off the ground via his agent, Todd (Harbour).

Elsewhere that morning, one of Silvia’s friends, Jen (Diaz) is waking up in the bed of a stranger she met the night before. She leaves before he wakes up, but leaves a bag behind so she has an excuse to see him again. At a coffee shop she leaves her number for the guy behind the counter, Phil (Deferrer). She meets Silvia and they talk about Mark leaving, but when Jen tells Silvia she “fucked up”, Silvia gets defensive and deliberately upsets Jen to the point where Jen tells her to go. Later, Jen goes back to retrieve her bag only to find the man she met is married.

Mark’s friend, Jake, meanwhile, is trying his best to get over the break up of a five year relationship. He has meaningless sex with a woman in the club where he DJ’s, but can’t connect with a woman, Claudia (Hemingway), he meets at a photo shoot and who is clearly attracted to him. He spies on his ex-girlfriend and uses his emotions to fuel the artwork he paints. Silvia’s separation from Mark means more time to have sex with Jason but her work begins to suffer as a result, and she begins to realise that she and Mark splitting up hasn’t been for the best after all.

While not pushing any boundaries at all in its depiction of the lives of four fairly messed up individuals, X/Y does have an honest approach to the material that helps carry it through some of the more dull and unsurprising stretches. It’s another movie that reminds us that people in relationships are notoriously bad at talking to each other, and that they only really confess their feelings to their friends: Mark and Silvia tell Jake and Jen respectively how they feel about each other, but somehow find it too difficult when in the same room together.

While this is standard operating procedure for most romantic dramas, the problem with this type of movie is how much depth the characters’ problems have. Here, Mark and Silvia have been together for six years but seem to have reached a point where they’re making each other unhappy but without understanding why. Unfortunately, over the course of the movie, the audience doesn’t find out either. Mark admits at one point that he doesn’t always know what he wants, and there are times when the multi-character set up means the movie doesn’t either. While Mark and Silvia’s relationship takes up most of the narrative, the time spent with Jen and Jake offers the viewer nothing more than two people who are struggling not to connect. Both characters are adrift, grabbing illusory notions of love and emotional attachment where none is present. Jen’s sadness at being alone prompts her to binge shop despite being unemployed; Jake moves from one pursuit to another in an attempt to outrun his sadness at being alone. But Mark and Silvia have each other, even though they’re apart, and while Jen and Jake’s problems add some range to the material, they’re vignettes that don’t add any depth to the basic storyline.

With Mark and Silvia’s troubles bookending the movie, and its centre proving something of a distraction, it’s left to the performances to rescue things. Real-life couple Ferrera and Williams are entirely credible as a couple too entrenched in their own differences to see how unimportant they are. Ferrera brings a rawness to her scenes with Williams that makes Silvia more sympathetic than she appears, her judgmental attitude giving way as the movie progresses to a more ambivalent awareness of how she’s behaved, and finally to a better understanding. As Mark, Williams brings less to the table, but that’s more to do with the way the character is written: he’s the typical male who thinks everything is okay until he finds out it isn’t… and then he’s completely bewildered. Williams does a good job in getting that across while making Mark’s initial need to keep his distance entirely understandable; he wants his relationship to work but not at the expense of his pride.

As Jen and Jake, Diaz and Phillips acquit themselves equally well, with Diaz proving again why she’s one of the most intuitive actresses working today. As the seemingly vapid (but clued up) Jen she almost steals the movie in terms of performance. When she confronts her one night stand and his wife, it’s a small masterpiece of injured pride and smiling revenge, and the movie benefits from her involvement (and seems somehow less of a piece after her segment is over). Phillips has the most challenging role, keeping Jake’s deep-rooted insecurities and emotional instability from becoming too much for the audience to believe in, but he juggles the various dilemmas Jake has to face with equanimity and quiet inspiration.

All told, X/Y is a valiant effort but somehow it doesn’t quite hit the mark, leaving the viewer with the sense that, not only has this been done before, but it’s probably been done in a better fashion and with more to say. Williams directs with an acceptable, if unremarkable, visual style that improves when he uses close ups to highlight the emotional tension in a scene, and he often lingers on characters’ faces to good effect, their feelings allowed full expression without any chance of doubtful interpretation. The soundtrack features a selection of indie songs that come and go without making much of an impression, and while this isn’t unusual – so many soundtracks nowadays seem like a contractual obligation than a benefit to the movie they’re in – they do distract from the overall feel that Williams is aiming for.

Rating: 5/10 – feeling like a collection of short films stitched together, X/Y lacks the drive and energy needed to make its audience care about its characters and their problems; not without its good moments, but lacking in necessary detail, the movie isn’t as compelling as it needs to be.