Set against the backdrop of the Edinburgh Festival Fringe (and shot there in 2004), Festival is a compendium of interlocking stories centred around various actors and comedians who are all trying to be noticed or win awards. Amongst the comedians there’s Tommy O’Dwyer (O’Dowd), returning for his ninth year of unqualified non-success; Conor Kelly (Carter), who works with puppets; and Nicky Romanowski (Punch), who tells comic stories based on her Jewish upbringing. Amongst the actors there’s Faith Myers (Marshal), a first-timer with a one-woman play about Dorothy Wordsworth; a Canadian trio that includes Rick (Lotan), who finds himself attracted to the owner of the house they’re renting, Micheline (Bullmore); and Father Mike (Russell), whose play about paedophile priests may not be entirely fictional. Orbiting these characters are the likes of über-famous comedian and Comedy Award judge Sean Sullivan (Mangan), and his put-upon PA Petra Loewenberg (Cassidy); radio presenter Joan Gerard (Nardini), who’s also a Comedy Award judge; and Arnold Weiss (Milligan), an American agent looking to represent Sean in the US.

Ensemble movies can be a tricky proposition. Give too much screen time to one character and their story and you risk making another character’s story slight and uninteresting. Reverse that idea and you don’t do justice to the other character and their story. With fifteen main characters to juggle with, Festival does a good job of getting the balance right, but of necessity it does focus on some characters more than others, though not to the extent that any one tale suffers accordingly. However, whether or not you care about any of the characters is another matter, because while Annie Griffin’s feature debut doesn’t short change any of them in terms of development, even the most sympathetic of characters – Petra, for example – fail to connect with the audience. You can perhaps understand the dilemma: whether to show the hypocrisy and rampant self-absorption of the performers at the Fringe, or to make them less objectionable – and the movie less credible as a result. But the consequence of opting to show the hypocrisy etc. means that the result is a movie where being immersed in the various storylines isn’t as rewarding as it could be. 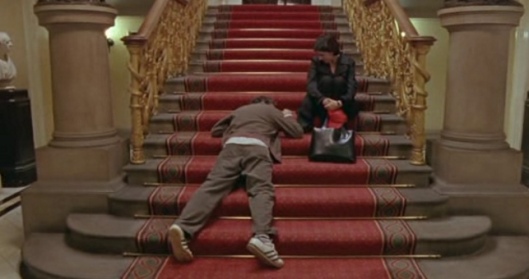 Part of the problem is in the movie’s fluctuating tone. In trying to accommodate both comedy and drama, while also including flashes of bathos and heavy-handed irony, Griffin provides too many awkward transitions from one to the other (and sometimes in the same scene). It’s also a less than subtle movie, with one sex scene in particular guaranteed to have some viewers squirming with discomfort (though not as much as one of the characters involved in it), and Griffin making the point over and over that comedians are an unhappy bunch whose ability to be funny masks a myriad of personal and emotional problems. Thankfully, trite observations such as these are offset by the quality of the comedy elements, which are very funny indeed. The drama though, still retains an overcooked feel to it that stops it from being entirely credible, and it’s in these moments that you can see Griffin trying too hard. As for the performances, there isn’t one portrayal that stands out from all the rest – though Mangan’s obnoxious Sean Sullivan comes close – which makes this a truly ensemble experience. The hustle and bustle of the Edinburgh Festival is expressed through often guerrilla-style cinematography courtesy of DoP Danny Cohen, and allows for an authentic backdrop. It’s just a shame that not everything happening in the foreground matches the industry of the festival itself.

Rating: 6/10 – promoted as a “black comedy”, Festival is more of an unfulfilled dramedy, one that succeeds more in one area than it does in the other; it’s entertaining enough while you’re watching it, but the relevance and resonance it’s aiming for doesn’t come across, making this frustrating and satisfying in almost equal measure.