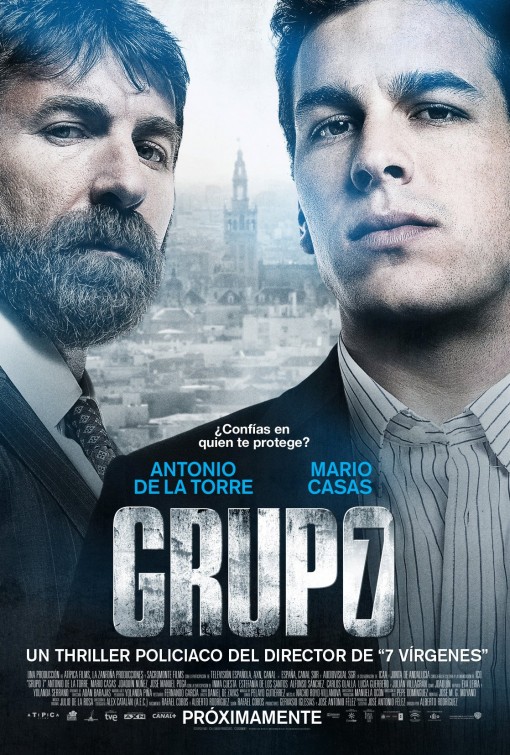 Seville, 1987. With five years to go before the city plays host to the 1992 World Expo, the authorities are determined to root out any and all crime in the city, and particularly the drugs trade. Spearheading this attempt is Unit 7, made up of four officers: tough, uncompromising Rafael (de la Torre), young, ambitious Ángel (Casas), jovial, emotional Mateo (Núñez), and vain, homophobic Miguel (Poga). Using informants such as Joaquín (Villagrán) the team begins dismantling the various dealers and suppliers that threaten the Expo’s success. But their initial busts don’t amount to very much. It’s only when they find a substantial amount of heroin at the apartment of a prostitute known as Mahogany (de los Santos), Ángel takes some of it, and the team agrees to use it to create more informants, and thereby catch more dealers and suppliers.

Over the next four years their plan comes to fruition, and to such an extent that the team are responsible for fifty per cent of all arrests made by the Seville police. But tensions arise within the group as Rafael, nominally the group’s leader, is challenged more and more by an increasingly erratic and unpredictable Ángel. Ángel becomes more and more intolerant of the drug dealers and the junkies, and often violently assaults them in the way that Rafael used to. But where Ángel becomes more inured to the violence, and emotionally closed off – and which affects his marriage to Elena (Cuesta) – Rafael becomes more relaxed and indifferent, due to his relationship with a young junkie, Lucía (Guerrero).

The team’s high arrest rate also begins to attract the attention of Internal Affairs, and the team find themselves being followed. With an increasing media spotlight on them as well, a misguided raid on a home in the suburbs causes them to lose some of their credibility (and sense of invincibility). And when Ángel becomes the target of someone who knows why the team are so successful, and is prepared to use terror tactics to undermine them, their efficiency continues to falter. When they’re ambushed and humiliated in a similar fashion that they used to intimidate some junkies once before, and the identity of their tormentor is revealed, it leads to Ángel and Rafael going back to deal with their tormentor once and for all.

Incorporating contemporary footage of the World Expo site being developed and built over the years between 1987 and 1992, Unit 7 provides a social, political and historical perspective to its story that adds some degree of depth to the material, and while this is to be applauded, the episodic nature of the story ultimately works against it, leaving the viewer wanting to know more about the characters and their motivations, and with the feeling that there’s a lot more going on behind the scenes than we ever get to see or know about.

The trickiest (and not entirely convincing) aspect of all is the character of Ángel, set up as the rookie of the group and suitably naïve when the movie begins. An unfortunate encounter with a drug dealer leaves his lack of experience exposed, and his attempts to gain promotion are hampered by his diabetes – a plot device which is used in such a haphazard manner it might as well not be mentioned. But from the moment he picks up the pack of heroin and hides it he becomes a different man: arrogant for the most part and acting more like a vigilante than a cop. It’s a swift, unexpected change in direction, and while it helps set up the rest of the movie, appears too much out of the blue for comfort.

In contrast, Rafael’s turn to the “softer” side is given more room to develop, and while his relationship with Lucía provides more of an emotional component for the movie than it has anywhere else, the whole thing ultimately doesn’t go anywhere and leaves Rafael just as embittered and alone as he was at the beginning. With Mateo equalling comedy relief and Miguel placed firmly in the background, screenwriter Rafael Cobos’ more random approach to characterisation has the effect of distancing the viewer from the team, even though strong efforts are made to show their camaraderie and their combined sense of purpose. Certainly the cast, all well chosen for their roles, put in strong, confident portrayals – with de la Torre and de los Santos proving especially convincing – and make more of their roles than the script allows for.

Thankfully, Cobos’ script does work extremely well in its attempts to portray the effort made to break up various drugs rings and the kind of intimidation and violence that goes with it. The team regularly use excessive force, and while it’s probably not a misrepresentation of the times or the police attitude towards criminals, the savagery of their actions is remarkably one-sided – even when their tormentor reveals himself he doesn’t treat them as harshly as he was by them. This difference again has the effect of distancing the viewer from the group, and their subsequent actions, plus their ultimate fate come 1992, lacks the resonance it should have had.

That said, the action scenes are well-mounted, and Rodríguez shows a flair for unusual camera angles that makes – in particular – the opening rooftop chase such a visceral and propulsive experience to watch. With so many movies like this being made across the world (and too many in the US), Rodríguez’ visual acuity helps lift the movie above many of its competitors, and while this is his first attempt at making a película policial, bodes well enough if he should decide to make another. Aided by regular collaborators DoP Alex Catalán and composer Julio de la Rosa, Rodríguez has fashioned a hard-hitting, if emotionally distant crime drama that, fortunately, scores more often than it misses.

Rating: 7/10 – though struggling to offer a connection for the viewer on an emotional level, Unit 7 does provide a solid, impactful ride for most of its running time; with a firm sense of place and time, and an often impressive look and feel to it, this movie is still worth tracking down.