A female-only boarding school. A new pupil still mourning her recently deceased mother. Two roommates who seem especially close. An atmosphere of prejudice and privilege. The attentions of a teenage boy from another, nearby school. Peer pressure. Love rejected and dismissed. An injured falcon. High emotions left unchecked and leading to tragedy. All these and more form the meat of Lost and Delirious, a movie that comes very close to capturing the urgency and intensity of first love, and the spiralling madness that follows in the wake of that first love being rejected out of self-preservation.

The movie opens with the arrival of fourteen year old Mary (Barton) at a semi-remote all-girls boarding school somewhere in Ontario, Canada. She’s shy and hesitant, so obviously a naïf that she might as well have it written across her forehead. Fortunately, the headmistress, Miss Vaughn (Burroughs), places her with Paulie (Perabo) and Tori (Paré), two older girls who take her under their combined protection and help her adjust to being away from home. It isn’t long though before Paulie and Tori’s relationship becomes much clearer: they’re lovers, but only Mary knows.

Of the two, Paulie is the more rebellious, challenging authority at (almost) every turn, and behaving with a reckless abandon. Tori is more studious, less willing to antagonise the teachers in the way that Paulie does, and their differences seem to have brought them closer together. As time goes by they drop any pretence around Mary that they’re not a couple, and she becomes a confidant to their affair. But as with all breathless (and secret) love affairs in such an environment, exposure isn’t too far away, and one morning Tori’s younger sister, Allison (VanCamp), with some of her friends burst into their room and find Tori and Paulie naked in Tori’s bed.

It proves a turning point for their relationship. Tori is unwilling to admit her feelings, or that she and Paulie are more than friends, and she tells her sister very forcefully that she isn’t a lesbian, and that she didn’t even know Paulie had got into her bed with her the night before. Allison accepts Tori’s explanation and agrees not to mention it to anyone, and especially their father who Tori knows is staunchly homophobic. Her withdrawal from Paulie though has the effect of driving Paulie to ever more extreme actions, including declaring her love for Tori in front of the other students. Embarrassed and afraid of being disowned by her family, Tori maintains her rejection of Paulie, and ever more desperate to win her back, the increasingly disturbed Paulie resorts to her most extreme actions yet.

Fans of all-girl boarding school stories will no doubt be expecting some melo- to go with their drama, and while Lost and Delirious certainly has its moments it’s a much better example of the genre that starts off quietly, taking care to establish its trio of leading characters and affording time to provide a (mostly) convincing backdrop for the action that unfolds. Adapted by Judith Thompson from the novel by Susan Swan, the movie’s isolated locale and sense of modulated behaviours is given potent expression through Mary’s initial feelings of abandonment by her newly remarried father. Seeing her wide-eyed dismay at the enormity of both the school and the task of fitting in that lies ahead of her, Mary’s story is likely to be the movie’s focus, the classic tale of the young girl who seeks acceptance but is rebuffed at every turn. But instead Mary is the young girl who finds herself caught up in someone else’s story, and learns a heartfelt lesson because of it.

By subverting our expectations in this way, the movie shows it’s not afraid to take risks, even if those risks incur some narrative wobbles later on. As Paulie and Tori’s relationship becomes the movie’s true focus, and Mary becomes their “accomplice”, the screenplay becomes playful and carefree, celebrating the girls’ love for each other, and paying no heed to any possible downfall that may be around the corner. It’s during this period that Lost and Delirious is at its most tolerant, placing Paulie and Tori in a perfect bubble of acceptance and indulging itself in their happiness. But from the moment that Allison bursts into their room and shatters that perfect bubble of acceptance, there’s nowhere else their relationship can go but downhill, and with terrible consequences. 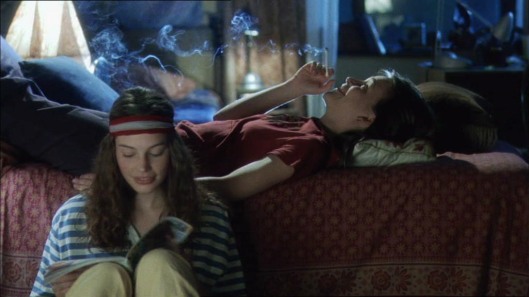 But again, the movie wrong foots the viewer. Instead of Paulie and Tori finding sufficient strength from their relationship to allow them to overcome any prejudice or homophobic resentment towards them, Tori folds under the pressure of family ties and the loss of the life she’s used to. On the surface it seems a cowardly, awful thing to do, to deny your love for someone, but Tori is a product of her privileged background and she has no more choice in the matter than Paulie does in how she reacts. Torn by her sense of duty to her father and her feelings for Paulie, it’s the insidious nature of a “traditional” upbringing that is the villain, and Tori doesn’t have the strength to fight against it.

So it’s left to Paulie to fight against the injustice of losing the one person she loves with all her being. But she’s a tragic figure with a tragic future waiting just ahead for her. The script does nothing to allay our fears on this matter, letting Paulie’s unhappiness shred any remaining inhibitions or emotional restraints until the only outcome that’s possible is one that will have repercussions for all that witness it. As this event draws ever closer, and Paulie’s actions become ever more desperate, it becomes all the more awful to see her floundering in her search for a way to ease the pain she’s feeling. 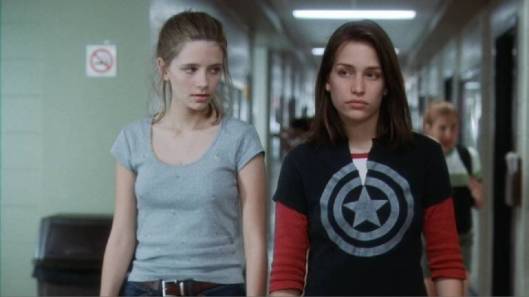 As Paulie, Perabo is excellent, putting in the kind of performance that is both affecting and heart-rending at the same time. This came after Coyote Ugly (2000), and while that movie brought Perabo to everyone’s attention, this is the movie that should have cemented her reputation. As it is, it’s possibly her very finest role, one that’s tinged with melancholy, vulnerability, despair, longing, fearlessness, and above all, the joy that only true love can bring. It’s a fierce, impassioned performance, poignant and sincere, and the movie exploits it at every opportunity. Paré is somewhat sidelined by Tori’s self-imposed split from Paulie, but she does a good job in showing the pain Tori herself feels at giving up her own true love. She’s also asked to deny her love for Paulie once or twice too often for narrative comfort, which some viewers may find distracting as well as repetitive. But like Perabo, Paré is equally good at displaying the elation of first love, and their early scenes together are full of the exuberance that comes with loving unconditionally.

Tying all this together neatly and with a studied panache, Pool illustrates the various pressures and required conformities of single sex school life with a greater attention to detail than is at first apparent (this is definitely a movie that delivers more from a second viewing). She focuses on the girls’ emotions to very good effect, and shows a confident grasp of the sexual politics inherent in such an environment, while also displaying a keen eye (and ear) for the other exigencies that come with it. If she has slightly more trouble explaining how Paulie can be consistently rude to Miss Vaughn and her teachers, or that her increasingly disturbed behaviour can go equally unchallenged, then it’s a small price to pay for the quality achieved elsewhere.

Rating: 8/10 – a modest coming-of-age drama that succeeds in elevating itself by virtue of a superb central performance and careful attention to detail, Lost and Delirious is deserving of being “rediscovered” by a wider audience; with an emotional thrust that is both honest and credible, it’s a movie that resonates long after its tragic yet powerful ending.