And so begins Phase 3 of the Marvel Cinematic Universe. Though the Marvel formula is pretty well established now, and is beginning to show through a little too often for comfort – Avengers: Age of Ultron (2015) disappoints more and more with repeated viewings, Ant-Man (2015) was fun but too married to the formula for its own good – the company that should finally give us the Spider-Man movie a lot of people have been waiting for, has cannily begun the process of dismantling and rebuilding the work it carried out in Phases 1 and 2. Having introduced us to the more well-known Marvel superheroes – Iron Man, Thor, the Hulk, Captain America etc. – over the next few years we’re going to meet several newer additions to the roster, so that by the time we get to Avengers: Infinity War Part II (2019), the Avengers will hopefully be comprised of a different set of superheroes.

With that in mind, there’s a lot that needs to happen before then, and while Captain America: Civil War looks as if it’s the first step in getting there, and while it’s still the best Marvel movie this side of Guardians of the Galaxy (2014), Marvel are still playing it safe in terms of the characters – contrary to what you may have heard, all the main players survive in this movie – but they are trying to make things grittier and more true to life in relation to the characters’ relationships and feelings. Hence we have a falling out between Tony Stark (Downey Jr) and Steve Rogers (Evans) over whether or not the Avengers should be “policed” following the destructive events in Sokovia. Tony believes that their actions in the past have caused too much death and suffering (even though they’ve saved the world twice), while Steve feels that it shouldn’t be left up to anyone else but the Avengers as to where they go and who they stand up to; what if they’re not asked to go somewhere they should be? 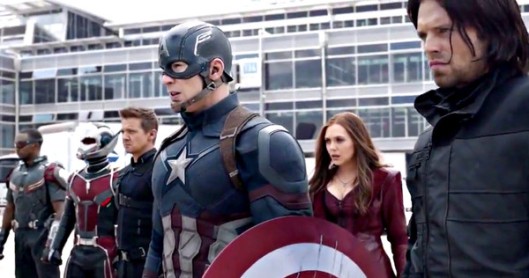 It all leads to the various core Avengers – except for an absent Thor and Bruce Banner – taking sides over the issue, and for each side to bring in back up when it’s clear that a showdown is inevitable. Meanwhile, as if things aren’t bad enough, Steve’s old friend and Winter Soldier, Bucky Barnes (Stan) is still on the run and apparently responsible for the bombing of a United Nations building that has taken the life of T’Chaka (Kani), the king of African nation Wakanda. His son, T’Challa (Boseman), swears to have his revenge on Barnes, and with Steve unwilling to give up on his friend, the battle lines are even more fiercely drawn. (T’Challa is one of the new characters, aka Black Panther, and will have his own movie in 2018.)

What it all boils down to is whether or not the Avengers should be autonomous or inducted into the world’s police force and used accordingly. There are good reasons on both sides for inclusion or exclusion but the interesting thing about the arguments put forward is that Tony’s are emotionally driven by his feelings of guilt over the numerous deaths that occurred in Sokovia, while Steve’s are still rooted in his past. Having fought against Hitler and Hydra both in World War II, Steve knows one thing for sure: if there’s evil to be faced and defeated, then you just do it. It’s a simple idea, but for Steve a very powerful one. And though the movie does its best to keep the narrative focused on this divisive idea, there’s a spanner in the works.

The “spanner” is this movie’s principal villain, Colonel Helmut Zemo (Brühl), who is operating in the background and using Barnes’ past to cause maximum distrust between Tony and Steve. He’s doing so for personal reasons, and credible ones at that, and they have a bearing on the division that threatens the future of the Avengers. Zemo may not be trying to destroy the world like Loki or Ultron, but it’s good to see a villain causing so much harm all by himself and without an army of aliens or robots to help him. Brühl puts in a good performance, and its one whose quiet determination isn’t overwhelmed by all the sturm und drang going on around him. But Zemo is also the device by which the Avengers reach their own accord, an uneasy truce if you like, but one that introduces a further interesting dynamic for future movies.

As for the other characters, and with so many to include, the script by Christopher Markus and Stephen McFeely rightly concentrates on the falling out between Tony and Steve, while doing its best to address and develop issues surrounding everyone else. There’s the tentative romance brewing between Vision (Bettany) and Scarlet Witch (Olsen) that has them on opposite sides (as well as Vision’s understanding of the Infinity Stone in his forehead), the return of General Thaddeus Ross (Hurt) as the man charged with bringing the Avengers into line, the various drawbacks encountered by Falcon (Mackie) and War Machine (Cheadle) as the sidekicks of Captain America and Iron Man respectively, Black Widow’s (Johansson) kick-ass yet conciliatory occupation of the middle ground when necessary, the return of Hawkeye (Renner) to make up the numbers on Cap’s side, and the return also of Scott Lang aka Ant-Man (Rudd) who provides much of the comedy that makes the airport confrontation so much fun.

As mentioned before, we’re introduced to one of Phase 3’s newer characters, Black Panther. Originally meant to have a much smaller role in Captain America: Civil War, Boseman’s portrayal is extremely good, and bodes well for his solo outing. The character’s place in the MCU is assured thanks to the way in which the script integrates his own personal mission of revenge into Tony’s attempts to achieve regulation of the Avengers. Neither a part of the Avengers or against them, Black Panther is a neutral figure in terms of the differences affecting them, and acts as a buffer for the audience by following his own path. 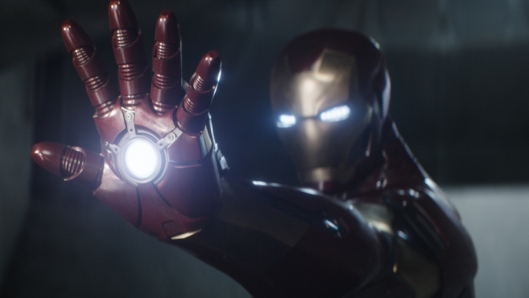 And then there’s the little matter of finally seeing Peter Parker aka Spider-Man in a Marvel movie – at last. With all due respect to Sam Raimi and Tobey Maguire, and Marc Webb and Andrew Garfield, in the space of roughly half an hour, the Russo brothers and the writers have given us the best Spidey yet seen on the big screen. Holland is terrific as the garrulous super-teen, nervous and perplexed in his meeting with Tony Stark, unabashedly starstruck in his set-to with Captain America et al. It’s an absolute joy to see him portrayed in this fashion, and for fans who stay to (almost) the very end, the caveat “Soider-Man will return” (a la James Bond) will be a welcome sight.

With this movie, Marvel has begun the next Phase of its assault on our hearts and minds and disposable incomes in such an enjoyable way that even though it’s not a movie that takes any real risks with either its characters or the storyline, it’s still a marked improvement on recent outings. The humour is there, the action/fight scenes are as inventive and thrilling as ever, and (some of) the characters are allowed to develop further, thereby consolidating our affection for them. It’s a huge juggling act, but here the writers and the Russo brothers have made such a good job of things that there are only minor gripes to be had, and those aren’t really worth mentioning. Where Guardians of the Galaxy raised the bar considerably for the MCU, Captain America: Civil War has just vaulted over it with accomplished ease.

Rating: 9/10 – while many may regard this as just Avengers 2.5, there’s more to Captain America: Civil War than meets the eye, and Marvel can be rightly proud of what they’ve achieved; as a stand-alone movie it works incredibly well, and as a part of the wider MCU it’s even more effective, being more tightly scripted and more efficiently directed than any other superhero movies out there at the moment – and yes, that does mean Batman v Superman: Dawn of Justice (2016).