Yes, it’s already that time again when we look ahead to some of the movies coming our way in 2016. You might notice a slight bias towards superhero movies, but that’s not my bias, it’s the studios, all of whom seem to feel there’s a lot of life in the old genre yet. That remains to be seen, of course, but there are plenty of other movies worthy of our attention next year, and here are the first twenty-five out of fifty. See how many you’re looking forward to.

1) Alice Through the Looking Glass – The storyline is being kept under wraps for now, but what we do know is that most of the cast from Alice in Wonderland are back, although James Bobin is sitting in the director’s chair instead of Tim Burton (who’s now only a producer). Magical, fantastical, charming – if it’s any of these things then there’s a good chance it’ll be as successful at the box office as its predecessor.

2) The Magnificent Seven – One of many remakes for 2016, Antoine Fuqua’s take on the classic Western (itself based on Kurosawa’s Seven Samurai) features a great cast as the titular mercenaries for hire – including Denzel Washington, Ethan Hawke and Chris Pratt – and promises to be as compelling and authoritative as John Sturges’ 1960 version. Let’s hope that John Lee Hancock and Nic Pizzolatto’s screenplay is up to the task.

3) Snowden – Oliver Stone makes a welcome return to the big screen with another confrontational look at the state of US politics, and the shady secrets America’s government would rather we didn’t know about. With CITIZENFOUR (2014) already acting as a primer for audiences interested in Edward Snowden’s whistleblowing exploits, it’ll be interesting to see if Stone can bring his usual outrage and savage condemnation of political hypocrisy to the table without it being watered down.

4) Doctor Strange – Marvel introduce yet another of their vast stable of superheroes, with actor of the moment Benedict Cumberbatch assuming the mantle of Earth’s Sorcerer Supreme. Expect spells and other dimensions and supernatural threats tempered with knowing humour, and a nod to the wider Marvel Cinematic Universe popping up (probably) after the end credits.

5) Ghostbusters – They’re back, only this time they’re all female! This gender variation on the classic Eighties comedy has all the potential to be as funny as the original and just as successful at the box office. With Paul Feig ensuring things go bump in the night, and a role for Bill Murray (though not as Peter Venkman), the only important box left to be ticked is the theme song. Now, who they gonna call?

6) The Secret Life of Pets – The trailer is fantastic, and features some of the cleverest animal-related jokes that Illumination Entertainment can come up with. Without a Minion in sight, can this do as well as expected? Let’s hope so, because if the Internet has taught us anything, it’s that seeing animals getting into trouble when they think we’re not looking is often the funniest thing ever.

7) The Girl on the Train – Paula Hawkins’ impressive novel is given the big screen treatment with a screenplay by Erin Cressida Wilson, whose previous work includes Fur: An Imaginary Portrait of Diane Arbus (2006) and Chloe (2009). With Emily Blunt taking on the central character who becomes embroiled in the mysterious disappearance of a woman she doesn’t know, only the choice of Tate Taylor as director is any cause for concern.

8) Zoolander 2 – Long-awaited sequel finally arrives and finds male supermodel Derek Zealander still as vain (and stupid) as he’s always been. With a strong supporting cast including Owen Wilson, Will Ferrell and Penélope Cruz, director and star Ben Stiller appears to have retained the comic energy that made the original such a good movie, and throws in a few cameos to keep the audience on their toes.

9) The Bad Batch – Ana Lily Amirpour follows up The Girl Who Walked Home Alone at Night (2014) with another nightmarish fantasy that focuses on a love story set in a community of cannibals living in a Texas wasteland. However this turns out, Amirpour is a clever, talented director with a fascinating visual style, and a unique way of looking at the world. With luck we’ll get something bizarre, quirky, strange and amazing.

10) Independence Day: Resurgence – Twenty years after the world successfully fought off an alien invasion, they’re back, and more destructive than before. Director Roland Emmerich assembles several members of the original cast (including, surprisingly, Brent Spiner), but has to rely on Liam Hemsworth to fill Will Smith’s shoes (and is that really fair?). Expect devastation on a global scale once more, but how much will have been done with scale models?

11) Deadpool – After his less than thrilling introduction in X-Men Origins: Wolverine (2009), the self-styled Merc With a Mouth gets his own movie, and is portrayed by big fan Ryan Reynolds. The anarchic humour and intense violence associated with the character is firmly on display in the trailer, and Reynolds seems to have nailed the character’s mix of arrogance and charm, and if the storyline’s right then we can say hello to another superhero franchise.

12) The Light Between Oceans – A beautifully written novel is hopefully translated into a beautifully made movie, as Derek Cianfrance adapts and directs this tale of a lighthouse keeper and his wife – the ever-reliable Alicia Vikander and Michael Fassbender – who raise a baby they rescue from a drifting rowboat. Set off the coast of Western Australia, this has all the potential of being an awards winner down the line, and an audience favourite.

13) The Great Wall – The latest from Yimou Zhang – Raise the Red Lantern (1991), House of Flying Daggers (2004) – is a mystery centred around the construction of China’s Great Wall. With a cast that includes Willem Dafoe, Matt Damon and Andy Lau, this may be one of Yimou’s more mainstream movies, but there’s no doubting it will be spectacular to see as well.

14) Nocturnal Animals – Adapted from Austin Wright’s novel of the same name, Tom Ford’s second movie after A Single Man (2009) is a tale within a tale that sees a woman sent a manuscript by her ex-husband whom she left twenty years before. He wants her opinion on the manuscript, and as she reads it, she’s forced to confront a number of dark truth about herself. Amy Adams is the lucky woman, and the cast also includes Jake Gyllenhaal, Michael Shannon and Armie Hammer. This could be one of the most fascinating, and stylish, dramas of 2016.

15) Fantastic Beasts and Where to Find Them – The J.K. Rowling bandwagon carries on rolling along with this adaptation of her companion book to the Harry Potter series. Focusing on the adventures of writer Newt Scamander (Eddie Redmayne) as he navigates the secret world of New York’s wizards and witches, a chance to relive the magic of the world of young Mr Potter may not be as successful as the eight-movie series, but will be a welcome contribution to the year’s releases.

16) The Huntsman – A prequel to Snow White and the Huntsman (2012), this promises to be an origin story for the Huntsman character to come, and a chance to expand the universe that’s already been created, thanks to the inclusion of Emily Blunt as the Snow Queen, Freya. With Charlize Theron and Chris Hemsworth reprising their roles, and directing duties handed over to Cedric Nicolas-Troyan (who worked as a second unit director on the first movie), this could go either way, but should still remain an entertaining fantasy.

17) Clerks III – The final part of the trilogy that began back in 1994, this sees Kevin Smith return to his roots as a movie-maker, and reunites the original cast plus Rosario Dawson from Clerks II (2006). Fans expecting scabrous dialogue and enough witty banter to sink a battleship are unlikely to be disappointed, and they should thank their lucky stars that Tusk (2014) was as successful as it was, because without that success, this probably wouldn’t have been made. 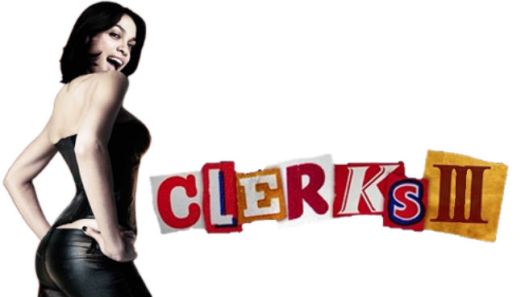 18) The Adventures of Tintin: Red Rackham’s Treasure – Now that he’s able to leave Middle Earth behind and concentrate on something else, it’s Peter Jackson’s turn to make a Tintin movie, and the second of the planned trilogy. With this being two firsts for the director – first animated feature, first movie where the screenplay hasn’t been written by him – and with Steven Spielberg’s entry receiving a lukewarm response from critics and audiences alike, Jackson has his work cut out for him. But if anyone can maximise mo-cap animation to its full potential then it’s Jackson.

19) USS Indianapolis: Men of Courage – The true story of the sinking of the US warship Indianapolis in the Philippine Sea during World War II, and the five days the survivors spent waiting for help, was memorably recounted by Robert Shaw in Jaws (1975). Hopefully this will be as emotive and heart-stopping as the circumstances require, and even though Nicolas Cage is the star, here’s hoping his recent track record is sidelined on this occasion.

20) Captain America: Civil War – Already hyped to the stars and back because of the likely inclusion of a certain web-slinger, Chris Evans’ fourth outing as Steve Rogers (five if you include his cameo in Thor: The Dark World) ups the stakes considerably as superheroes takes sides against each other. With pretty much everyone involved except the Hulk and Thor, this could crumble under the weight of trying to tell too many individual stories all at once, but one thing’s for certain: it won’t skimp on the spectacle.

21) Kung Fu Panda 3 – The continuing adventures of unlikely kung fu warrior Po (voiced again by Jack Black) sees our rotund hero on the verge of meeting his real father, and discovering there’s an imminent supernatural threat to everyone’s safety, a threat only he and the Famous Five can defeat. The usual cast return, augmented by Bryan Cranston as Po’s real father, and there’s a sense that the stakes have been upped to provide a more exciting visual experience.

22) Star Trek Beyond – The third in the rebooted series is currently shrouded in secrecy, the makers perhaps having learned their lesson after Star Trek Into Darkness (2013) and the difficulty in keeping some cast members from blabbing various facts about the plot. So far, everything is under wraps, but if the template established by J.J. Abrams is followed, then this will still be a mission to remember, and should translate into box office gold.

23) Imperium – Daniel Radcliffe is the FBI agent tasked with infiltrating a group of white supremacists who plan to build – and use – a dirty bomb. Based on a true story, and giving Radcliffe one of his meatiest roles to date, this should be scary and fascinating all at the same time, while also examining issues of trust, fatalism and homegrown revolution.

24) Ben-Hur – Lew Wallace’s love letter to the early days of Christianity gets its fifth screen outing with Jack Huston and Timur Bekmambetov stepping into the particular shoes of Charlton Heston and William Wyler respectively. As ever, all eyes will be on the chariot race (and any riders wearing wrist watches), while it will be interesting to see if Wallace’s religious beliefs translate well with today’s audiences.

25) Rogue One: A Star Wars Story – Just for those Star Wars fans who can’t wait until 2017 for Episode VIII, Disney has come up with this semi-prequel set between Episode III and Episode IV. Details are as sketchy as you’d expect but the cast does include Ben Mendelsohn and Felicity Jones, and the prospect of Darth Vader making an appearance has already had fans practically creaming their Millennium Falcon-patterned underwear.