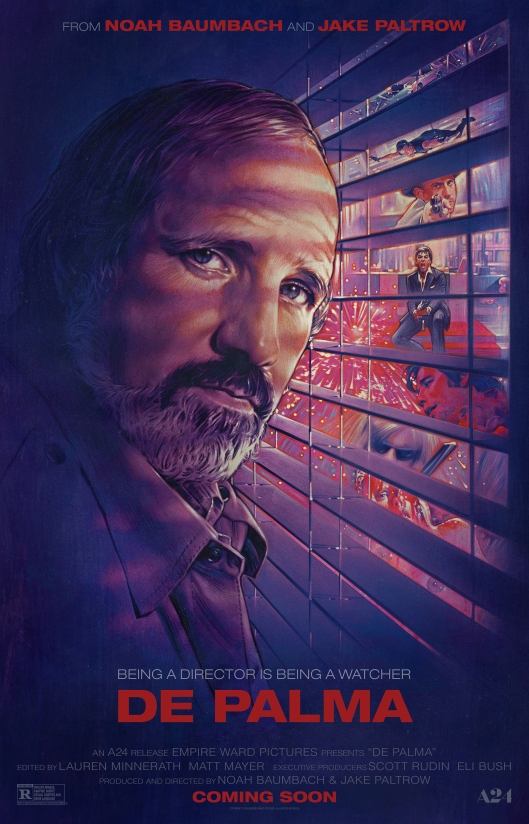 It’s a great idea: take a movie maker whose career spans over fifty years, put him in front of a camera, and let him talk about that career in as much detail as he can. It’s a great idea, and it’s a simple one, and Brian De Palma is a perfect choice. He’s had a career with its fair share of ups and downs, critical and commercial successes and failures, and he’s not hesitant about defending some of the “poor choices” he’s made over the years. From his early days making student shorts such as Woton’s Wake (1962), De Palma is captivating and incisive about his work. He talks about each movie he’s made – some in more depth than others – but always with a view to explaining what he feels went right and what went wrong with each movie, and why. He talks about his disagreements with the studios, with screenwriters (De Palma is possibly the only director who worked with Robert Towne and thought he wasn’t doing a good enough job), and occasionally with actors (his remarks about Cliff Robertson are hilarious).

In terms of actual movie making, De Palma is a knowledgeable, avuncular storyteller, able to recall the reasons he made certain movies, the battles he had to fight to get some of them made, and why some weren’t as successful as others. His reasoning at times is a little self-serving (he still thinks The Bonfire of the Vanities (1990) holds up as a movie), and he’s dismissive of the critics and their views (unless that critic is Pauline Kael, who championed his work when few others would). He has some great anecdotes to tell about the likes of Robert De Niro and Sean Connery, and he’s not afraid to talk about the accusations of exploitation and Hitchcockian mimicry that have dogged his career.

There are well-chosen clips from each of De Palma’s movies, and most serve as visual references for his opinions and recollections. Here and there are revelations that many people won’t be aware of, or have seen, such as the alternative ending to Snake Eyes (1998), and his use of Michael Caine’s double in Dressed to Kill (1980). There’s a whole mineful of useful, interesting information being relayed here, and De Palma is an engaging, smart, occasionally witty interviewee; listening to him talk about the perils involved in getting a movie off the ground is like a masterclass in itself (and it’s happened to him way too often for comfort). But you also get a good sense of how tenacious he’s been in the past, and how determined he’s been to make the movies he’s wanted to make.

If there’s one issue that De Palma the movie is unable to address, it’s that De Palma the man goes unchallenged throughout. By giving De Palma a free pass, he’s allowed to make several remarks that would normally require further exploration (see The Bonfire of the Vanities). This leads, on occasion, to a number of moments where the viewer may be tempted to ask their own questions in the hope that De Palma somehow picks up on them. Someone once observed that “all directors are egomaniacs”, and while De Palma seems a little less egocentric than most, eagle-eyed viewers will notice that he rarely accepts any blame for those of his movies that didn’t work out so well. But then, De Palma is telling his story, not someone else’s, and like any artist who creates alternate realities for a living, sometimes the line between truth and reality can get blurred by self-interest.

Rating: 8/10 – fans of Brian De Palma will find his reminiscences and opinions of great interest, and even casual admirers will be drawn in by his winning (and occasionally) belligerent approach; as mentioned already, De Palma is a great idea, and one that could (and should) be used to capture the views and experiences of his contemporaries – so, calling Mr Spielberg, and Mr Scorsese, and Mr Coppola…