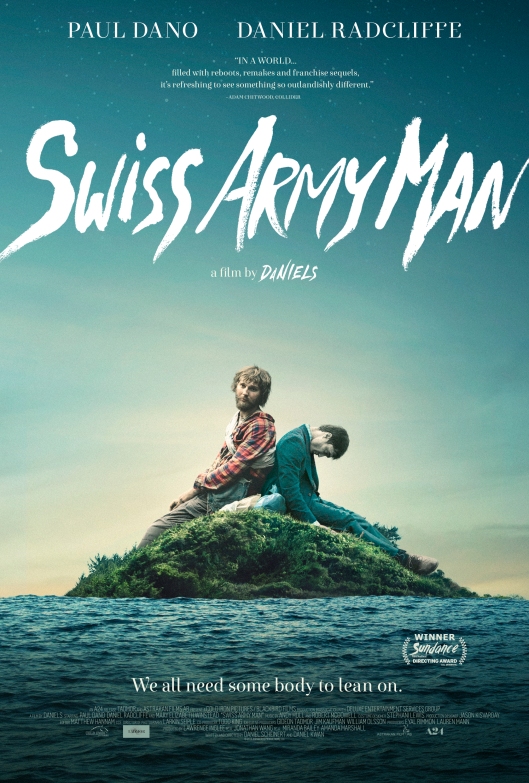 Stranded and alone on an island in the Pacific, Hank Thompson (Dano) has decided to end it all. He’s going to hang himself. But as he’s about to do so he spies a man’s body lying on the shoreline. Hoping the man (Radcliffe) is still alive, Hank forgets about killing himself and rushes to the man’s side. But he’s too late. The man looks as if he’s been in the water for too long, and it’s also not long before the accumulation of the gases inside his body begin to make themselves known. At first, Hank is annoyed and dismayed by the noises (and smells) coming from the man’s corpse, but when the tide starts to carry him back out to sea, Hank realises that the dead man’s flatulence is the answer to his being stranded on the island. Hank straddles the dead man’s back, points him away from the island and lets the escaping gases propel them both across the open ocean. And then he falls off…

Hank comes to on another beach, but this time he’s not on an island somewhere. He’s made it to US soil. And so has the dead man. Feeling a debt of gratitude to the dead man, Hank takes his corpse with him as he begins his trek back to civilisation. That first night he seeks shelter in a cave. The next morning, the corpse begins to speak, hesitantly at first, and then with increasing fluency. His conversation, though, is naïve and childlike, and Hank finds himself having to explain much about life and love and the nature of relationships. The corpse, who Hank names Manny, sees a picture of Hank’s “girlfriend”, Sarah (Winstead), on Hank’s mobile phone. He becomes obsessed with meeting her, so much so that to appease him, Hank constructs a hideout in the woods where he can teach Manny the best way to approach her, and how to talk to her without sounding stupid. 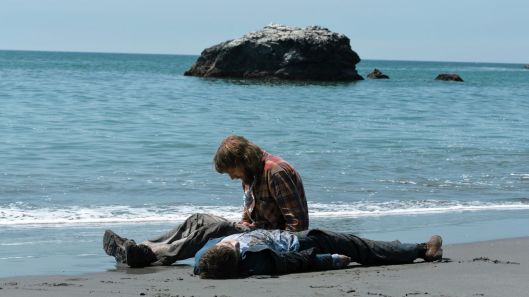 When they move on, they discover that they’ve been nearer to civilisation than either could have expected. And by chance they find themselves in Sarah’s back yard, where her daughter, Chrissy (Ribero) is playing. She’s curious about them at first, but Manny starts talking about being dead and then alive thanks to Hank. Chrissy becomes scared, and Sarah comes out to see what’s going on. When she sees Hank and Manny, she calls the police. In turn, EMT’s arrive to take away Manny’s body, and Hank’s dad (Gross), whom he’s distant from, also turns up. But Hank can’t bear to be separated from Manny, and so he makes one last desperate act of compassion, one that astounds everyone.

At one point in Swiss Army Man, Hank tells Manny that, “You can’t just say anything that comes into your head, that’s bad talking.” Judged against the things that Hank doesn’t say, it’s a self-serving rebuke that highlights just how uncomfortable he is with his own thoughts. If, as seems likely – and despite the best efforts of writers/directors Scheinert and Kwan to make it seem otherwise – that Hank is imagining Manny’s return to life as a way of coping with his own issues of being alone (and not just on the island), then Hank is arguing with himself. Or more accurately, attempting to persuade himself that he doesn’t have to be alone, and that he can find happiness in a relationship with Sarah. But where you might expect Manny to act as a deus ex machina, a source of resolution for Hank’s emotional fragility, what Scheinert and Kwan do in their script – and achieve thanks to two standout performances by Dano and Radcliffe – is make Manny the unbridled id to Hank’s more cautious super-ego. 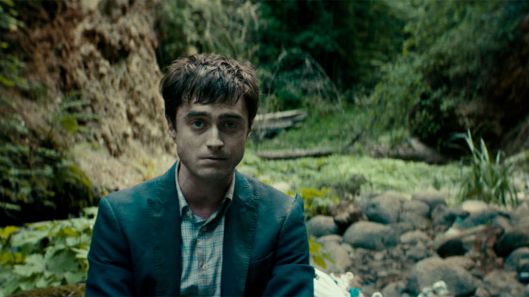 It all makes for a fascinating and delicately balanced examination of one man’s lack of faith in himself. In the same way that we never learn how Hank came to be on the island in the first place, we never learn who Manny really is and why he came to be washed up there either. But it makes perfect sense if you accept that Manny’s physical self is real, and that his subsequent, miraculous ability to talk is due to Hank’s attempts to work out, or through, his own emotional distance from everyone. For Hank, Manny offers him a chance to examine his life and begin to make a difference. But Manny’s “approach” to life is the antithesis of how Hank approaches life; it’s no coincidence that Manny appears to be more “alive” than Hank.

By “resurrecting” Manny and making him Hank’s companion and eventual friend, Scheinert and Kwan have created a unique cinematic relationship. There’s a troubling sequence around the hour mark where Hank dresses up as Sarah in order to teach Manny what to say and how to behave around her. From this we can discern the exact nature of Hank’s relationship with Sarah, and also just how important it is to him. The sequence is troubling for the way in which Hank readily becomes Sarah, and readily accepts the off-kilter “courtship” that ensues. It all leads to a moment that is both uncomfortable for the audience and potentially cathartic for Hank, but he backs away at the last second, content still to grab defeat from the jaws of victory.

It’s been said elsewhere, but Swiss Army Man is definitely unlike any other movie you’ve ever seen. As if its basic premise isn’t bizarre enough, Scheinert and Kwan’s decision to include metaphysical and reality-bending aspects to the narrative makes it even more extraordinary, and so too is their decision not to shy away from the more singular side effects of being a corpse (“Manny, I think your penis is guiding us home”). As mentioned before, the movie benefits greatly from the performances of Dano and Radcliffe, both actors unsurprisingly committed to their roles and unsurprisingly affecting, and effective, as two halves of the same person. Dano’s offbeat acting style suits Hank immensely, his tremulous delivery and poignant facial expressions matched perfectly by Radcliffe’s mostly static gaze and conscience-free dialogue.

Aside from Dano and Radcliffe’s involvement, the movie has plenty else to recommend it, from the two Daniels’ sense of the absurdity of Hank’s situation and his decreasing mental stability, to the crisp, carefully composed cinematography of Larkin Seiple, a catchy indie soundtrack, and a deliciously tart sense of humour that helps alleviate the inherent darkness of the material. It’s not a perfect movie – amongst other things there are too many continuity problems for that – but it is one that brings its own rewards if you’re willing to go along with it. Scheinert and Kwan are to be congratulated for coming up with such an unusual, and diverting, cinematic experience.

Rating: 8/10 – a movie that defies easy categorisation – and for once, that’s a good thing – Swiss Army Man is likely to divide audiences, and be unapologetic for doing so; if you go with it then it’s an outlandish yet entertaining treat, but if you don’t then you’re missing out on one of the most original, inventive and surprising movies made in recent years, and one replete with enough fart jokes to keep anyone and everyone happy.