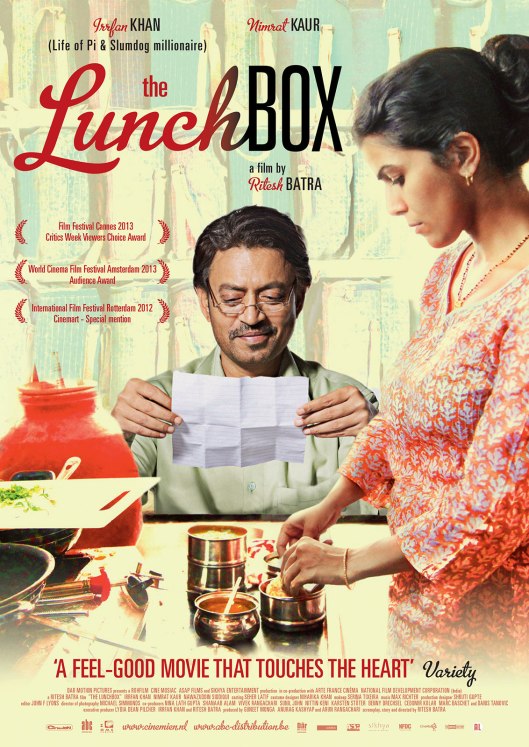 In Mumbai, a dabbawala is literally “one who carries a box”. A dabbawala is part of a delivery system that allows workers who don’t want to eat at a food stand or a restaurant, to have hot, home-cooked food for lunch. The lunchboxes are collected from the worker’s home in the morning, delivered in time for their lunch break, and then returned to the worker’s home by the evening. This service first started in 1890, and has grown to the point where anywhere between 175,000 and 200,000 lunchboxes are delivered every day, and incredibly, it’s estimated that dabbawalas make less than one mistake in every six million deliveries.

It’s this amazing service that forms the backdrop and set up for The Lunchbox, a wonderfully complex, and still very simple, May-December romance that develops between soon-to-retire claims actuary Saajan Fernandes (Khan) and housewife Ila (Kaur). Saajan is a widower, well-regarded in the workplace but somewhat withdrawn from his colleagues. He doesn’t socialise outside of work, and he appears to be resigned to remaining alone. Ila has a husband, Rajeev (Vaid) who is distant from her, and from their young child, Yashvi (Nagar). Ila wants Rajeev to play more of an active part in their marriage; some nights he comes home and doesn’t say a word. Ila’s aunty (Achrekar), who lives in the flat above them, suggests that Ila make delicious lunches for Rajeev, in order to help rekindle the romance they used to have. 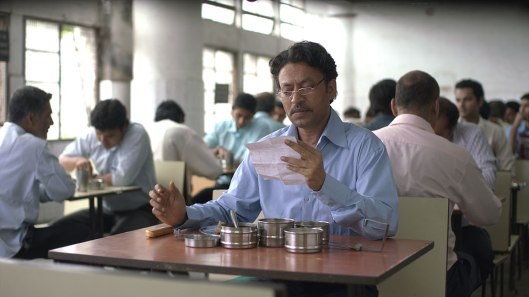 But instead of Rajeev receiving the first of these lunches, it’s Saajan who gets to discover just how good a cook Ila is. When she realises that her husband hasn’t been receiving the lunches, she leaves a note in the next one, advising the person who is getting them, about the mistake. Saajan is amused by this, but he’s even more enamoured by the quality of Ila’s cooking. He replies to her note, and so begins a correspondence that both keep to themselves, and which enables both of them to feel that there is more to life than the boundaries that seem to keep them hemmed in. As their relationship begins to deepen, Saajan has to cope with the irritating interruptions and attention of his successor, Shaikh (Siddiqui), while Ila has to cope with her father’s long-term illness, and the effect it’s having on her mother (Dubey), and the realisation that Rajeev is having an affair.

The first, and so far, only feature from Mumbai-born Ritesh Batra, The Lunchbox is so deceptively simple, and so elegantly complex, that it’s difficult to work out which of these two aspects is the more effective. Ostensibly a romantic drama with comedic overtones, the movie resists the temptation to be acceptably superficial, and instead, lays the groundwork for perceptive ruminations on growing old in modern India, and what it means to accept the role in life you believe you’ve been given. Through Saajan’s listless acceptance of his fate as a widower with no future in retirement, the movie casts an observant eye over what it is to become inured to a certain way of life, and to regard change as unobtainable. Saajan believes his fate is unavoidable, and in believing so, can do nothing about it.

Ila wants her husband back from wherever it is that his mind is taking him. She at least believes she can change things back to how they were, and has yet to resign herself to a stale marriage of convenience. But Rajeev’s continued indifference, and Ila’s eventual discovery of his infidelity, both serve to leave her feeling trapped and unable to make a better life for herself and Yashvi. Thankfully, Saajan’s enjoyment of her food, and his willingness to engage with her via the notes they send each other, allows her to feel that there is hope for the future, whether she leaves Rajeev and goes to live in Bhutan with Yashvi and Saajan (as he suggests at one point), or even if it’s just her and her daughter.

For Saajan, things are made more complicated by his age and his position in the workplace. After thirty-five exemplary years in the same job, he’s retiring out of some sense of commitment to the memory of his late wife. Closed off from everyone, including himself from time to time, Saajan has resigned himself to a life of anonymity and seclusion, and in a place, Nashik, for which he has little actual enthusiasm. It’s only through the persistence of his successor, the garrulous and irritating Shaikh, and Ila’s notes, that Saajan begins to come out of his shell. He becomes more outgoing, less gloomy, and he tolerates Shaikh’s ebullient behaviour, even when he joins Saajan for lunch and the older man finds himself sharing with the younger man – and is surprised to find he’s happy to do so.

Saajan and Ila’s relationship develops to the point where the audience is practically praying that they’ll meet and properly fall in love, and not rely on the kind of epistolary romance that suits a novel but not necessarily a movie (unless that movie is Whit Stillman’s Love & Friendship). But the course of true love is never known to run smoothly, and despite their obvious need for each other, Saajan’s awareness of the age difference between them leads him to snatch defeat from the jaws of victory. An arranged meeting doesn’t go as planned, and their romance suffers as a result, leaving both parties to decide if what they had was even tangible. Decisions are made, and though they seem immutable, Batra’s clever script allows for optimism in the face of dramatic certainty.

Batra is helped immensely by his two leads. Khan is a perceptive, dignified actor, and he brings those qualities to bear on a role that requires him to reveal more and more about Saajan as the movie progresses. With his gaze registering bemused astonishment with every mouthful and smell of Ila’s cooking, Khan is a delight to watch, and he handles the disappointments and self-imposed barriers to living that Saajan endures with an emotional clarity that is an acting masterclass all by itself. Kaur is equally impressive. Whether Ila is trading quips or recipe tips with her aunty, or whether she’s coming to terms with the likelihood of a loveless marriage for years to come, the actress displays a range and an understanding of her character’s situation that is breathtaking to watch. Both actors are superb here, so much so that it’s very difficult to envisage anyone else in either role.

With Batra proving to be as good a screenwriter as he is a director, The Lunchbox is in very good hands throughout. He makes a background character out of the city of Mumbai, and the hustle and bustle of its streets and trains and buses – all constant reminders that life goes on around us, vibrant and compulsive, even if we choose to step back from it – is used to potent effect, as Saajan in particular experiences its highs and lows. Batra is aided by sterling work from DoP Michael Simmonds, and the movie’s slow, lyrical pace is courtesy of editor John F. Lyons. Scenes play out sometimes at such a stately pace that it’s hard to believe it’s all been agreed in advance, and that so many quiet moments could have such a cumulative, and remarkable effect. But the pace and the tone of the movie are aspects that have been achieved with a great deal of skill, and they serve the material with undisguised aplomb.

Rating: 9/10 – a beautifully observed, beautifully constructed movie that takes two trapped souls and sets them free by virtue of their finding in each other a kindred spirit, The Lunchbox is touching, affecting, stylish, and endlessly gracious in its delivery; a sparkling romantic drama that pays dividends from the very start, and which never short changes either its characters or its audience, it’s a movie that delights with ease, and lingers in the memory long after it’s over.