In Ritesh Batra’s first movie since The Lunchbox (2013), Jim Broadbent’s elderly divorcé, Tony Webster, receives a solicitor’s letter telling him that he has been left something in the will of a woman he knew back in the Sixties. The woman was Susan Ford (Mortimer), the mother of Tony’s first love, Veronica (Mavor). At first, Tony is puzzled by the news, and he’s further puzzled when he discovers that the “something” is the diary of a schoolfriend, Adrian Finn (Alwyn). This prompts Tony to reflect back on his life as a university student, and his relationship with Veronica. But getting hold of Adrian’s diary proves more difficult than he expects; it’s in Veronica’s hands and she’s not passing it on to her solicitors’.

Tony seeks advice from his ex-wife, Margaret (Walter), who is also in the legal profession. Margaret, though, can’t understand why getting hold of the diary means so much to Tony, so he attempts to tell her the story of how he and Veronica met, and the beginning of his friendship with Adrian. As he recounts that period of his life, Tony remembers times and events that he had largely forgotten, and he begins to suspect that things were happening that he wasn’t fully aware of. Eventually he persuades Veronica’s solicitors to ask her to contact him, and they arrange to meet. Tony is expectant that he’ll finally receive the diary, but Veronica is distant and tells him that she’s burnt it. After the meeting, Tony follows Veronica but is unable to find out where she lives.

Tony’s memories of his student days continue to plague him, forcing him to remember a letter he wrote when Veronica stopped seeing him and began seeing Adrian instead. The events that followed his sending the letter make Tony view himself in a bad light, but then another attempt to follow Veronica reveals a circumstance that takes him by surprise. In time, this circumstance shows that his understanding of the events of his school days is not only flawed, but has informed the majority of his adult life, something that means Tony has to face up to the idea that he’s lived a life that could have been very much different.

An adaptation of Julian Barnes’ 2011 Man Booker Prize-winning novel, The Sense of an Ending is the kind of low-key, measured drama that offers big rewards provided that you can get past its slow, deceptively pedestrian approach. This is a movie that relies on teasing out the emotional undercurrents of its story, and doing so in a well considered, thoughtful manner that makes each revelation and divulgence of motive more affecting than you might suspect. Barnes’ novel concerned itself with notions of memory and ageing, and while both those aspects are present here, there are others that are equally potent. Adapted by Nick Payne, the movie seeks to explore the ways in which the actions of our youth inform our behaviour as adults, and the ways in which the consequences of those actions can lead to repressed feelings and the slow accumulation of guilt.

At the beginning of the movie, Tony has no understanding of the events that surrounded him as a student, other than how they affected him at the time. However, Tony’s involvement, when looked at closely, was entirely minimal, and as the movie progresses and we see more of those events unfold, what emerges is a portrait of a man trying to attach meaning to a period of his life where he was in many ways a supporting character in the drama of everyone else’s lives. It’s instructive that as an adult Tony’s life is lived somewhat on the fringes as well. He’s divorced though still in touch with his ex-wife, has a daughter whose pregnancy brings them only slightly more together (he attends a pre-natal class with her), and owns a business that sells classic Leica cameras (in a very small shop). It’s not clear that he has any appreciable “life” beyond these things, and his general demeanour is dismissive. He may not be living in the past – until the solicitor’s letter arrives that is – but he’s not exactly living in the present either.

As the past exerts a fearsome pull on Tony, his memories begin to have a profound effect on him, leading him to question what he remembers and what actually happened. Veronica is pre-disposed not to help him, and as her story is revealed you can understand why. But Tony’s determination to solve the mystery of his youth and reconstruct his younger self from the tangle of his memories at least proves cathartic, and by the movie’s end he’s more settled than perhaps he’s ever been. As we follow Tony on his journey of self-rediscovery, we’re guided along the way by another terrific performance from the ever-reliable Broadbent, whose initially perplexed expressions speak of credible bemusement. But soon these give way to expressions of doubt and regret, as the full enormity of what happened all those years ago begins to unravel and Tony’s foundations as an adult begin to crumble. Broadbent allows the audience to see the tragic trajectory of Tony’s life, and the hollow man he’s become, and still he maintains a sympathy for the character that’s not entirely deserved. 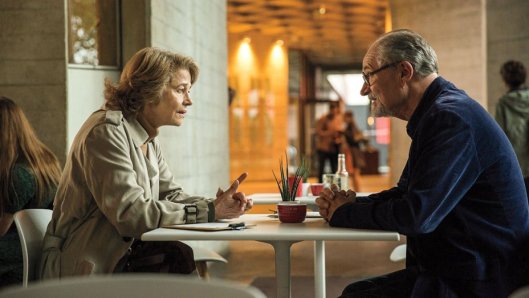 Carrying the majority of the movie, Broadbent is simply magnificent in a role that is heartfelt, honest and sincere. He’s also at the top of a very impressive cast, with Rampling excelling as usual as Veronica, a woman who has no time for broad introspection or revisiting a past that is painful to her if not to Tony. The rest of the cast provide sterling support, with special mentions going to Howle as the younger Tony, and Mortimer as Veronica’s mother. Even the likes of Goode and Holcroft (as Tony’s teacher and Veronica’s brother respectively) make an impact despite being given less to do than others, and Alwyn – in only his second movie after Billy Lynn’s Long Halftime Walk (2016) – handles Finn’s philosophical musings with both humour and subtlety.

The contrasts between the past and the present are handled well by Batra and his talented production crew, with Tony’s student days presented in a warm, nostalgic glow that could be considered rose-tinted were it not for the tragic elements at the heart of it all. The present day is much more airy and coolly defined, with sharper colours and rigid edges used to define the emotional trap waiting for Tony to walk into it. Batra displays a confidence with the material that keeps it all feeling genuine and without guile, and as the narrative builds toward its inevitable (and only semi-signposted) revelation, his skill at revealing the various complexities of Tony’s student days becomes more and more evident. And by the time Tony’s daughter has given birth and he’s accepted his life for what it can be rather than what it is, the movie has provided rich dividends for the viewer willing to look beyond its superficially mundane surface.

Rating: 8/10 – something of a mood piece, but bolstered by assured direction, a weighty and compelling script, and skilled performances from its cast, The Sense of an Ending is an engaging and thought-provoking movie that makes a virtue of its earnest and somewhat melancholy narrative; a prime example of a literary adaptation that takes the virtues of its source material and adds a smattering of cinematic probity to the mix, it’s a plaintive, absorbing investigation into the nature of elusive recall and the relationship between memory and remembrance.