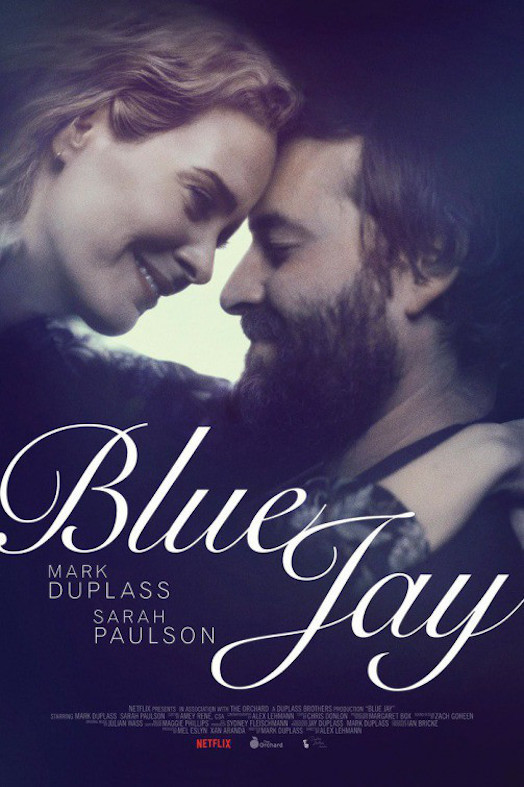 Having been living and working in Tucson for a while, Jim (Duplass) returns to his childhood home in California following the death of his mother. He’s in the process of going through the house and clearing it when a trip to the local supermarket finds him bumping into Amanda (Paulson), his teenage sweetheart. She’s in town visiting her sister who’s having a baby. At first, their meeting up is awkward and their attempts at conversation are stilted. They part, but outside in the parking lot, Jim asks Amanda if she’d like to go get a coffee. She agrees, and they head for the nearby Blue Jay diner.

There they begin to catch up properly. Jim reveals that he’s been doing dry wall work with his uncle in Tucson, and is thinking of doing up his mother’s house and selling it, while Amanda speaks of her marriage to Chris, and finding herself a mother to his two kids when they got married. Both tell each other their lives are good, but it’s clear that Jim isn’t as happy as Amanda appears to be. From the diner they go to a store they used to frequent as teenagers, and where the owner, Waynie (Gulager), still remembers them after twenty-two years. From there they venture to a spot near the river where they used to go. There, Jim reveals that he doesn’t have a job at the moment due to a falling out with his uncle, and that he doesn’t have a clue what he’s going to do next.

Amanda tells him she wants to see his mother’s house. When they get there, Amanda is astonished by the amount of stuff that’s still there from the time they were together: from mixtapes to photos to notebooks and letters, and one unopened letter in particular that’s addressed to her, and which she hides in her coat pocket. Jim digs out an old cassette player and they listen to recordings they made, and one where they were pretending to be an old married couple celebrating their fortieth wedding anniversary. They reminisce further, and decide to recreate that fictitious anniversary through having a meal together. As the evening wears on, both Jim and Amanda begin to grow closer, until it seems that their past will overshadow the present…

Although there are several moments in Blue Jay where Mark Duplass’s “script” seems hellbent on striking a pose for lost love, and its reclamation, it’s thanks to said “script” being an outline around which both Duplass and Paulson have improvised their dialogue, that it avoids this likely pitfall, and in doing so makes Jim and Amanda’s predicament all the more credible. Make no mistake, the relationship and the conversations that occur in the movie, could only happen in a movie, and though this level of artifice has all the potential of feeling flat and awkward to watch, it’s a mark of the commitment and the intelligence of its two stars that Blue Jay never once feels forced or uncomfortably set up.

However, this is an ex-couple who have secrets to reveal, and it’s the way in which these secrets are held at bay until the last ten minutes that is worrisome in terms of what goes before. At first, and despite their initial awkwardness with each other, Jim and Amanda appear to pick up from where they have left off over twenty years ago, and even though we don’t know the reason they split up, there aren’t any signs that it was contentious on either side, or that it’s left them embittered with each other. They’re open and (mostly) honest with each other, and they’re clearly enjoying being together again after such a long time. As well, both Duplass and Paulson seem at ease with each other as actors, and they have a confidence in each other’s abilities that helps the story and their characters along.

Back at Jim’s mother’s house – or his boyhood home, though it’s interesting that it’s rarely referred to as that – further reminders of the past spark what can only be described as an unsettling game of role playing. Watching these two ex-lovers play at being a couple celebrating their twentieth wedding anniversary, is an odd, worrisome turn of events that prompts the question, why would they do that? Or, why would they feel the need to revisit the games of their youth in that particular way? Are they that unhappy with their lives now? The answers to those questions remain unanswered for the most part, with only hints and clues dropped at random in the conversations that follow, but what is clear is that there’s a longing for some kind of connection that they don’t have with anyone else. Maybe the role playing facilitates that, and brings them back to the people, the couple, they once were. Maybe that period was their relationship peak.

You can interpret their actions in many different ways, and the likelihood would be that no one interpretation would be completely wrong or completely right. Duplass and Lehmann (making his feature debut), don’t appear to want the movie to be that black and white (and despite it being shot in that format), but once the reason for their split is revealed it has such a jarring effect that it’s a bit like being slapped in the face. And it has the unfortunate effect of calling into question everything that’s gone before, and the ease with which these two have reconnected. Would their running into each other really have led to coffee and jelly beans and dinner and head rubs? Wouldn’t the wedge that drove them apart still be there, and as it happens, especially on Jim’s side?

In the real world, absolutely (it’s a very big wedge). But again this is a movie, and though we can allow some suspension of disbelief, and admire the consistency of tone and purpose that’s been achieved, the movie is derailed by its revelation; and by the scene that follows, which aims for some degree of closure, but ends up looking and sounding incomplete, the one time in the movie where Duplass, Paulson and Lehmann have decided that what they’ve got is just enough (or perhaps worse still, will have to do). In the end, it upsets the rhythms established earlier in the movie, and leaves the viewer feeling that they’ve been tricked into having to accept an ending that doesn’t match what’s gone before.

Rating: 8/10 – despite it’s unsatisfactory denouement, Blue Jay has much to recommend it, and Duplass and Paulson should be congratulated for maintaining the truth of their characters through improvisation and intuition; Lehmann’s shiny black and white photography enhances the sense of nostalgia the movie revels in, and its quiet, brooding nature is a perfect fit for the way in which the characters move around each other.