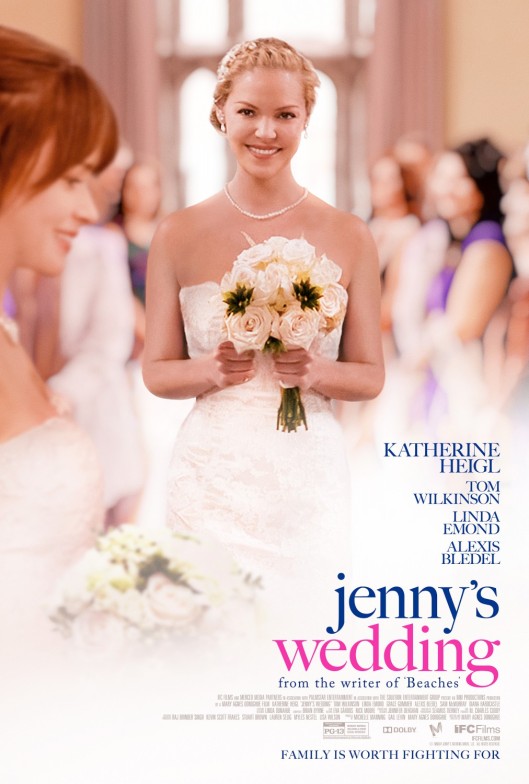 Jenny Farrell (Heigl) is the eldest daughter of fireman Eddie (Wilkinson) and housewife Rose (Emond). She works at placing foster kids and orphans in suitable homes, is well liked and admired by everyone around her – except maybe her younger sister, Anne (Gummer) – and is in a lesbian relationship with her (ostensible) flatmate, Kitty (Bledel). Jenny has never come out to her family because she doesn’t think they’d be able to handle it. Of course, this means she’s lied to them for a number of years now, and as with all lies that are prolonged beyond any possible good they may have done in the first place, Jenny has at least understood that if she tells them, they’ll be hurt and disappointed. But a conversation with her father about marriage and having children and all the responsibility that comes with it, leads Jenny to realise that that’s what she wants: to be married and have kids too.

So, now she needs to own up about her sexuality, and try and do so in a way that won’t upset everyone. She tells her mother first, but Rose is upset; not for herself per se, but for the knock her standing in the local community will take if everyone else was to know. She makes Jenny promise not to tell anyone else except her father, and not even Anne. Not wanting to upset her mother further, Jenny agrees. She tells her dad and while he’s shocked at not having realised after all this time, he’s initially much more supportive than Rose, though he goes along with her wishes.

Jenny and Kitty begin to plan their wedding. While they do so, Eddie and Rose struggle with the knowledge that Jenny has lied to them, and that they don’t know how to react. The relationships between the three of them begin to unravel, and are thrown into even more chaos when Anne sees her sister and Kitty kissing in a bridal store. When she learns that her parents have known about Jenny being a lesbian, and haven’t told her, Anne is devastated. But it does make her begin to question her marriage to layabout Frankie (Rhines), and the reason their front lawn isn’t green (don’t worry, it does makes sense within the movie). Things reach boiling point, though, at a funeral for a friend and neighbour where a confrontation between her father and Jenny leads to them becoming estranged. As the big day approaches, loyalties are challenged, relationships are tested, and prejudices appear set to interfere with, and derail, Jenny’s happiness.

Okay, let’s get the obvious out of the way, right at the start: this is not a good movie. Jenny’s Wedding is tired, predictable, asinine in places, dramatically inert for most of its running time, features another performance from Heigl that makes you wonder how she’s still getting lead roles, and looks and sounds like a Bible reader for those who find lesbianism distasteful. It’s a movie that suffers from trite dialogue, an unconvincing scenario, poorly realised motivations, and some extremely dodgy sexual politics. It tries hard not to be offensive, but fails every time it tries to make Eddie and Rose’s feelings “acceptable” in terms of their characters. Not even Tom Wilkinson, an actor who can inject genuine feeling and credibility into (almost) every role he plays, is stymied here by a script – courtesy of Donoghue – that asks him to either spout platitudes or inanities as a matter of course, and hunch over as if the weight of the world (or the movie’s ineptitude) was on his shoulders.

But there is one area where the movie is interesting, and it’s one that’s far beyond any expectation of achievement you could have hoped for. While Donoghue piles agony after agony onto a much more deserving Jenny than she probably intended, the movie’s creator tells a much better story about the lies we tell and the reasons we tell them. Jenny lies from the start but puts the onus on her parents for doing so, an act of cowardice that should offset any sympathy we have for her. As the movie progresses, Jenny continues to justify her having lied to her family because she’s unable to trust them to be supportive, and then she acts all hurt and surprised when the amount of time she’s spent lying to them prompts the exact reaction she’s been afraid of. The movie actively punishes her for doing so, an act of retribution that’s far more effective than expected precisely because Jenny is the main character and the audience is – nominally at least – supposed to be on her side.

But Jenny’s parents are just as bad, and although it’s out of confusion, their lies are based around, first, their helplessness about how they feel, and second, about the repercussions they’re likely to experience amongst their friends (in Rose’s case) and colleagues (in Eddie’s case). They lie out of fear and mistrust of others, and it’s here that Donoghue unexpectedly provides the most interesting aspect of the movie as a whole: that daughter and parents are entirely alike. And yet when the inevitable last-minute reconciliation occurs between Jenny and Eddie (Rose comes around much sooner), this isn’t mentioned at all. Instead, Donoghue, clearly unaware of the connection she’s made through her own script, trots out a sorry tale of male emasculation for Eddie’s recalcitrance, and leaves Wilkinson looking embarrassed for having to explain it all.

There are lies and lying behaviour elsewhere in the movie. Anne’s husband Frankie is always going out on “business” late at night, a clear indication that he’s having an affair, and Rose’s friend, Ellen (Hardcastle), is the kind of hypocritical busybody who’ll take any piece of bad news and use it to her own ends, and embellish her own role at the same time. Her faux sympathy and understanding are a kind of insidious lying, and all the more unforgivable. Again, it’s this element of the movie, whether deliberately included or not, that gives it an edge that the so-called drama of Jenny getting her wedding day as wished for and planned doesn’t have (of course she’s going to get married and have kids – eventually; this is a fairy tale dressed up as a middling drama of expectations).

Like many other romantic dramas, Jenny’s Wedding could be seen as a comedy at heart, but while there are a handful of comic moments, this is a serious attempt at exploring… something. If it’s not readily clear then it doesn’t really impact on any enjoyment that can be had, and aside from the waste of Tom Wilkinson’s time and effort – it really is a stinker of a role – there’s Gummer’s performance to be appreciated, and odd moments where Emond also elevates things by sheer dint of effort. Otherwise, Donoghue struggles at maintaining a consistent tone, and avoids making anyone a bad guy, something that might have upped the drama and made it more interesting. She also marginalises the very relationship that Jenny is involved in, leaving Kitty in the background like an afterthought, and making it all about a self-absorbed coward and liar who wants it all her own way… and if you pay close attention, that attitude never changes.

Rating: 4/10 – some interesting aspects set around lying as a form of personal protection aside, Jenny’s Wedding lacks focus and a central character you can warm to; pedestrian in both its ideas and its presentation, it’s a movie that you’ll forget about soon after seeing it, and serves as another reminder that Heigl’s career is heading nowhere fast.