On paper it must have sounded like a great idea. A US/China co-production directed by Yimou Zhang and starring Matt Damon, and telling one of the legends behind the creation of the Great Wall of China: that it was built to stop a species of monster called the Tao Tei from over-running the country. On paper it promised Zhang’s visionary skill as a director, Damon’s solid acting presence, and some of the most exciting battle scenes this side of The Lord of the Rings trilogy. It would also be the most expensive movie in Chinese history, costing $135 million.

But somewhere along the way, what everyone – the production companies and the producers, Zhang and Damon, anyone else involved – forgot was that the movie was going to need a decent script. Or maybe they were aware it needed a decent script but decided to make do with the one they had (or maybe working with more than one hundred on-set translators didn’t help). However it was, The Great Wall reaches us with its goal to entertain its audience undermined almost from the word go. And it never recovers, offering lazy characterisations, even lazier motivations for its characters, plotting that goes beyond ridiculous, and the kind of moments that are meant to be, well, meaningful but just look and sound awkward. It’s only the well-mounted action sequences that provide any fun, but by the end, any credibility they’ve given the movie has run dry as well. So step forward Max Brooks, Edward Zwick and Marshall Herskovitz who came up with the story, and Carlo Bernard, Doug Miro and Tony Gilroy who actually wrote the script. Give them all a hearty round of applause – and let that be the only acknowledgment they get for coming up with this farrago. 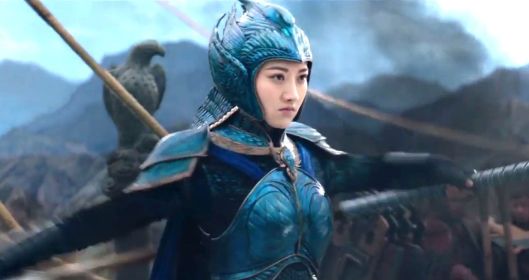 Now obviously, The Great Wall is a fantasy movie, and none of it ever happened for real, but that doesn’t mean that it can’t be grounded as far as possible within its own fantastical world. Matt Damon and Pedro Pascal as mercenaries trying to steal black powder (gunpowder) from the Chinese? Okay, that one’s possible. The Great Wall built to stop a horde of monsters from over-running the country (and by extension, the world)? Ahh, hang on a minute. No, that’s not going to work. There are problems with that idea straight away, and these are problems the movie ignores, as if by ignoring them no one will stop and say, ahhh, hang on a minute… The problem lies with those pesky, awkward timescales, the ones the movie itself comes up with. Seventeen hundred years to build. Okay, but the Tao Tei attack every sixty years, and again according to the movie, have been doing so for two thousand years. So the obvious question is: how is it that the Tao Tei haven’t over-run the country already? There’s thousands upon thousands of the ugly creatures (which must mean their Queen is kept very busy).

To be fair, the movie does try to provide an answer to this conundrum, by mentioning that the Tao Tei are evolving with each sixty year cycle, and becoming more and more intelligent. But then it shoots itself in the foot – again – by giving Damon’s character, William, a large chunk of magnetised rock (don’t ask; really, don’t). Magnets apparently have the ability to literally put the creatures to sleep, something the Chinese are aware of but which they’ve never put to the test. Cue a mission to capture one of the creatures. Once secured, the creature is then whisked off to the capital city of Bianliang where the magnet is removed far enough for the creature to wake up and transmit its location telepathically to its Queen (oh, yes, they’re telepathic as well). And just at the same moment, the Chinese, led by Commander Lin (Jing) and Strategist Wang (Lau) discover that the Tao Tei have been digging a massive tunnel through the Wall and are heading for Bianliang (and no one has noticed this, or spotted them heading for the capital; no, really, no one). 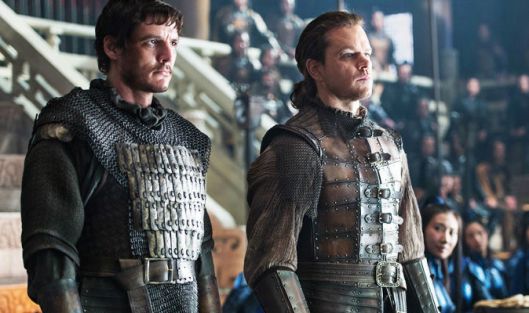 If after all this, you’re not convinced that The Great Wall has a really duff script then you’ll really have to see it for yourself. What was probably meant to be an effective melding of Western and Eastern movie making, or at the very least a Chinese tale adapted for a wider international audience, in the end becomes a collection of cinematic clichés, desultory character beats, and an ending that’s so rushed you get the feeling that maybe you’ve missed something (one minute the tunnel is discovered, the next, everyone’s climbing onto unstable hot-air balloons to reach Bianliang before the Tao Tei get there). It’s a movie that doesn’t seem to trust itself with any depth or nuance, as if audiences wouldn’t appreciate their inclusion. In its aim to be as entertaining as possible, it appears to have shed anything that might be thought-provoking, original, or ambitious.

During the movie’s production there was a lot of criticism surrounding Damon’s casting (as if no one realised this was an international co-production). Accusations of the movie using a white saviour narrative prevailed for a long while, and on watching the movie, it’s not hard to see why such accusations were made. Whether they’re well-founded or not will be down to the individual viewer, but as the Chinese have been fending off the Tao Tei for centuries, and only defeat them once Damon’s character turns up – well, you do the math. There’s also the inevitable attraction between Damon’s early medieval archer and Jing’s initially wary (but intrigued) commander. Their relationship remains entirely platonic throughout, with admiring glances appearing here and there, but the idea of an actual romance is firmly kept in its place. This may be an international co-production made for modern audiences, but let’s not get several centuries ahead of ourselves.

In the end, this is an American production that takes an ostensibly Chinese story (it was actually dreamed up by Legendary Entertainment CEO Thomas Tull and World War Z author Max Brooks), makes it on Chinese soil with a largely Chinese cast and crew, appropriates a Chinese national monument, and then jettisons anything that makes it truly, identifiably Chinese. (There’s also a corollary with World War Z as the Tao Tei climb up and over each other in their efforts to scale the Wall.) Should the Chinese feel insulted by this? That’s a difficult one to answer, their having been involved in this almost from the beginning, but if the white saviour narrative does apply then this is arguably one of  the most racially condescending movies made in a very long while.

But inevitably, with all the talent involved, there are some things that the movie gets right, it’s just that there aren’t enough of them to make up for when it goes wrong. The movie is often beautiful to look at, with a dazzling array of colours for the Chinese to wear and be seen against, and the overall production design by John Myhre is equally dazzling. The Wall’s defences are impressive too, with one unexpected, built-in feature proving particularly effective against the Tao Tei (though frustratingly it’s only used once). And one character’s death prompts a beautiful display of sky lanterns against the backdrop of the night sky. But as already mentioned, these aspects don’t make up for the clumsy, substance-free elements that are thrust centre-stage, from those awkward timescales, some truly awful dialogue, a subplot involving Dafoe’s captive mercenary and his plan to steal the black powder, and the inclusion of a young soldier who proves his bravery when everyone (except William) doubts him.

Rating: 4/10 – as dumb as dumb can be, The Great Wall is a terrible mis-step by Zhang, and by everyone else involved; big on spectacle but short on invention and lacking any internal logic, it’s a movie built out of nothing and unsurprisingly, is well on course to lose a lot of money for the studios who made it.