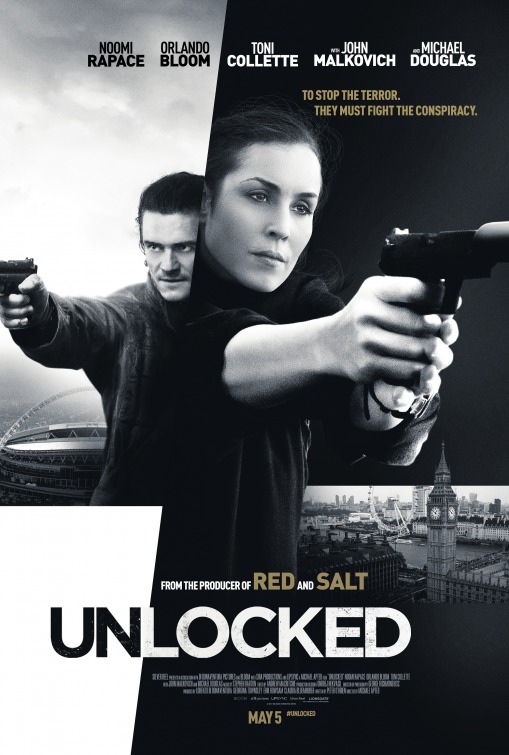 In 2008, Peter O’Brien’s script for Unlocked made it onto the Black List. In order to make it onto the Black List that year, a script had to receive a minimum of four “mentions”. These “mentions” were tabulated from the responses of around two hundred and fifty movie executives, each of whom had to nominate up to ten unproduced screenplays that were relevant to 2008. Unlocked received five mentions, and though that keeps it quite a ways down the list, the idea that it’s on the list in the first place gives the impression that the script has some merit, that if it were to be produced, and if it did make it to our screens, then it would be a worthwhile movie to watch.

Well, Unlocked has been produced (by seven collaborating production companies), it has made it to our screens, but it’s far from being a worthwhile movie to watch. It’s yet another generic, cliché-ridden action thriller where loyalties are betrayed every five minutes, where the hero (or in this case, the heroine) goes it alone to prove their innocence, where jumps in credibility and logic are allowed to happen without any thought as to how they might harm the narrative, and where Noomi Rapace continues to show why the role of Lisbeth Salander will always be the high point of her career. It’s a movie that starts off moderately well – Rapace’s interrogator is called on to interview the go-between for an imam who’s sympathetic to terrorism, and an associate looking to release a biological weapon in Central London – and which quickly abandons that early promise by failing to connect the dots in any menaningful way, and by offering Tired Thriller Set Up No 387 as the basis of the action.

Such is the tired nature of the whole endeavour, it shouldn’t come as any surprise that this is a movie that was shot over two years ago, and which makes it to our screens now purely as a mercy release, a way of allowing those seven production companies a chance to earn back their investments. And it’s yet another movie where the quality of the cast and crew should ensure some measure of critical acclaim, but despite everyone’s involvement, this fails to happen, and the measure of the movie can be found in Bloom’s risible performance, Apted’s uninterested direction, a principal villain who sticks out like a sore thumb, and the kind of twists and turns that we’ve all seen in other, sometimes much better movies.

It’s hard to explain from the finished product just why O’Brien’s script made the Black List. Maybe since then it’s suffered from a pronounced case of rewrite-itis, and any subtleties it once had have been removed. Whatever happened between then and now, none of it has helped Unlocked become anything more than a weary, lukewarm slice of hokum. Rapace plays her character with grim determination and little else, Collette adds another high-ranking spook to her resumé, Malkovich provides the humour (welcome but still out of place), and Douglas is Mr Exposition, a role it’s unlikely anyone could have made anything out of. It’s a disjointed mess, providing few thrills and laboured fight scenes, along with a misplaced sense of relevance (chemical weapons smuggled into Britain from Russia? Really?). Ultimately, once it’s seen, this is a movie that fades away at speed, and is soon forgotten.

Rating: 3/10 – a movie that struggles to make an impact, but when it does, does so in ways that induces groans instead of applause, Unlocked could be re-titled Unloved and it would mean absolutely no difference to anyone; with too many scenes that provoke laughter – and often not deliberately – this is yet another reminder that low-key, low-budget action movies deserve more care and attention than their makers are willing to provide.