A motley crew of tourists, some of whom are running to escape their past. A sightseeing trip to several of Holland’s windmills. A tour bus that breaks down close to a windmill that isn’t on any map. A woman (Beaumont) who witnesses the murder of one of the day trippers. A movie that treads such a familiar and uninspiring path that it might as well have been marked, Cliché Road.

The serial killer with a supernatural raison d’etre is such a staple now of the horror genre that any new wrinkle on such a well established theme has to really go the extra mile to be effective. Alas, The Windmill Massacre only has its location to help differentiate it from all the other serial killer horror movies out there. And when you can’t even come up with a coherent origin story for your supernatural killer – here it comes in two parts and the makers haven’t realised that they don’t make a convincing whole – then your movie is at a disadvantage before it’s even begun. 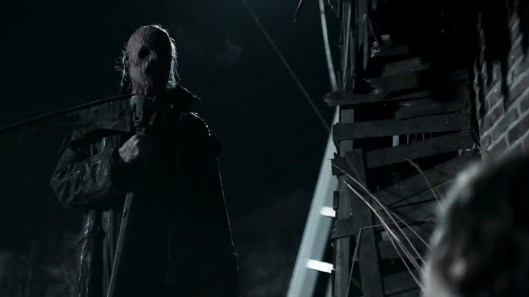 Having such a disparate set of characters doesn’t help either. There’s Beaumont’s Aussie nanny, on the run after killing her abusive father (Howard); Baladi’s uptight dad taking his haemophiliac son (Wright) on an impromptu term-time holiday; Taylor’s coke-snorting art historian; Ishida’s innocuous yet resourceful Japanese student; Hampton’s ambitious French photographer; and Batt’s Marine fleeing from an incident with a Dutch prostitute. They’re rounded off by tour guide Abe (Klever), whose attitude ranges from nonchalant to incredibly nonchalant. If the viewer manages to connect with any of them then that says more about the viewer, because all are stock characters who don’t inspire any sympathy.

To be fair the movie does attempt to provide a slightly different motive for its burn victim villain – he’s there to claim the lives of sinners – but in the end it doesn’t matter what his motivation is, as long as he rids the unlucky viewer of the characters’ company and in as timely a manner as possible. This leads to a series of deaths that attempt to pay homage to the kill sprees found in Eighties horror movies but which only manage to do so in a derivative, obligatory fashion; and there’s a twist that won’t surprise anyone. Some of the cast try too hard, some barely register, and director Nick Jongerius can’t inject enough energy into proceedings to make a difference. There are a couple of loose ends that aren’t tied up, but the average viewer won’t care, as long as they don’t have to make the same trip again.

Rating: 3/10 – yet another horror movie that creates a set of rules to govern its villain’s behavour and demise – and then ignores them all in order to set up a potential sequel, The Windmill Massacre is tiresome, and subordinate to ideas better used elsewhere; it just goes to show that low-budget European horror can be just as bad as its US cousin, and just as predictable.

A lonely backwoods road. A deputy dozing in a patrol car. A man who stumbles out of the woods covered in blood. A rush to the nearest hospital even though the man isn’t wounded.

And let’s stop right there. Whatever you might be looking for in watching The Void, be advised that a story which makes sense will not be forthcoming. From the outset, The Void is a movie that, thanks to writers and directors Jeremy Gillespie and Steven Kostanski, opts for keeping its audience (and its characters) firmly in the dark (or the void, if you prefer). It has no sense of its own internal logic – such as it is – and plays fast and loose with motivation, coherence, and dramatic licence. Stupid things are done by pretty much all the characters, and there’s enough lug-headed dialogue going around to crunch open a portal to another dimension – Oh, hang on a moment, that’s what’s happening here, isn’t it?

This is a movie that seems to have a strange kinship with The Fast and the Furious franchise (bear with this). In that series, each movie is constructed by coming up with the OTT setpieces first and the plot and storylines second. Here it seems as if the creature effects and their place in the screenplay were devised first of all, and then a plot bolted on later. That plot makes no sense, and whenever the movie seems like it’s going to explain exactly what’s going on it finds a way to avoid doing so. Even when the chief villain starts spouting pseudo-intellectual gibberish in his efforts to explain things it soon becomes obvious that he’s just spouting any old drivel that sounds esoteric. Somewhere in there is the notion that physical metamorphosis can be brought about through ritual and the intervention of beings older than time, but that’s the best the movie can do to justify the events that are taking place.

What can be discerned is that there is a cult operating in and around the kind of backwoods community where the local deputy is as much a doofus as he is a potential hero; that everyone in the hospital where the deputy and the man from the woods end up will die; that the creatures people “evolve” into will be low-lit and obscured by careful framing and ultra-careful editing; and that all this will happen in the kind of isolation that only occurs in low-budget horror movies. The movie trades on its retro-Eighties gore effects and sub-Lovecraftian tone but these can’t compensate for some truly awful performances (particularly from Poole), character motivations so dire they’re wince-inducing, and a number of plot “developments” that prompt the characters into putting their lives in danger over and over and over again. In many ways this is an ill considered project that lacks the zest and ideas needed to make it a breakout movie – which seems to have been the aim.

Rating: 3/10 – horror movies don’t have to make complete sense (though it would be nice if they tried), and The Void adheres to that idea with apparent relish; with no explanation offered for anything that happens, it’s a movie that tries hard to be effective on a visceral level but which ultimately fails to be anything more than yet another dumb horror that mistakes enthusiasm for quality.