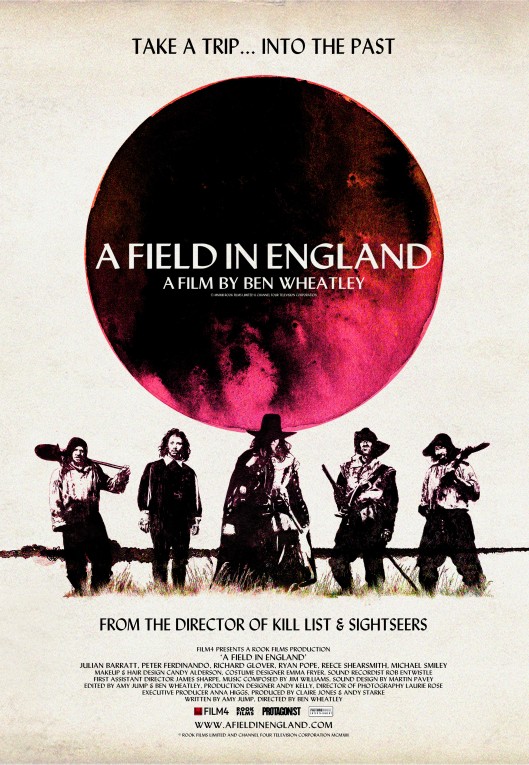 The British writer/director/editor Ben Wheatley has made six movies to date, all of which have been greeted warmly by critics, but less so by audiences. So what does this say about the movies Wheatley makes? Or the critics that review them so favourably? Or the audiences who aren’t as moved as the critics? Well, like any discerning director, Wheatley makes the movies he wants to make. He’s not singing or dancing to anyone else’s tune, and he’s never been just a director for hire. His movies are personal to him (and his co-writer/co-editor, and wife Amy Jump), and he brings his own unique visual aesthetic to them. Perhaps it’s this individuality of purpose that makes him so popular with the critics. But still, wider audiences haven’t taken to Wheatley’s movies, and he remains a movie maker with a great deal of critical caché but very little box office appeal.

Is this fair? Possibly not, but Wheatley’s distinctive approach to making movies isn’t always as welcoming as it could be. His fourth movie, A Field in England, is probably the best example of how his distinctive approach can get in the way of making a movie accessible, or even fundamentally appealing. Set during an English Civil War battle, the movie begins with Reece Shearsmith’s cowardly alchemist’s assistant, Whitehead, crashing through a hedge and cowering in fear from his pursuer, Commander Trower (Barratt). Rescued by a soldier named Cutler (Pope), the pair also encounter a couple of deserters, an alcoholic called Jacob (Ferdinando) and his witless companion, Friend (Glover). They decide to leave the battle and travel to an alehouse that Cutler tells them isn’t far away. They begin crossing a field that’s ringed by mushrooms, and Cutler forces Jacob and Friend to eat them. Things begin to a turn for the weird when the men seemingly haul an Irishman named O’Neill (Smiley) from out of the ground. He quickly assumes control of the group and convinces them that there is treasure buried in the field, and traumatises Whitehead into become a kind of human divining rod in order for them to know where to dig. 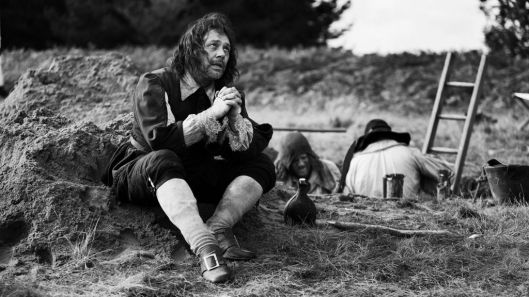 What follows is a series of events and episodes that may or may not be the result of the men ingesting the mushrooms, as hallucinations and psychotic breaks affect the whole group except for O’Neill (who may be real and then again he might not be; his provenance is doubtful). And this is the point where what occurs, and what follows, can’t be trusted. If you accept that Wheatley has sent his characters on a really strange trip, then you can go with the flow quite easily and just accept what you’re seeing without worrying about what it might all mean. But if you do need to know what it all means, then the rest of the movie is going to be problematic for you.

Wrongly or rightly, deliberately or accidentally, A Field in England is a movie that takes a huge stylistic and narrative gamble around the half hour mark and never looks back. It maintains a semblance of traditonal storytelling but filters it all through a succession of moments of bravura visual and sonic experimentation. At one point, while being chased by O’Neill, Whitehead shoves mushroom after mushroom into his mouth and Wheatley uses it as a cue to transport the viewer into Whitehead’s mind and expose them to the kaleidoscopic and fantastical visions that the character is experiencing. It’s a tremendous feat of editing, combining fractured and composite visuals with an overwhelming audio conflation of natural sound and music, and it’s far and away the standout moment… but, exceptional as it is, it’s also indicative of the way in which Wheatley and Jump have decided to treat the narrative, and the material as a whole. 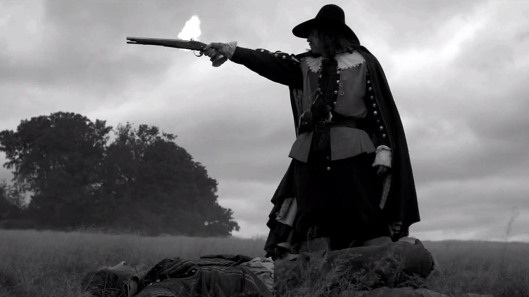 As the movie progresses, and the characters experience vision after hallucination after extended fever dream, it becomes clear that the story, such as it is, has been abandoned in favour of transporting the viewer into a world where anything Wheatley and Jump can come up with is the new norm, and regardless of whether it makes sense or not. What makes this all the more frustrating is that the dialogue and the characterisations, which were so redolent during the movie’s first half hour, are also abandoned, and the characters – literally – all become pawns to be moved around the field at random, and until Wheatley can set up the final showdown between Whitehead and O’Neill (which ends with a line from Whitehead that has Eighties action movie cliché written all over it; not bad for a movie set during the English Civil War). In the end, the viewer has no choice but to go along with what’s happening, because Wheatley isn’t giving them a choice; and if it doesn’t make sense – which a lot of it doesn’t – then it’s too bad.

But where the movie scores highly is in its imaginative cinematography, courtesy of DoP Laurie Rose (who has lensed all of Wheatley’s movies). The crisp, pin-sharp black and white images are hugely immersive, and close ups are rendered in such a precise, detailed fashion that there are several moments where the urge to pause the movie and savour the image is irresistible. It’s a movie that’s staggeringly beautiful at times, and if it’s ever released in a 4K UHD version it would be an even more incredible viewing experience. Full marks too to sound designer Martin Pavey and composer Jim Williams for combining their work in a way that adds so much resonance to the images, and helps accentuate the profoundly disturbed states of mind of the characters once their real “journey” has begun. Without these elements – the imagery and the soundtrack – A Field in England would definitely suffer further, but thankfully they more than make up for the errant narrative and directorial choices that Wheatley has made.

Rating: 6/10 – impressive visuals and an equally impressive soundscape aren’t enough to stop A Field in England from being a disappointing, and frustrating viewing experience; loaded with style and directorial flourishes, it neglects its storyline in favour of these approaches, and leaves the movie struggling to retain any meaning, which makes it an exercise in style that overwhelms any substance it may have had in the beginning. (1/31)