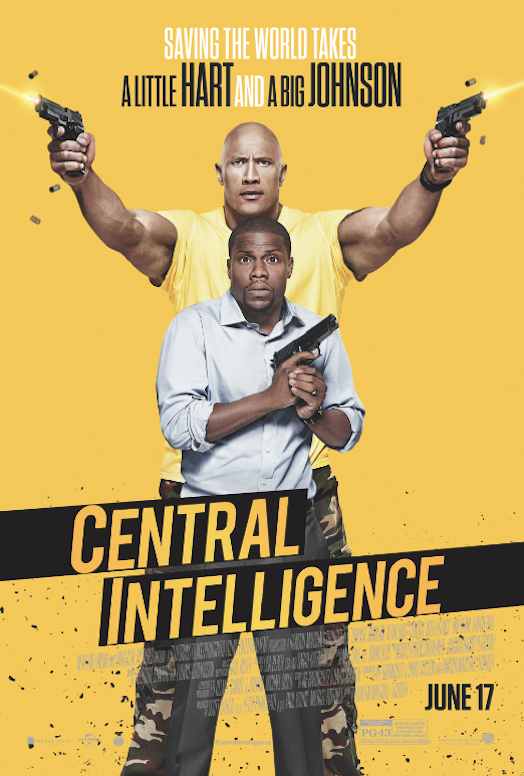 An action comedy that doesn’t take itself, or its raison d’etre, seriously, Central Intelligence is the kind of buddy movie that lives or dies depending on the chemistry between its two leads. It’s a relief then that the pairing of Dwayne Johnson and Kevin Hart – this decade’s answer to Arnold Schwarzenegger and Danny DeVito perhaps – works so well, and the pair are able to riff off on one another with an ease that belies the fact that this is their first movie together.

It all begins twenty years ago at a high school rally that sees put-upon fat kid Robbie Weirdicht grabbed from the school showers and sent sprawling across the floor of the gymnasium where everyone is gathered. While everyone else laughs, only Calvin Joyner, the most popular kid in school, helps Robbie to cover up. Robbie runs away and is never seen again. Fast forward twenty years and the class of 1996 is preparing to attend their high school reunion. Calvin (Hart) is now an accountant whose initial promise seems to have petered out: he’s just been passed up for promotion. He’s married to his childhood sweetheart, Maggie (Nicolet), but they don’t have any kids and she’s more successful than he is. Then, out of the blue, Calvin recieves a friend request on Facebook from someone called Bob Stone (Johnson). Stone persuades Calvin to meet him for a drink, and when they do, Calvin is amazed that Bob is actually Robbie, and that Robbie has changed so completely from the fat kid he remembers from school.

The pair end up back at Calvin’s home, where Bob asks him to look at his payroll account as there’s a problem with it. But the account is actually a list of bids for an unknown item at an auction due to finish the next night. Bob stays over, but the morning brings a surprise visit by the CIA in the form of Agent Harris (Ryan) and her fellow agents, Mitchell (Griffin) and Cooper (Smith). They’re after Bob who, it transpires, is a CIA agent who is apparently wanted for the theft of spy sateliite codes and the murder of his partner. Bob has left, however, and only catches up with Calvin later at his office. A firefight with the CIA ensues and the pair narrowly escape. Bob explains he’s trying to find the location where the codes will be bought, and needs Calvin’s accounting skills to help him do so. Calvin balks at the idea however, and takes off at the first opportunity.

Pressure from the CIA is brought to bear on Calvin and he’s forced to give up Bob’s whereabouts. But with Bob in custody and being interrogated “the hard way”, Calvin has a change of heart and helps him escape. They use another high school alumni, Trevor (Bateman), to help them find the location of the buy, and head off to Boston to crash the meeting, and discover just who the buyer is and if he’s a shadowy figure called the Black Badger, also the man responsible for the death of Bob’s partner, Phil (Paul)… 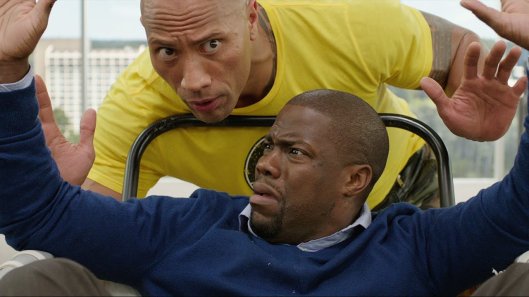 From the above synopsis you can guess that Central Intelligence doesn’t have exactly the greatest of scripts, but that wouldn’t be entirely true. Yes, it has several painful moments where the basic plot rebounds against the constraints of credibility, and the storyline surrounding Calvin and Maggie’s relationship takes the movie off into odd areas that slow the movie down and feel like padding, but overall it’s a movie that provides solid laughs, both visual (Bob’s dislocated finger) and verbal (“And you’re still shorter than my cat” – Trevor to Calvin). For once, Hart doesn’t overdo his usual schtick and delivers his best performance for a while, making Calvin’s eventual, committed, partnership with Bob more believable than expected. Meanwhile, Johnson reminds viewers just how good he can be in a comedy role, playing Bob as an over-exuberant man-child whose enthusiasm for pretty much everything is expressed through a variety of gushing excitement and childlike wonder.

Indeed, it’s the inspired pairing of Johnson and Hart that makes Central Intelligence work as well as it does. Unlike, say, Hart’s pairing with Ice Cube in the Ride Along movies, here he displays a genuine chemistry with the former WWE Superstar that makes watching the movie far more enjoyable than it appears at first glance. And while, as mentioned above, Hart employs his trademark cowardly, fast-talking movie persona on several occasions but perhaps in deference to Johnson’s cleverer, less in-your-face approach, refrains from going as over the top as he’s done in the likes of Get Hard (2015). This makes for one of his better performances, and in his scenes with Johnson you can see and feel him upping his game, something he hasn’t done since co-starring with Stallone and De Niro in Grudge Match (2013). 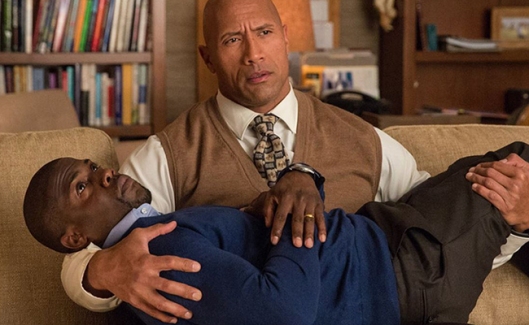 Without Johnson and Hart’s sterling performances, however, Central Intelligence would be even more derivative and lightweight than it looks, thanks to its piecemeal plotting, obvious villain, and low-key action sequences (they’re well choreographed but aren’t that memorable when all’s said and done). There’s an awkward subplot involving bullying that is resolved in typically inappropriate fashion, and the secondary characters are practically cardboard cutouts, leaving the likes of Ryan and Bateman little else to do but recite their lines and hope for the best once the movie’s cut together. Thurber, whose last movie was the wickedly smart and under-appreciated We’re the Millers (2013) makes light work of a screenplay that could have been filed under “fluffy nonsense” and no one would have complained, and shows an aptitude for the buddy movie – and showing these characters in a good light in particular – that hopefully will keep him retained if a sequel is ever greenlit (which is likely).

Rating: 6/10 – there’s plenty of silly fun to be had in Central Intelligence, but while it’s amusing enough, it doesn’t excuse the waywardness or clumsiness of the script; Hart and Johnson make a great double act (though Johnson proves to be the better comic actor), and there’s enough merit to the action scenes to keep genre fans happy, all of which adds up to a surprisingly entertaining viewing experience – if you don’t expect too much.