aka Behind the Wall

Fritz Lang fled Germany in 1933 following a meeting with Josef Goebbels where Lang was offered a position as the head of the German movie studio, UFA. Up until that point he had made sixteen movies – seventeen if you include the French version of The Testament of Dr. Mabuse (1933) – and he was the most successful German director of the Twenties and early Thirties, both critically and commercially. He made movies that were beautiful examples of the Expressionist movement, and he introduced many future staples of sci-fi cinema such as the countdown to lift-off (Ten, nine, etc.) which was first seen in Woman in the Moon (1929). Destiny was the second movie he made with his wife, the actress Thea von Harbou, and their collaboration helped Lang display a better understanding of women than he’d shown previously, making this movie more relatable for female audiences as a result.

A young couple (Dagover, Janssen) arrive at a village where Death (Goetze) is in the process of erecting a great wall around the land he has purchased. While they spend time in the tavern, the girl is distracted and her lover disappears. Later, while she weeps by the wall, she sees a ghostly procession of souls pass through the wall, and the last of them is her lover. She exhorts Death to release him to her but instead he leads her into a dark room and shows her three candles, all lit, but each at a different stage of burning. Death tells her that each candle represents a life. If the girl can save just one of these lives then Death will restore her lover to life. The girl agrees to Death’s wager, and finds herself in a Middle Eastern city during Ramadan. Now a princess, Zobeide, she has to secure the life of her lover, the Frank (Janssen), but she fails in the attempt and he is killed. 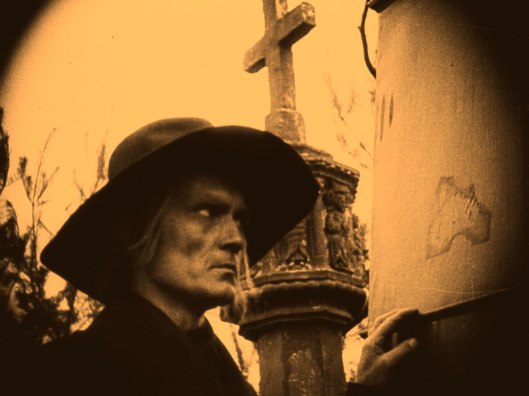 Next, the girl finds herself in Venice as a noblewoman, Monna. She too has to protect the life of her lover, Gianfrancesco (Janssen), from the murderous intentions of her fiancé, Girolamo (Klein-Rogge). In this she fails again, and next the girl finds herself in China as a magician’s assistant, Tiao Tsien. The magician has another assistant, Liang (Janssen), who is Tiao Tsien’s lover. When the Emperor of China (Huszár) tries to seduce her she rejects him, and attempts to flee the palace with Liang. But Liang is killed and the girl has to face Death knowing that she has failed his challenge. But Death gives her one last chance: if she can persuade someone from the village to trade their life for hers, then the lovers will be reunited. Of course, she accepts, but will she be able to persuade anyone to make such a sacrifice?

For a movie that contains three sections that might be regarded as fantasies, Destiny’s framing storyline exists in a dream all by itself. Taking place “in some time and some place”, Lang invites us to follow his two young lovers as they arrive in a picturesque little village, unaware of the fate that awaits them. Even the appearance of the mysterious hitchhiker can’t dampen their enjoyment of life and love. But Lang has other plans for them, and soon happiness is replaced by grief and the lovers’ dream-like reality becomes a nightmare. Lang was always fascinated by the idea of Death as a spectral, other-worldly figure, and the character appears in a number of his movies, but this was the first time Lang brought him to the screen. Goetze’s gaunt features and fixed stare are a disturbing, unnerving sight, and the actor imbues the character with an impassive, worrying stillness, as if he’s always waiting for that next victim of “God’s will” – and it could be anyone. Lang makes Death an implacable, emotionless adversary for Lil Dagover’s heartsick protagonist, and the contrast between their acting styles adds a fine juxtaposition to their relationship in the movie.

The opening section, with its idyllic setting and array of “colourful” village stereotypes, seems very like Lang attempting to wrong foot the audience. But Death’s presence is an augur that all isn’t as it seems, and the wall he erects around the land he’s purchased gives rise to that. But the young lovers remain unaware of the darker forces around them, until it’s too late, and Dagover is pleading for mercy for the life of her paramour. Happiness, Lang seems to be saying, is fleeting and can’t be relied upon. But if you want it badly enough, you’ll do whatever you can to keep hold of it. And so, Dagover’s chastened young woman must endure a series of travails that the audience can see will be doomed to failure, but which she must put her heart and soul into. There’s a phrase, Love Conquers All, but for most of the movie, Lang seems to be saying, Don’t you believe it. It’s this overtly pessimistic point of view that drives the movie forward, as each new scenario sees love thwarted at every turn, and Dagover’s determined character suffers more and more.

The three scenarios that the young woman becomes involved in all have an element of the fantastical about them, and depict a romantic idealism that reflects the feelings of the young lovers. Unavoidable fate and tragedy are the outcome of each tale, and Lang is resolute in denying the young woman any joy during these episodes. But the art direction – by Robert Herlth, Walter Röhrig, and Hermann Warm – along with Heinrich Umlauff’s striking costume designs – is a joy. Silent movies in 1921 were rarely charged with such expressive and impressive imagery, and it’s equally rare for a silent movie of the period to overcome the impression of appearing fake or overly theatrical (though Dagover does do histrionic with gleeful abandon from time to time). Lang was a master when it came to the visual styling of his movies, and Destiny doesn’t disappoint in this area. Allied to a script that deftly explores notions of love as an immutable force, and the will to endure for love, it features good performances from its cast, and strong, passionate direction from Lang.

Rating: 8/10 – a tight, purposeful script allows Lang to expand and build on the promise of his career up until that point, and he shows that there are no lessons wasted or ignored in his tale of love under threat; emotionally redolent and deceptively poignant in places, Destiny is a terrific example of a director finding his “groove” and having found it, never looking back. (10/31)