When actors make the transition from appearing in front of the cameras to working behind them as directors, their first attempts at building a secondary career have a tendency to be remarkable debuts. Think Charles Laughton and The Night of the Hunter (1955), or Kevin Costner and Dances With Wolves (1990), or Sarah Polley and Away from Her (2006) (just to name a few). Well, you can add Philip Seymour Hoffman and Jack Goes Boating to the list. A movie that clearly shows that Hoffman could have had an equally lustrous career as a director as well as an actor (this was his only outing as a director), Jack Goes Boating sees him deftly handling comedy, drama, and romance in his screen version of the play by Robert Glaudini. It’s an unsurprising choice as Hoffman, along with Ortiz and Rubin-Vega, appeared in the original Off-Broadway production in 2007. The main cast’s familiarity with the material – similar to that with Fences (2016) – helps tremendously, but Hoffman is astute enough to transpose the action so that at no point does it feel stage-y or contrived.

The movie is terrifically understated from the start, with Hoffman’s shy, reticent Jack working as a limo driver for his uncle. He works with his best friend, Clyde (Ortiz), and the two have an easy going relationship that is affectionate and endearing. Clyde is married to Lucy (Rubin-Vega), but their relationship is on rocky ground, though they both help set up Jack with one of Lucy’s co-workers, Connie (Ryan). Connie is similar to Jack in that she’s shy and diffident; she also has some intimacy issues. Their first meeting goes well, and by the end of it they’re talking about doing something during the summer, such as boating. Neither of them have done anything like this before, and Jack is especially worried as he can’t swim. Clyde agrees to teach him, and in the process, Jack learns about positive visualisation, which helps him have the confidence to overcome his fears. 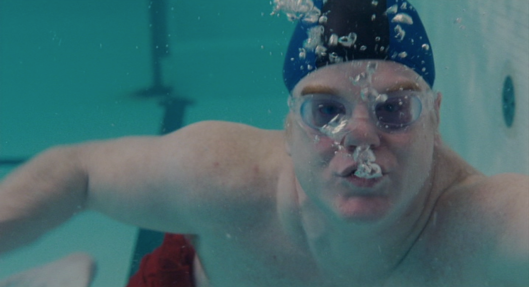 An incident involving Connie leads to Jack agreeing to make dinner for her, something nobody – aside from her mother – has ever done before. Clyde helps out again by giving Jack the name of a chef nicknamed The Cannoli (Inzerillo), who’ll show him how to cook a meal. But there’s more to The Cannoli than Jack is initially aware of, and as the night of the meal for Connie draws nearer, Jack learns more about his friends’ marriage than he was ever prepared for, while his own relationship with Connie grows stronger. On the night of the meal, the various stresses and strains affecting Clyde and Lucy come to the fore, and the evening descends into chaos, one that has repercussions for Clyde and Lucy, and has a profound effect on Jack and Connie…

What’s immediately apparent from Jack Goes Boating is the surety that Hoffman shows in guiding the material from its opening scenes where the script’s dry humour is given room to breathe, through the middle section where Jack and Connie’s romance takes centre stage, and then on into the final stretch where it becomes a stinging drama. Hoffman handles each stage of the movie with due care and attention to the characters and, more importantly, their inner lives. As a director, Hoffman is incredibly generous to his cast, giving them the room to explore their roles and instill them with small details that enhance both their performances and the movie at the same time. What this means for the viewer is a movie that delights and captivates in equal measure, and has the ability to leave said viewer wearing a happy grin for most of the movie. Hoffman and Ryan in particular do more with a look and a glance than some actors can do with a four-hour movie and two hundred pages of expository dialogue. 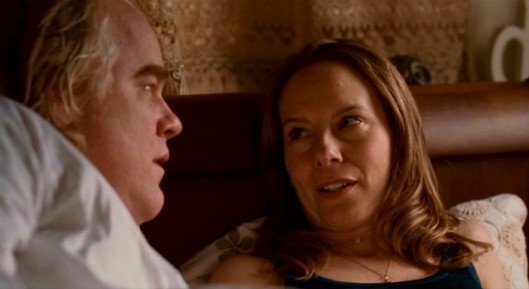 The romance between Jack and Connie is handled with a great deal of finesse, as the pair gingerly and carefully get to know each other, and try to overcome their lack of confidence in being part of a couple. Opening up to each other and trusting each other, the pair behave in a winsome manner that sees them warily circling around the idea of being together while at the same time, being eager to move forward as quickly as possible – as long as they’re both okay with that. In contrast, Clyde and Lucy are at the kind of loggerhead where intimacy is painful and recriminations for past misdeeds are just a breath away. Clyde grows to be jealous of his best friend’s good fortune in finding Connie, and his unhappiness threatens to ruin the meal. Lucy too is unhappy, and like Clyde, is dealing with her feelings in a way that’s detrimental to the possibility of their staying together. Lucy’s unhappiness also threatens to ruin the meal, and when things do begin to unravel, it’s Lucy whose anger finds its full expression in an excoriating attack on Clyde. As the warring couple, Ortiz and Rubin-Vega give outstanding performances, each imbuing their character with a potent mix of pained acceptance (that things are unalterably wrong between them), and a desperate need to wipe the slate clean (which they’ve tried and failed to achieve).

While there’s little here that’s new or hasn’t been covered before – Marty (1955) is an obvious forerunner – it’s the way in which Hoffman and his very talented cast handle the material that makes Jack Goes Boating so emotionally vivid and deceptively compelling. Jack and Connie are characters you can’t help but like, and you can’t help but root for them all the way through. And though they’re at odds with each other, Hoffman ensures that Clyde and Lucy deserve our sympathy as well. It’s all supplemented by a wonderfully expressive soundtrack that mixes an often poignant score by Grizzly Bear, and a handful of Fleet Foxes songs that contribute greatly to the movie’s overall tone and mood.

Rating: 9/10 – Hoffman’s death in 2014 robbed us of an inspired actor and director, and after viewing Jack Goes Boating, that sense of loss is more keenly felt than ever; beautifully observed and endlessly affecting, the movie is funny, romantic, tragic, and a terrific showcase for all concerned. (11/31)