Inevitability. In the world of franchise horror, the word is a touchstone for movie makers everywhere. Where there is one horror movie that’s been successful (even moderately so), chances are that someone will come along and make another. And another. And another, until the law of diminishing returns – financial, not artistic – brings an end to the whole terrible enterprise. For a while.

The latest franchise entry to be foisted on us without any kind of encouragement from fans, interested third parties, previous investors, or the terminally bewildered, Rings is a redundant exercise in supernatural nonsense that outstays its welcome right from the very start. Set on a plane, the opening scene plays out like a game of tag as first one passenger then another, and then another, reveals that they’ve all watched the dreaded videotape featuring Samara. It’s seven days on for all of them – just what are the odds? – and there’s nowhere for them to go: the plane’s in the air and the video screens are all working. And sure enough, heeeeeere’s Samara! Inevitably (there’s that word again), the plane crashes, killing everyone aboard. But has the cycle been broken? 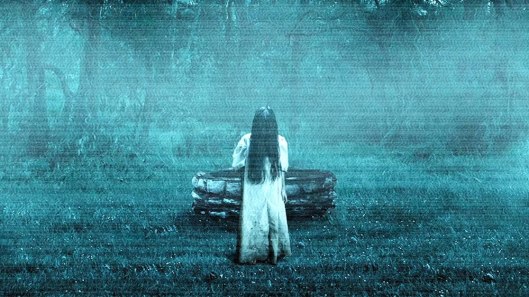 Fast forward two years and the answer is an obvious, of course not. A college professor called Gabriel (Galecki) buys a battered old VCR at a garage sale and inevitably it contains a copy of the cursed videotape (just how many copies of this videotape were made?). Inevitably, Gabriel watches it. We’re then side-tracked into the lives of generic teen lovebirds, Julia (Lutz) and Holt (Roe) just as Holt is about to go off to college (guess who’s a professor there?). When Holt stops returning her calls and texts, and she receives a mysterious call from a girl called Skye (Teegarden) asking after Holt’s whereabouts, Julia drops everything and heads to Holt’s college. Soon, she’s met Skye and Gabriel, been introduced to “The Sevens”, a group of students involved in an experiment of Gabriel’s devising that involves Samara’s videotape, and been a passive witness to Skye’s demise. She learns that Holt has watched the tape and has twelve hours left before Samara kills him. Julia watches it too, but when she gets the call to tell her she has “seven days”, the phone burns a mark into her palm, and she has a vision of a door.

All this sets up a road trip to the town of Sacrament Valley, and an investigation into the whereabouts of Samara’s remains (Julia and Holt believe that by cremating her remains, Samara’s curse will be lifted). Soon they’re breaking into tombs, visiting a blind man named Burke (D’Onofrio) who knows some of Samara’s history in the town, and discovering hidden rooms below the church. There’s danger, more danger, continued supernatural threat, death, injury, more death, and a sequel-baiting ending that wants to have its Samara-shaped cake and eat it as well. Does it make any sense? On a convoluted, I-can’t-believe-it’s-not-simpler level, no, it doesn’t, and mainly because Samara’s influence is allowed to have an effect beyond the videotape and her murderous follow-up courtesy call seven days later. This allows for the deaths of two characters that are at odds with the basic set up, and an ending that makes no sense because it undermines the admittedly skewed logic created from the start, and the greater mythology of the franchise as a whole – as anyone who remembers the end of The Ring Two (2005) should be able to attest.

So what we have here is a belated series’ revival that should be filed under “cash-in”, or “uninspired knock-off”. It tries to reinvent the wheel in terms of Samara’s origins in an attempt to provide viewers with something different from previous outings, but in doing so, becomes laboured and unaccountably dull. Much of the time spent in Sacrament Valley plods along at a pace that defies audience involvement, and with each new plot “development” the sounds of heads being scratched and confused sighs being released act as a measure of just how stale the script has become. Said script has been cobbled together by David Loucka, Jacob Estes, and Akiva Goldsman (what with this and The Dark Tower, Goldsman isn’t exactly having a banner year – and that’s without his story credit for Transformers: The Last Knight). With its bland central duo, reflexive storyline and make-it-up-as-you-go-along plotting, Rings is a horror movie that aims to be as creepy as its forebears, but then forgets that the old trick of having Samara emerging from a TV has lost much of its original impact. The troubled teen spirit is old hat now, a horror icon who no longer possesses the power to frighten audiences, except in relation to how living in a well isn’t too good for the complexion.

At the helm of all this is Gutiérrez, a director whose last stint behind the camera was in 2008. There are certain moments and scenes where it’s clear he’s opted for a generic approach to the material, but what’s unclear is whether this was due to budgetary constraints or creative decision-making. But what it does is to make the movie drag for much of its latter half, which in conjunction with the script’s grinding to a dramatic halt, leaves the viewer stranded waiting for the movie to become interesting again. But neither the script nor Gutiérrez can overcome the lack of original ideas being put forward, and much as he might try, Gutiérrez lacks the wherewithal to inject a much needed spark into proceedings. The performances are perfunctory and lack depth (which is perhaps inevitable given the material), and the cinematography relies too heavily on scenes being lit as if exploring the wider edges of the frame wasn’t required, or important. Even the movie’s few jump scares are tired approximations of previous jump scares. With so much that’s ineffective and mundane, the only thing the viewer can hope for is that, despite its success at the box office, this is one sequel-cum-reboot that puts off anyone revisiting the curse of Samara anytime soon.

Rating: 4/10 – stereotypical even by horror franchise standards, and lacking a perceptible style all its own, Rings adds nothing of value to the series, instead settling for telling the kind of melodramatic detective story that has been done to death dozens of times before; a movie then that serves only to reinforce just how the franchise has deteriorated since the heady days of Hideo Nakata’s 1998 original.