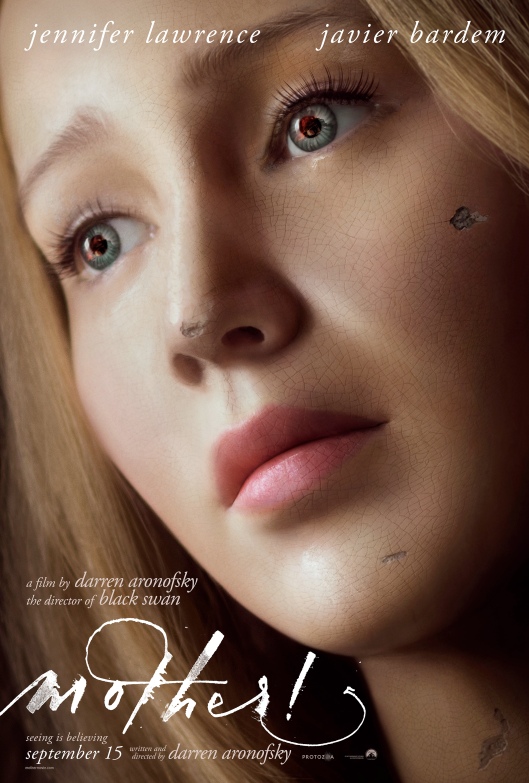 Tucked away near the bottom left hand corner of the poster for mother! is the tagline, seeing is believing. Like much of the movie itself, it’s a phrase that’s open to interpretation, while at the same time, it can also be dismissed quite readily. If what we’re seeing is to be believed, then principal production company Protozoa Pictures have handed writer/director Darren Aronofsky $30 million in order for him to go off and make a movie that reaches for great heights but which fails to achieve those heights because somewhere along the way – and apologies for the clumsy analogy – Aronofsky forgot to bring along the ladder that would allow him to get there. It’s a brave, fearless movie, reckless even, and one that challenges its audience on many levels, not least as to whether or not they’ll like it. But it’s not the great success that some critics are avowing, and it’s not the complete disaster that others are saying of it. Instead it’s a movie that reveals a truth about artistic vision that often gets overlooked: it’s the vision of one individual, and as such, isn’t likely to be shared or appreciated by everyone.

For the most part, mother! is a religious allegory, with the main characters – mother (Lawrence), Him (Bardem), Man (Harris), and Woman (Pfeiffer) – recycling moments from the Old Testament that trade on our familiarity with them in order to help the viewer process the world they’ve been thrust into. The house where mother and Him live is a veritable Garden of Eden; beyond it is blasted ground and decaying flora. It’s an oasis that mother wants to perpetuate, and while Him is having trouble writing (he’s known also as the Poet), mother busies herself in renovating the large, spacious house they live in. But into every paradise must come discord, and soon the arrival of man, someone who appears to know Him (though how is never decided on), leads to the beginning of a great unhappiness for mother, as Him puts their guest before both Himself and mother. mother can’t understand it, and her attempts to return things to how they were before man’s arrival, all of which are unsuccessful, are further overturned by the arrival of man’s wife, woman. 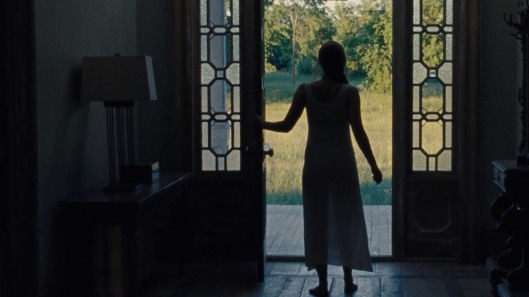 If you know your Old Testament then you’ll know that the further arrival of their two sons, known as younger brother (Brian Gleeson) and oldest son (Domhnall Gleeson), will lead predictably to the movie’s first outbreak of violence. The wake that follows sees the guests take advantage of Him’s hospitality, but while Him isn’t bothered by it all, mother becomes more and more angry and annoyed, and eventually throws them all out. mother confronts Him about his willingness to embrace the love he’s shown by others, while in turn he ignores the love she has for him. Her anger sparks passion in Him and they have sex; the next morning, mother announces she’s pregnant. At that, Him’s writing block vanishes and he sets to work again with renewed vigour and enthusiasm. Time passes (though perhaps not in the same fashion as we are aware of it). mother is heavily pregnant, and Him has finished writing his first poem. mother takes steps to celebrate their good fortune, but the arrival of fans of the Poet at the house soon makes the events of the wake seem trivial in comparison…

Written (apparently) in five days, mother! sets out its stall quite early on, and builds from an intimate character piece to a cautionary tale, and finally, to a riotous excursion into the apocalypse. For all the religious allegory that litters and upholds the screenplay, as well as its occasional forays into the consequences of much sought after celebrity, when it’s brought fully into play it lacks any subtlety, and Aronofsky seems determined to batter his audience over the head with the intensity of it all. An extended sequence that sees mother battling for her home and her life provides little respite as the director of the much more polished Black Swan (2010) gives us a potted history of the world and its fall from grace, and its adoption of original sin as a mission statement for pursuing life (or should that be death?). It’s a heavy-handed though technically stunning section of the movie, but it also proves numbing, as violence is meted out at every turn and each atrocity depicted has less and less effect on the viewer. There may be a point being made here about the way in which we’ve become inured or desensitised to violence, but if there is it’s buried beneath Aronofsky’s bludgeoning approach and the combination of Matthew Libatique’s careering cinematography and Andrew Weisblum’s frenetic editing.

Whatever message Aronofsky might be trying to get across, what hampers the movie most in enabling that message to be received by audiences, is the singular lack of sympathy or empathy that the viewer could have for any of the characters. mother may seem like the most obvious choice for the viewer to connect with – after all, the camera follows her around capturing close ups of her for most of the movie – but for the most part it’s a passive role that requires Lawrence to react rather than participate, and she’s forced to shuttle through a variety of expressions that range from unpleasantly surprised to easily confused and back again. It’s a good performance from Lawrence, but somehow it’s against the odds, as if Aronofsky was more concerned with the physical surroundings of his characters – the house is like a maze of unconnected rooms and dislocated floors – rather than any interior life they might have. Bardem is equally good and in the same fashion, making two good performances that help make the movie more accessible than perhaps Aronofsky was prepared to agree to.

In the end, mother! is a movie that is likely to prove divisive for some time to come. Some will like it immensely, others will be repulsed by it (and especially by a scene that has a less literal parallel in real life). It would be wrong to claim it as a masterpiece, as there are long stretches where the pace is becalmed, and mother’s persistent inability to control what’s happening around her soon becomes increasingly frustrating to watch. It would also be wrong to claim it as a catastrophe as it’s a movie that’s striving to be ambitious on its own terms, and in that sense it is successful; it’s unlikely you’ll see another movie this year that is so uncompromising and unapologetic in the way it’s being presented. On balance then, there’s more that’s good about the movie than bad, though it’s a narrow margin that separates the two. But whatever anyone may think about its successes or failings, this is bold, visionary storytelling from a director who has made a movie that is both experimental and formal in its design, and thought-provoking for much of its demanding running time.

Rating: 6/10 – a movie that may well develop a better reputation in years to come, mother! is a frustrating, relentless, impressive, and yet reproachful assault on the senses; emotionally oblique and intellectually compromised it may be, but this is still a visually and aesthetically astounding feature that flirts with the kind of regressive ideas that other movie makers wouldn’t even begin to contemplate taking on.