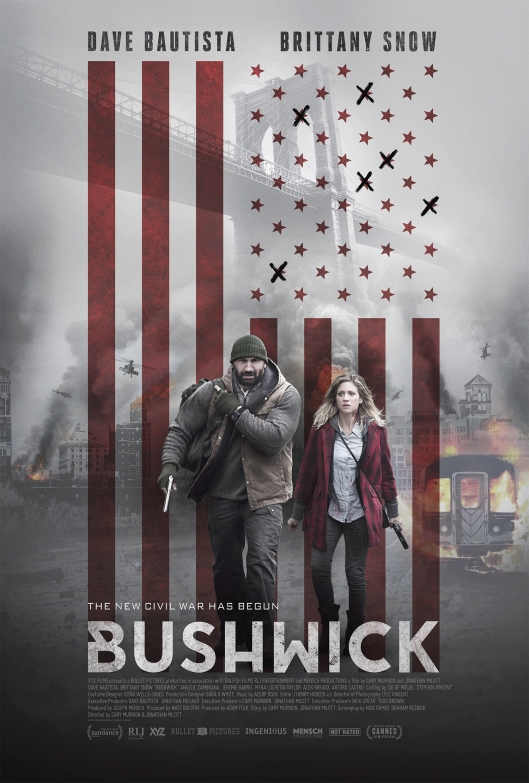 Bushwick asks the question, what would a modern day US Civil War be like? The answer is a lot like The Purge (2013), abut without that movie’s intended freakshow aesthetic or its extreme fantasy elements. Here, everybody is fair game, but not just for one night. Here, secessionists go from door to door shooting everyone on sight, and the local residents of Bushwick fight back as best they can, and without really knowing why it’s all happening. What should have been an easy takeover of the US political system has become a guerrilla-led fight to the death. But is this a fight to maintain the status quo, or is it just because you shouldn’t mess with Bushwick?

The straightforward answer is, you shouldn’t mess with Bushwick. This is shown by the way in which Lucy (Snow) transforms from being a scared college student into a gutsy, gun-toting leader of others, solving problems and taking charge and kicking ass when necessary. She’s from the area, and when we first meet her she’s just trying to get home accompanied by her boyfriend, Jose (Castro). Getting off the subway they find it’s deserted except for a man who runs through the station screaming because he’s on fire. Adopting a “let’s-not-get-involved” stance, Lucy decides it would be better if they just headed to her parents’ house. As they ascend the steps out of the subway station though, they soon become aware that something wrong is going on, a fact that’s confirmed when Jose goes to see what’s happening and is promptly killed in an explosion. Lucy tries to find her way to her grandmother’s house, but along the way she witnesses a murder and is chased into a basement dwelling by the killer and his accomplice. It’s there that she meets Stupe (Bautista), who saves her from the two men.

By the time night has fallen, and the pair have had more than their fair share of shootouts, near misses, murderous encounters, disappointments, and injuries – Stupe suffers a nasty leg wound that needs to be cauterised, Lucy loses half a finger (“Oh my God. Oh my God. What am I going to do when I get married?”) – Lucy and Stupe have switched roles, and she displays a confidence and a determination that she didn’t have when they first met. Lucy learns to survive, and to keep others around her alive, and though the experience of being thrust into the midst of a bona fide Civil War is immediately frightening, she steps up and starts to make a difference. Lucy is exactly the kind of person we’d all like to think we would be if we were in the same situation, but probably wouldn’t be (run and hide until it’s all over? Now that sounds like a plan). Watching her character arc play out over the course of the movie is one of the best things about it, and Snow portrays Lucy as credibly and persuasively as you could expect, and for the viewer, she’s someone to admire and respect.

Snow is matched by an equally intuitive and convincing performance by Bautista as an ex-US Army medic turned janitor who has a tragic back story. His is a more contained portrayal, but combined with Snow’s more emotionally expressive performance, the difference in their characters’ respective temperaments allows their growing friendship and reliance on each other to blossom naturally and without feeling forced. The script – by Nick Damici and Graham Reznick – keeps the duo at the forefront of the action, and despite a couple of occasions where plot developments stretch the movie’s otherwise carefully constructed plausibility (Lucy’s encounter with a priest is particularly jarring), following their progress to safety is handled extremely well by both the script and directing team Murnion and Milott.

Indeed it’s the way in which Murnion and Milott – making their second feature together after Cooties (2014) – handle the material that makes the movie so effective. Adopting a Steadicam approach to the photography that provides a sense of immediacy, the duo also keep much of what is happening around Stupe and Lucy at the edge of the frame or just outside it. It all adds to the sense that despite their being careful, that something could happen to them at any moment. This feeling of jeopardy is maintained throughout, and the script’s investment in them as recognisable characters adds a further sense of uncertainty that increases the tension. The directing duo also elicit good performances from the supporting cast, and with the aid of sound mixer Richard Hart and supervising sound editor Rich Bologna, they’ve constructed an aural landscape for the movie that ensures there is always something going on in the background or just out of sight (except for when Stupe reveals his tragic back story).

Wisely perhaps, the movie doesn’t attempt to provide much more of a political statement regarding its Civil War backdrop other than the secessionists having a misguided sense of patriotism, but in doing so (and you could argue this may be deliberate) a parallel can be drawn with the recent upsurge of sentiments in the US around Making America Great Again. If this is a deliberate ploy by the makers to pass comment on what could happen as a result of parts of the US electorate deciding they want to have their own government, then the movie does have an eerie prescience about it, despite common sense saying this won’t ever happen. But then, whoever thought that an actor would become President, or a black man, or a businessman who’d end up keeping Alec Baldwin in continuous work for at least four years? A good movie overall, Bushwick has more going on behind the gunfire and the street-level anarchy than is at first apparent, and this adds to its considerable effectiveness.

Rating: 7/10 – a solid, well thought out thriller with modest ambitions, most of which it achieves, Bushwick is engrossing for the most part and not always as predictable as it sounds; with very good performances from Bautista and Snow, and fine attention to detail, it’s marred only by a generic urban soundtrack by Aesop Rock, and an ending that disappoints thanks the movie’s need to be edgy and dark at a point where it doesn’t need to be at all.