Number seven in a franchise that’s proving as hard to keep down as the titular character itself, Cult of Chucky is the latest instalment in a series that at least has tried to do something different with each entry. However, while this has its moments, it’s not as good as Child’s Play (1988), or its predecessor, Curse of Chucky (2013), but instead, occupies the largely stagnant middle ground of the rest of the series. Fans will no doubt love it, while non-fans will spend much of their time trying to work out who all the returning characters are. It’s very much a movie that’s been made to satisfy the fans, but if so, then it has to be argued that said fans are pretty undemanding.

It’s a movie that throws the viewer in at the deep end right from the start, and assumes that they’ll know exactly what’s going on, why, and who it’s happening to. It’s a continuation of the story that began in Curse of Chucky, but here the story is presented in a much more straightforward way that doesn’t try to connect itself with the events and characters of earlier entries as Curse did. But what it does do, as so many of the other entries have done, is to cut narrative corners whenever it’s convenient to do so. This means the movie is disjointed, takes liberties with its own continuity, and poses questions it has no intention of answering. For fans of horror franchises, a lot of this will be familiar territory, but as this is another entry written and directed by series’ keeper of the flame, Don Mancini, it’s all the more disappointing.

Set largely in a medium security mental institution, the movie focuses on Nica Pierce (Fiona Dourif), who was framed by Chucky (Brad Dourif) for the murders of her family in the last movie. Four years have passed, and her therapist, Dr Foley (Therriault), has managed to persuade Nica that she murdered her family, and that attributing their murders to Chucky has been a way of dealing with the guilt of what she “did”. But it’s not long before Chucky’s presence begins to make itself felt, first by one of the other patients, Angela (Kerr), telling Nica she’s spoken to Chucky and he’s coming for her, and then by Dr Foley bringing a talking Chucky doll into a group therapy session. A vsit by Tiffany Valentine (Tilly) sees Nica given another talking Chucky doll as a gift, and so, the stage is set for Chucky to go on yet another murderous rampage.

Having toned down the humour that marred Bride of Chucky (1998) and Seed of Chucky (2004), and reconnected with the strengths of the first movie, Mancini seems to be bogged down by what looks and feels like a transition movie, or that difficult second movie in a trilogy. It certainly leaves several plot strands dangling, and then right at the death (so to speak) it springs a surprise that has to be addressed/followed up in the next instalment (it’s one of those moments that will have fans punching the air in delight, while baffling the average viewer). Despite Mancini’s best efforts, the movie plays out with a grim determination to provide just enough death and franchise maintenance to keep people interested until next time, when perhaps, there’ll be a better payoff. And at least this time, the makers have foregone the low budget CGI employed on the last couple of entries, and returned to the animatronic and puppetry effects that have been used so well in the past. Chucky still moves like he’s got rickets, or is in need of a hip replacement, but it’s in keeping with how a plastic doll without functioning knees or ankles would move if it really was alive. 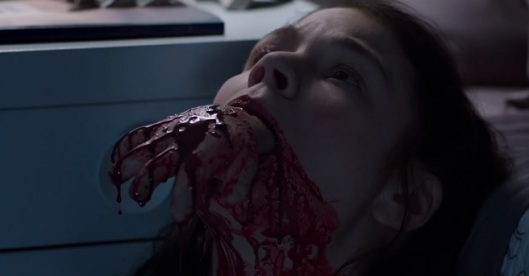 Fortunately though, and amidst all the pedestrian plotting and characterisations, Mancini manages to pull off a number of masterful moments that elevate the material, if only briefly. There are several establishing shots of the interior of the mental institution that show off its sharp lines and white open spaces, and there’s a character reveal that is both unexpected and effective purely because there’s no previous set up for it. There’s the puzzle of why one Chucky doll has a brutal fringe, and best of all, a death scene involving a skylight that Mancini shoots first with an eye for its initial static beauty, and then with an eye for its devastating, bloody outcome. These help the movie haul itself out of the doldrums it finds itself in at times, and gives some hope that if Mancini has already got number eight mapped out in his head, that it will contain moments as good as these, and perhaps a lot more besides.

Another bonus is the presence of the Dourifs, with Brad providing more solid voice work as Chucky, and daughter Fiona back in the fray as Nica. Fiona isn’t always best served by the script, but she has a similar intensity to her father that keeps the character more credible than most. As the movie progresses – and this may have been deliberate on Mancini’s part – Fiona looks more and more like her father, so much so that in a scene where she’s being hypnotised by Dr Foley and a light flashes in front of her, her features alternate between her own and what could have been her father’s super-imposed on hers, though that’s clearly not the case. It’s an odd, somewhat disturbing moment, and the feeling persists from that moment on. If it is deliberate, then it’s a clever trick considering where the movie ends up. Along the way though, Mancini plays to genre conventions for the most part, and keeps the movie from looking or feeling too fresh (the setting is yet another hospital where only the same three members of staff are on duty at any one time; otherwise it’s deserted). Held back perhaps by budgetary restrictions, the movie is nevertheless one that tries to bring something new to the series, but doesn’t quite manage it. Maybe next time…

Rating: 5/10 – lacking the consistency and attention to detail of its predecessor, Cult of Chucky gets by on a handful of bravura moments, but lets itself down by abandoning any attempt at maintaining its own internal logic very early on; the need to set up another sequel means the ending is something of a letdown, but if you’re a fan then this is something you’re probably going to derive a lot of pleasure from.