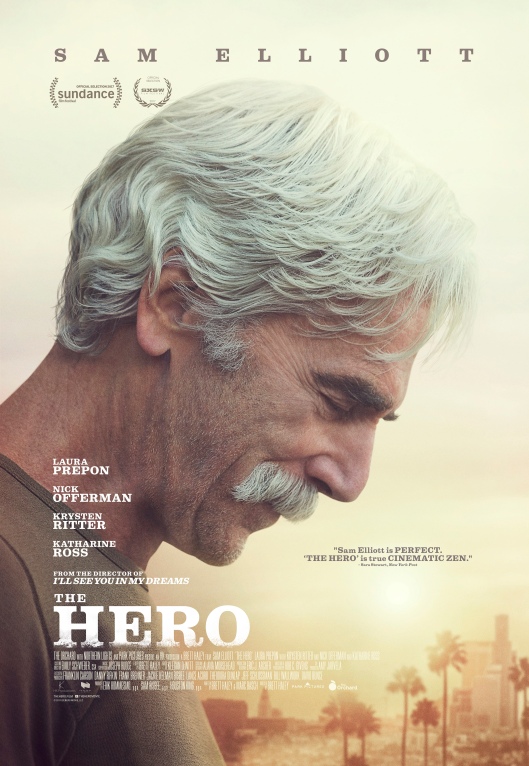 Ah, mortality. It gets us all in the end, sometimes without warning, and sometimes it gives us plenty of time to get used to the idea (or not). For Lee Hayden (Elliott), an aging actor best known for his appearances in Westerns during the Seventies and Eighties, work is a little on the slow side. Movie offers have dried up, and his agent can only get him voice over work on radio ads. Lee spends most of his time mooching around his home in the hills outside Los Angeles, or smoking pot with his friend, Jeremy (Offerman), who co-starred with him in a TV series called Cattle Drive. Lee is divorced, and has a daughter, Lucy (Ritter). He doesn’t see either of them very much as he was a poor husband and father. One day he receives good news and bad news. The good news is that a Western Appreciation Guild want to honour him with a Lifetime Achievement award. The bad news is that he has pancreatic cancer.

The news that he has a terminal condition sends Lee into a bit of a tailspin. He makes an attempt at telling his ex-wife, Valarie (Ross – Elliott’s real life wife), but can’t bring himself to say the words. He makes a further attempt to reconnect with Lucy, and she agrees to have dinner with him the following week. Meanwhile he meets a woman, Charlotte (Prepon), at Jeremy’s house, and later they bump into each other. They begin a relationship, one that’s more tentative on his part than hers, and she agrees to go with him to the guild ceremony. There, his acceptance speech – which isn’t what people were expecting – goes viral, and suddenly, movie offers are coming in, with one in particular looking as if it will thrust him back into the spotlight. However, while his career appears to be getting back on track, his personal life remains a mess. He misses his dinner with Lucy, takes exception to Charlotte using their relationship as part of her stand-up routine, and keeps putting off making a decision about his oncology treatment. 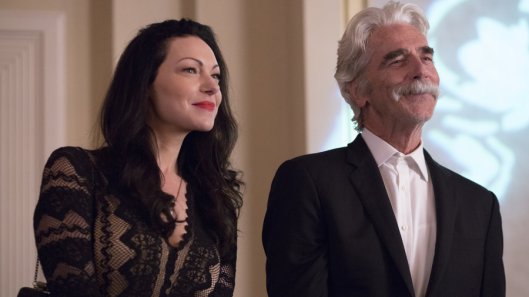 Some roles are written with specific actors or actresses in mind, and Lee Hayden seems like he was written with Sam Elliott at the top of the list of actors to be considered. It’s on these occasions that wondering how the movie would have turned out if someone else had taken the role, proves to be an impossible task, as the actor who is in the role is so good you can’t even begin to replace them with someone else. Such is the case here. While there are a small handful of actors who could have played Lee Hayden, it’s unlikely that any of them could have done as good a job as Sam Elliott. It’s a performance that perfectly gauges the doubts and insecurities and fears of a man in his early seventies who no longer trusts good things will happen to him, and who is hesitant about accepting them when they do. Elliott captures the character’s sense of having been alone for so long that even the idea of engaging emotionally with his family is painful to him, or with someone new like Charlotte. Lee also hopes that if he doesn’t talk about his condition, then he won’t have to deal with it (at one point Lee researches a procedure that could extend his life expectancy by five years, but is put off by pictures of how he would look after the surgery).

Elliott’s laconic, gravel-voiced delivery is also perfect for the role, as is his tall, rangy physique. If you’re going to employ someone to play an aging Western actor, then Elliott has got to be top of the list after Clint Eastwood, but here there’s a level of introspection and vulnerability that Eastwood probably wouldn’t have been able to make convincing. Elliott also embodies the role of Lee in such a way that there’s not one false note to be seen or heard, and if anyone has any doubts as to his ability as an actor, then two scenes should be enough to dissuade them: Lee’s acceptance speech at the guild ceremony, and Lee’s reading of lines from Galactic, the YA sci-fi epic that could be his ticket back to the big time. In both scenes, Elliott wrings out every last drop of nuance and emotion, and his delivery is impeccable. And then there’s Lee’s qualms about his relationship with Charlotte, and why she’s with him. It all adds up to a performance that is completely awards worthy (and yet, it will likely go unrewarded come the awards season in a few months’ time). 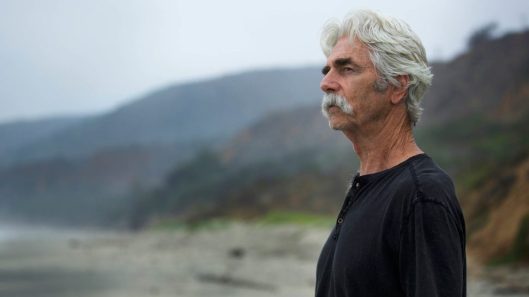 Elliott’s performance aside, there is much else to savour, with the script by director Haley and co-writer Marc Basch, confident in its handling of the other characters, and with a series of dreams Lee has that reflect on his glory days in the only movie he’s ever been proud of (The Hero), and his hope that he’ll be able to make one last movie that’s on a par with it. These dream sequences are vivid and affecting, and speak to Lee’s state of mind throughout, just as a handful of scenes set at the ocean’s edge see him contemplating just walking into the waves and foregoing any further pain. The movie isn’t just a bittersweet drama, however, but also an understated comedy, with moments of inspired humour such as Lee and Charlotte being stoned at the guild ceremony, and Lee being asked to “do one more” line reading for a barbeque sauce ad (when he’s just done “one more”).

Though the movie as a whole is engaging and holds the viewer’s interest and attention with ease, it has to be noted that there’s not a lot that’s new or hasn’t been tried before in The Hero. Fast approaching mortality isn’t exactly an unexplored theme in the movies, and neither is the idea of a relationship with an extended age gap, but Haley and Basch have done more than enough to offset any familiarity by investing heavily in the characters, and by concentrating on providing them with believable dialogue. Ultimately, it’s a movie about legacies and second chances and coming to terms with just how much actual control anyone has over these aspects of our lives, and on that level, it’s very successful indeed.

Rating: 8/10 – Elliott is The Hero‘s MVP, and he dominates the movie in a way that raises the material and makes it more impressive than its basic premise would suggest; backed by good performances from Prepon and Offerman, a very poignant use of the Edna St Vincent Millay poem Dirge Without Music, and vibrant cinematography courtesy of Rob Givens, this is a movie that is quietly potent and well worth finding the time for.