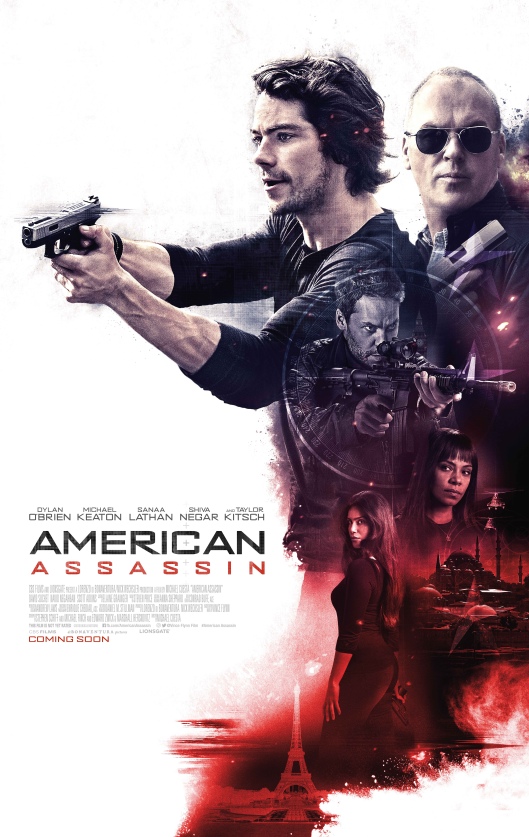 It doesn’t take long – or much – to work out that American Assassin wants to be the first in a new spy/action series. After all, it’s an origin story, and the main character, Mitch Rapp (O’Brien), is in his early twenties at this point, so the potential is there for several more movies to be adapted from the novels by Vince Flynn, and made into the kind of slick, glossily produced, but largely pedestrian movie that’s been put together here. Depending on your patience or your level of appreciation for Rapp and his personal mission to rid the world of terrorists – particuarly Muslim ones – this will either have you urging him on, or wondering what makes him so special. However, what is certain, is that Mitch’s origin story leaves a lot to be desired.

What sets Mitch off on his pesonal mission happens on a beach in Ibiza. Having just proposed to his girlfriend, Katrina (Vega), Mitch is getting them drinks to celebrate when, from out of nowhere and with no warning at all, the beach is overrun by terrorists who start shooting randomly at everyone, including Mitch himself, who gets wounded, and (of course) Katrina, who is killed right in front of him. Fast forward eighteen months, and Mitch is now on the trail of the terrorist responsible for the beach attack. He’s managed to persuade said terrorist that they share the same aims and gotten himself a personal invitation to meet up in person. But just as he’s face to face with his arch-nemesis, a team of US Special Forces ops take out the terrorist and his men, and leave taking Mitch with them. He’s taken to a CIA safe house where he spends thirty days being debriefed, and impressing CIA Deputy Director Irene Kennedy (Lathan). She wants him for a black ops team called Orion, because “he tests off the chart” for what they need. 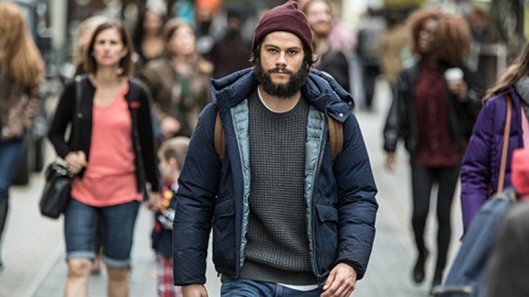 Without wishing to use this site’s favourite I-word, what follows could be predicted by just about anyone, even someone who’s never seen this kind of movie before (or any kind of revenge flick). Mitch is revealed to have authority issues, and he clashes with his trainer/handler Stan Hurley (Keaton), while also getting on the nerves of the rest of his team, and in particular, those of Victor (Adkins), his main rival for the position of Alpha Male. But Irene keeps on vouching for him, even when Mitch makes it clear he’s not a team player, and even when Stan correctly deduces that he’s driven by revenge and not by any patriotic duty (which is apparently preferable, as revenge is regarded as something that gets in the way of being a fully competent operative). Sent on the trail of some missing weapons grade plutonium that may or may not be about to fall into the hands of a trio of Iranian hardliners, Mitch disobeys orders on a mission in Istanbul, but is fortunate enough to retrieve vital information in the process.

This sets the pattern for the rest of the movie, as Stan tries to focus Mitch’s energies in the right direction, while Mitch continues acting impulsively and without the slightest idea of what he’s going to do next until he makes it up on the spot. He’s kind of an anti-hero, using the resources of the CIA to wage his own war on terror, while being told that his approach and attitude isn’t the best. This leads to a fair bit of confusion on the script’s part, as Irene and Stan (mostly Stan) keep telling him that his motives are wrong. But without them, Mitch wouldn’t have the skill set that he has, and he wouldn’t “test off the chart”. Apparently, he’s a natural, the kind of operative that the CIA prays comes along every so often, but at the same time they want to reign him in and make him fit their approach and attitude. And they wonder why it doesn’t work…

In the end, the movie can’t help but try and have its cake and eat it, as Mitch swings into action single-handedly at every turn, ignoring Stan’s orders and advice, and getting by on sheer exuberance and luck. O’Brien gives an intense performance as Mitch, but aside from a growing respect for Stan that fits the standard template for this kind of movie, there’s no character arc as such because he goes from delighted fiancé to revenge-fuelled assassin in the space of those eighteen months we never get to see. What we’re left with is a dour, singularly remote character that the viewer can’t connect with, and whose only emotional trait is anger. Other than that, Mitch is pretty much a stiff with a variety of weapons. As his mentor, Keaton continues a run of performances that prove he’s an actor who can make more out of a character than is on the page, and whose work ethic is almost second to none. Whenever he’s on screen, the movie picks up, and his energy helps carry the movie forward when at times it’s in danger of stalling.

Elsewhere, Lathan’s CIA Deputy Director remains a bland interpretation of an even blander role, while Negar grabs some of the limelight as an Iranian agent who’s part of the team when they get to Rome. The main villain is a renegade Orion operative called Ghost (Kitsch) who has his own revenge issues, but like a lot of self-absorbed bad guys he’s prone to too much monologuing and being lenient when it’s absolutely not in his best interest. The script’s nuclear bomb McGuffin feels old hat, and it all leads to an unfortunate bout of ruinous CGI involving the US Navy’s Sixth Fleet that requires such a major suspension of disbelief that only unintentional laughter can be regarded as the correct response to it. Trying to keep all this feeling fresh and exciting, but being undermined by the tired scenarios on display, Cuesta – whose pedigree includes stints on TV’s Six Feet Under, Dexter and Homeland – does what he can, and there are flashes of what he could have achieved, but they’re not enough to lift the material out of its self-imposed doldrums. By the end of the movie, you’ll either be optimistically looking forward to another outing for Mitch and his authority issues, or you might be agreeing with Tina Turner and saying, “We don’t need another hero”.

Rating: 5/10 – a broad spectrum action thriller that’s at least professionally made, American Assassin is the result of the work of four screenwriters (including Edward Zwick when he was attached to direct as well) who, between them, couldn’t make the material memorable enough; formulaic and predictable at every turn, it’s not a bad movie per se, just one that doesn’t have the necessary impact to help it rise above the bar set by the likes of James Bond or Jason Bourne.