Hampstead is a curious movie, one that’s inspired by a true story, but structured in such a way that it seems to be deliberately insulting the memory of the real-life person that Brendan Gleeson’s character is based on. That man was called Harry Hallowes, an Irishman who was evicted from his flat in Highgate, London in 1987 and who built a makeshift home for himself in a corner of Hampstead Heath. When property developers tried to evict him, the case went to court and he was able to claim squatter’s rights because he had been “resident there” for over twelve years. In 2007 he was awarded the deed to the half-acre of land on which he was living; it was worth over £2 million. Hampstead takes that story and makes it into a lightweight romantic comedy that flits along unobtrusively and in banal fashion while making it more about Diane Keaton’s American widow in London, Emily Walters, than it does the movie’s fictional Harry Hallowes, Donald Horner.

Emily lives in an apartment building overlooking Hampstead Heath. Her husband has died leaving her in financial difficulties that she’s doing her best to ignore. She works part-time in a charity shop, but otherwise is fairly aimless, and spends much of her spare time trying to avoid her friend, Fiona (Manville), who also lives in the building and who is doing her best to set up Emily with a new man. One day, while looking through her husband’s things in the attic room she finds a pair of binoculars and uses them to look out over the heath. She spots Horner’s makeshift home, and becomes intrigued enough to continue spying on it, and eventually him. When she sees him being attacked, she calls the police, but doesn’t come forward until a few days later when she sees him in Highgate Cemetery. They become uneasy friends at first, then a romance develops, but it’s when Emily learns about the efforts to evict Donald that she finds a new purpose in her life and determines to help Donald whether he likes it or not. 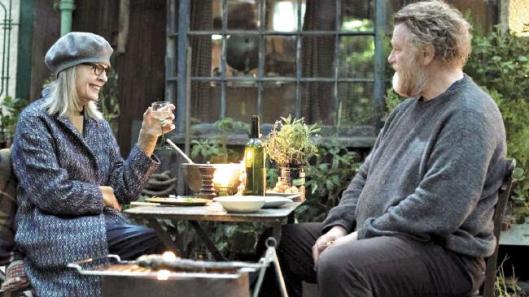 It’s a measure of Robert Festinger’s underwhelming screenplay that Donald’s plight can only be addressed through the intervention of a woman who’s looking for some meaning in her life. That she takes on his cause for herself is both selfish and self-serving, but the script ignores this in its efforts to make Emily appear selfless instead. As a result, she isn’t quite as sympathetic a character as perhaps was intended, and she comes across as a busybody with good intentions rather than the supportive friend (and eventual lover) that she’s meant to be. It makes watching long stretches of the movie difficult as Emily, under the guise of making a difference, does so in order to make herself feel better about her life. In other movies this might be acceptable – it’s a standard character arc, after all – but when this is in service to someone else’s story, someone who actually existed, then it comes across as insensitive and inconsiderate. Was Hallowes’ story so undramatic that it needed a fictional character, and a self-centred character at that, to give it relevance and/or meaning?

The answer is obviously No, but still, it’s the path the movie has chosen to take in its efforts to tell a version of Hallowes’ story. On that basis though, the movie is still unsuccessful in its aims as it tries to create a romance out of convenience, and a drama out of necessity (there’s broad humour in there too but it’s not the movie’s strongest suit). The movie ambles along during its first half, building the relationship between Emily and Donald, and making it all so innocuous and inoffensive that when they eventually sleep together, it’s hard to actually believe that they did anything more than just sleep together. In this particular rendition of “normal life”, sex is something to be referenced but not explored, or regarded as believable. This further undermines the credibility of the relationship between Emily and Donald, and makes it seem even more artificial than Festinger and director Joel Hopkins would like.

With the central relationship so hamstrung by the needs of the script, and with Hopkins unable to make more of it than there is on the page, it’s left to Keaton and Gleeson to do what they can with the material and hopefully flesh it out. But neither of them is able to do much more than provide the odd frisson to their roles, and despite their best efforts, both Emily and Donald remain as insubstantial at the end as they were at the beginning. Character traits are embedded from the word go, and they remain firmly in place throughout. Emily may appear emotionally tougher by the end, but it’s not because of her time with Donald, but because she has no choice in the matter; she either toughens up or goes under, and the script naturally chooses the former for her. Donald though, remains the same throughout, and in a chauvinistic approach that the movies love to continue peddling, gives Emily no choice in how their relationship will continue after the court case (it also makes Emily look as if she hasn’t been paying attention to anything Donald has told her about his lifestyle, and why he lives the way he does).

In the end, Hampstead doesn’t have enough substance and/or depth to make it all work, and the movie ambles along quite predictably and with a soupçon of charm to help guide it over the rough spots. The courtroom scenes are played for humour rather than the drama that’s required, the supporting cast all meld into one with the exception of Manville’s deliberately obtuse friend and Watkins’ would-be Romeo to Emily’s Juliet, and there are too many occasions where the movie is trying way too hard to appear whimsical or poignant. Felix Wiedemann’s cinematography is a welcome bonus, as is Stephen Warbeck’s score, both elements helping to give the movie a boost from the obvious nature of the material, but when all’s said and done, this is a movie that takes a remarkable story and uses it as a backdrop in order to tell an unremarkable story that, sadly, we’ve seen hundreds of times before.

Rating: 4/10 – amiable, and watchable enough if you approach it with few expectations, Hampstead rarely gets out of first gear, and when it does it’s only to slip into neutral, where it stays out of being comfortable; Keaton and Gleeson’s performances are undermined by the paucity of the material (and Hopkins’ static direction), and the extraordinary circumstances surrounding the real-life Harry the Hermit are given less than their due, something that should have been addressed before even the first draft was considered.