A small, intimate dinner party to celebrate becoming the Shadow Minister for Health – what could possibly go wrong? Well, when a movie begins with one of its characters answering the front door and aiming a gun at the new arrival, the answer must be: plenty. But we’re coming in at the end – naturally – and in order to understand just what has brought this threatening moment to pass, we must allow ourselves to be brought back in time, to an hour or so before, and into the company of Bill (Spall), an elderly man sitting in a chair drinking red wine and looking as if he’s only physically present, and not mentally or cognitively. His wife, Janet (Scott Thomas), is in the kitchen preparing food. Her mobile phone keeps ringing; people are calling to congratulate her on her promotion. Soon, Janet and Bill are joined by April (Clarkson), a long-time friend of theirs, and her current boyfriend, Gottfried (Ganz).

It’s not long before further guests arrive. Martha (Jones) has known Bill since their college days; her partner, Jinny (Mortimer), is expecting their first child. Later, Tom (Murphy), a banker, arrives without his wife, Marianne, who works in the same department as Janet and is one of her colleagues. While Martha and Jinny talk in the walled courtyard that passes for a garden, Tom behaves nervously from the moment he arrives. He rushes into the lavatory and snorts a couple of lines of cocaine and reveals he’s carrying a gun. Composing himself as best he can, he joins the others who are busy discussing everything but Janet’s promotion. April seeks to address this by raising a toast to Janet, but her ploy is over-shadowed by Jinny announcing that she is expecting triplets. But even that news is over-shadowed when Bill reveals that he is seriously ill and hasn’t long to live… 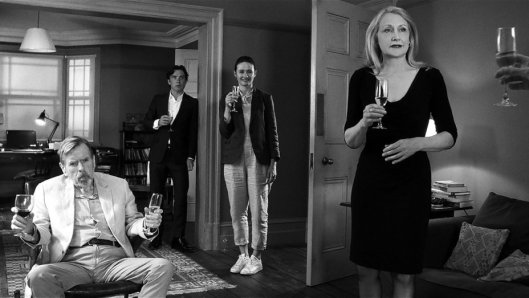 A biting, acerbic comedy of bad manners, the latest from Sally Potter – Orlando (1992), The Man Who Cried (2000) – is a bruising slugfest of a movie, with its characters giving and receiving no quarter in their efforts to maintain (or retain) a sense of their own importance. From the moment April and Gottfried arrive and she mentions that their relationship is over, the mood is gleaned and it’s just a matter of waiting for the inevitable verbal assaults to find their targets (April sets the ball rolling by telling Gottfried to shut up every time he says something). As the movie progresses and we discover the cracks that exist in the relationships of all the couples – even Tom and Marianne – we also see the desperation and the fear that has propelled them into causing these cracks. We learn that Janet is having an affair, and that Bill has no idea about it. But we sense an unhappiness in him that matches hers, what with her continual references to Bill having given up his career to support her own career in politics. The cost to Bill may be more than Janet is aware of: Bill doesn’t just look unwell, he looks positively beaten.

Potter, who wrote the screenplay as well, delves quickly and easily into the lives of everyone, and shows how the dynamics within each relationship shifts and changes with every personal and private confession and revelation that ensues. Janet is devastated by Bill’s news about his health and vows to quit her position within the Shadow Cabinet. Tom is aghast at the sympathy Bill is receiving (for reasons that come to light in time), while Gottfried slips free of April’s yoke and uses his knowledge as a spiritual healer to help Bill come to terms with his impending mortality. April remains stubbornly cynical of everyone else’s motives and opinions, while Martha and Jinny come to a crossroads in their own relationship. Accusations and recriminations fly thick and fast as secrets are revealed and self-preservation becomes the order of the day. By the end, and the opening of that front door, everyone’s lives – with the possible exception of Gottfried – will have been challenged, and changed as a result. 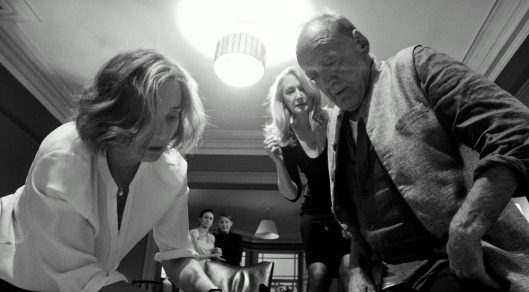 This being a Sally Potter movie, The Party is chock-full of endlessly quotable dialogue, from April’s withering retort, “Please tell me you’re not meditating, Gottfried. Pull yourself together”, to her observation of Martha: “You’re a first class lesbian and a second rate thinker. Must be all those women’s studies.” Clarkson is terrific as a self-confessed realist who can spot a weakness of character from a mile off, and she delivers April’s barbs with an unimpressed, deadpan attitude that is at once fearsome and hilarious. Scott Thomas is also terrific, never quite allowing the viewer to think that Janet’s always behaving like a dyed-in-the-wool politician, while Spall does a mean vacant stare that’s as unnerving as it is impressive (especially later in the movie). Rounding out the cast, Murphy does agitated with aplomb, Ganz is great as someone who thinks Western medicine is “voodoo”, and Jones and Mortimer spar over Martha and Jinny’s commitment issues in ways that add depth to both characters, and overcomes the impression that they have a peripheral involvement with the main storyline.

If all this sounds too heavy, or overly dramatic, rest assured The Party is bitingly funny, and is a black comedy par excellence. Tightly controlled by Potter working at the height of her writing and directing powers, this is short of running time but full of beautifully observed moments that are in service to a fairly straightforward (and predictable, if you look too closely) narrative. The decision to shoot in astonishingly crisp black and white gives the movie a sleek, distinguished feel that works surprisingly well for a movie that could have been adapted from a stage piece (kudos to DoP Aleksei Rodionov), and Potter is helped enormously by some stategic and humorously clever editing choices courtesy of Anders Refn and Emilie Orsini. There’s also a great soundtrack that includes an inspired (if a little predictable) use of Henry Purcell’s When I Am Laid in Earth (Dido’s Lament). All in all, this is a farce wrapped up in a tragedy wrapped up in a cautionary tale, and making the point that you never know what’s waiting for you right around the corner.

Rating: 8/10 – a stellar cast have a great deal of fun with one of Potter’s more approachable screenplays, and the result is a spirited, enjoyable movie that maintains a waspish vibe throughout and piles on the agony for its characters with glee; not to everyone’s tastes though, The Party may seem shallow and derivative at first, but once it gets going it has plenty of trenchant things to say about the nature of trust, and the need to be recognised for who you are in a relationship.

NOTE: The Party is the 15,000th movie that I’ve seen (so far), and it gives me great pleasure to be able to review it here on thedullwoodexperiment. I’ve been doing this for a little over four years now, and to reach such a landmark and to be able to celebrate it here, and with the wider world, is truly incredible. Here’s to reaching 20,000 sometime in 2030!