Tara (Arterton) is a young, stay-at-home wife and mother. Her husband, Mark (Cooper), works long hours, while their two young children, Teddy and Florrie, are of school age but still young enough that they prove a constant source of struggle for Tara as she tries to deal with their beahviours. She is unhappy in the marriage, particularly with Mark’s constant need for sex, which she finds distressing (though he doesn’t know this). When she finally begins to express her unhappiness, Mark is confused, and tries his best to be more supportive, but when Tara puts forward the idea of taking art classes, his support wavers at the first mention. Things come to a head one day when Mark castigates her for being clumsy; Tara packs a bag and leaves right then. She travels to Paris to see a series of tapestries titled The Lady and the Unicorn (the source of her desire to start art classes), and to begin a new life free from the stifling constraints of marriage and motherhood. At the museum she meets a Frenchman, Phillipe (Lespert), and they strike up a friendship, but what seems to be a much needed turning point in Tara’s life, instead brings more problems…

The story of an unhappy woman looking for both meaning and satisfaction in her life, The Escape is a sombre, emotionally redolent drama that isn’t afraid to explore the dark side of being a wife and mother. At one point, Tara confesses that she doesn’t care about her children – at all – and she knows they hate her. It’s a startling admission, relayed in a low-key, subdued manner by Arterton, but exactly the kind of transgressive admission that mothers aren’t supposed to make. This reflection of the depth of Tara’s misery is the movie’s key revelation, the heart of what ails her (if you prefer), and once that particular genie is out of the bottle, it’s obvious that it can’t be put back. Tara will flee the nest she’s built but now detests, and she’ll seek to give her life a renewed purpose. Is she genuinely unhappy with her life? Has she genuinely fallen out of love with Mark? Is she depressed, or suffering from some other form of mental illness? The screenplay (by the director) doesn’t clarify matters – and deliberately so. Tara can’t fully articulate her distress herself, and Savage uses this as a way of holding things back from the viewer. But it’s this that proves the movie’s undoing. 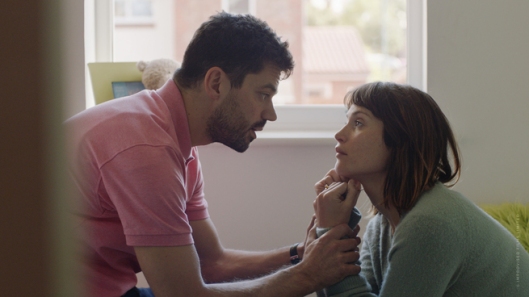 We never get to know what has brought Tara to this point in her life, and why she feels so unhappy. And when she reaches Paris, her initial pleasure at being there soon dissipates once her liaison with Phillipe takes a more serious turn than expected. This section of the movie is the least effective, with Tara’s motivations lacking full credibility, and a brief scene featuring Keller appearing to have been thrown in just to provide a resolution to Tara’s time in Paris. Through it all, Tara remains an emotional enigma, and despite a tremendous performance from Arterton, it’s hard to fathom entirely what’s going on in her head, and why. More successful is Cooper’s distraught husband, unable to fathom why his marriage is falling apart, and without the skills to deal with Tara’s unhappiness. As his efforts to save their relationship fail at every turn, Mark becomes a source of profound pity, and more so than Tara. Cooper and Arterton are great together, and the movie is all the better for the scenes they share, while Lespert’s amiable Frenchman is given short shrift by Savage’s decision to handicap the character in a way that he doesn’t with Tara. The end is deliberately elliptical, and seems to hint at Tara being stuck in the same depressive mind-set as at the beginning – which if true, hints at a broader meaning to events, but one that hasn’t been made clear.

Rating: 6/10 – sterling performances from Arterton and Cooper add lustre to a movie that is much more successful as an exploration of a marriage in freefall, than as an examination of a woman’s need to feel fulfilled; with its writer/director taking a broader approach to the latter theme, The Escape ultimately feels disingenuous once it reaches Paris, and the movie never recovers from its change of scenery and narrative opacity.