In 1964, the writer James Lord (Hammer) is in Paris on a short trip when his friend, the artist Alberto Giacometti (Rush), asks him to sit for a portrait. Giacometti initially says it will take a few hours – one afternoon – but his own eccentricities and his own self-doubts mean that one afternoon becomes several weeks, and Lord is faced with postponing his return to the US until the portrait is finished. Giacometti works in fits and starts, and his personal life often interferes with his progress with the painting. There are long-standing animosities between Giacometti and his wife, Annette (Testud), that are exacerbated by his relationship with Caroline (Poésy), whose portrait he’s also painting. As the time passes, Lord becomes an observer of Giacometti’s life and work, and his insecurities and obsessions. 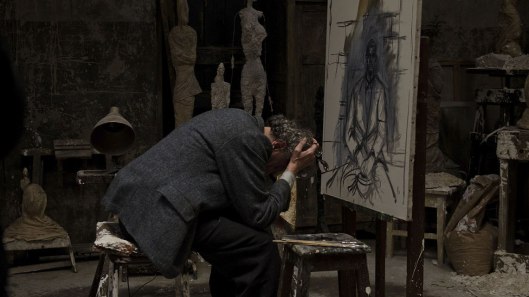 Based on the biography written by Lord a year later, A Giacometti Portrait, Stanley Tucci’s fourth feature as a writer/director is a meditative exploration of the creative process, and the notion that no work of art can ever truly be regarded as finished. It’s an interesting idea for a movie to examine, as by its very nature, Final Portrait is exactly that: a finished product (unless Tucci decides to release revised versions of the movie in future years). But it’s an idea that Giacometti adheres to, and Tucci has him continually looking at the sculptures in his studio, examining them, assessing them, and sometimes changing them slightly, albeit in very minor ways, as if by doing so, he can improve the work in such a way that it becomes more relevant, and worth the effort he’s put into it. The same applies to Lord’s portrait, an endeavour that Giacometti says will never be truly completed, even if Lord were to be available to sit for the rest of his life; even then, more can always be done to improve the work, and then more again.

Tucci isn’t one for histrionics or exaggerated performances, and his cast comply with the needs of a script that requires a delicacy of touch and a sympathetic approach to both Giacometti and his erratic genius. Rush is a terrific choice as the artist who thinks nothing of throwing an envelope with two million francs in it under a bed and forgetting about it. Chain-smoking his way through the movie, Rush portrays Giacometti as a restless man who is always searching for that one moment of clarity in his work but never quite finding it. As the trapped, slightly bewildered, and increasingly frustrated Lord, Hammer is effectively the straight man to Rush’s manic devilry, but he carries the role well, and is a charming foil for Giacometti’s maddening behaviour. In support, Poésy and Testud offer polar opposites as the women in Giacometti’s life (neither of whom are as well treated as they would like), and there’s the quiet, reflective presence of Shalhoub as Giacometti’s brother, Diego. The movie is beautifully constructed, with the artist’s studio a wonderfully designed and assembled cave of wonders courtesy of production designer James Merifield, art director David Hindle, and set decorator Sarah Wan. The camera takes in all the elements that are on display and a wonderfully evocative world is entered into as a result. It’s all overlaid with a tremendous sense of fun, along with a dash of rueful humour here and there, and remains a captivating and entertaining experience throughout.

Rating: 8/10 – an affectionate tribute to the difficulties inherent in the artistic process, Final Portrait is a thoughtful, sincere, modest, and clever movie that offers a beguiling yet intuitive examination of the artist Alberto Giacometti and his work; Rush and Hammer give wonderful performances, Tucci directs with verve and confidence in his own script, and it all proves as invigorating as the pursuit of artistic “truth” should be.