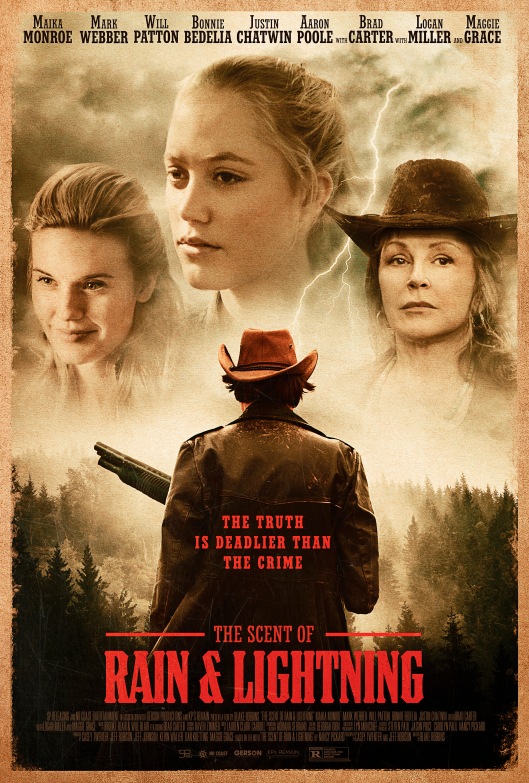 A small town murder mystery with an arthouse feel, The Scent of Rain & Lightning opens with bad news for Jody Linder (Monroe): Billy Croyle (Carter), the man who was jailed for killing her parents, Laurie and Hugh (Grace, Chatwin), twelve years before has had his sentence commuted and is being released from prison. Understandably, Jody and the rest of her family – grandfather ‘Senior’ (Patton), grandmother Annabelle (Bedelia), uncles Chace (Webber) and Meryl (Poole) – aren’t too happy about this, but when Jody confronts Croyle and he accuses ‘Senior’ of getting the verdict he wanted, as well as denying he killed her parents, Jody begins to ask questions around town, questions that make her believe that not everything about her parents’ deaths is as cut and dried as she’s been led to believe. As the town – and her family – start to give up their secrets, Jody is forced to accept that the answers she’s looking for may lie closer to home. But then a senseless act of violence occurs, one that puts Jody in danger, and which threatens her family as well…

A slow burn thriller that looks and feels like an arthouse movie, The Scent of Rain & Lightning (adapted from the novel of the same name by Nancy Pickard) doesn’t offer anything new for viewers with a liking for small town murder mysteries, but it does provide a non-linear narrative that interweaves Jody’s somewhat random approach to investigating her parents’ deaths, with flashbacks to the events that led up to the murders, and finally, what actually happened. These flashbacks are necessary, as Jody proves to be the Rick Deckard of small town murder mysteries, and never learns anything of real value. Thankfully, while she’s looking for answers, the script by Casey Twenter and Jeff Robison (also two of the movie’s producers) keeps the viewer up to speed with what happened, why, how, and who was responsible. It makes for an uneven narrative, with neither strand complementing each other, or finding common moments where they might connect effectively, and as a result, it’s a movie that often feels like it’s been stitched together Frankenstein Monster-style, with no clear idea of which part goes with which. This also leaves some scenes feeling a little lost, or there just to pad out the running time.

Performance-wise, the movie is a bit of a mixed bag also. None of the characters are particularly well developed, and Jody’s expected character arc fizzles out around two thirds in. Monroe, a very talented young actress who’s still looking for that perfect follow up to her breakout role in It Follows (2014), hasn’t much to do beyond ask awkward questions and have those questions go unanswered. As the movie progresses, her role diminishes further and further, and the need to solve the mystery takes precedence. This brings Grace’s character to the fore, but Laurie and her secret prove to be very stereotypical, which leaves any emotional connection the viewer might be looking to make as unlikely as Kevin Spacey winning a Best Supporting Actor award at this year’s Oscars. Elsewhere, the likes of Patton, Bedelia and Poole flit in and out of the narrative, while Webber struggles to make his character ambivalent enough to be considered a viable suspect. Robbins, making his second feature (and appearing as the town sheriff), opts for a muted visual style that is at least atmospheric, but which doesn’t elevate the material, and there are too many occasions where the image is refracted through water as if it has an important psychological resonance.

Rating: 5/10 – with two narrative strands that work independently of each other, and a sense that no amount of screenplay jiggery-pokery could have brought them together, The Scent of Rain & Lightning lacks the impact needed to make its mystery elements work, and its small town milieu appropriately claustrophobic; disappointing then – though not unwatchable – it’s another indie thriller that tries hard to be different while forgetting that it’s using very basic materials to begin with.