Acts of Vengeance (or, the latest episode in the on-going series, Whatever Happened to Antonio Banderas) is, on the face of it, not a great movie. It’s another low-budget action thriller with Bulgaria standing in for America (and poorly at that; you know that a movie’s in trouble when the sign outside a book store says exactly that: Bookstore). It has a trio of internationally known stars who clearly had a fortnight’s break in their schedule, and nothing better to do, plus a cameo (from Forster) that lasts all of two minutes. The movie is a curious mix of the standard and the bizarre – which at least helps it stand out somewhat from the crowd – and it has a clutch of fight scenes that are well choreographed and shot. It keeps Banderas mute for much of the running time, has a plot that’s so worn out it’s practically invisible, telegraphs its villain with all the subtlety of a stampeding rhino, and features one laughably absurd scene after another. In short, it’s two steps away from being a complete disaster. But the movie has an ace up its sleeve, an ace in the form of its director, Isaac Florentine.

If you’re not familiar with Florentine’s career, and if you’re a fan of DTV movies, then where the hell have you been since 1992? Although he’s never made a mainstream movie, Florentine is more than adept at turning some of the least promising material into something that works in ways that it really shouldn’t do. And the man knows how to put together a fight scene. This is just as true here, with Banderas doing the majority of his own stunt work, and Florentine ensuring that Yaron Scharf’s cinematography provides the best coverage possible. So we have Banderas’ avenging lawyer, Frank Valera – he’s looking for the killer or killers of his wife and daughter (Serafini, Blankenship) – learning a range of fighting techniques, and getting into a number of scraps where his newfound skills are shown off to very good effect. These fight scenes, and Banderas’ involvement in them, are what raise the movie out of the various narrative doldrums that leave the story waiting around to be kickstarted again after stalling. These scenes are also the movie’s modus operandi; if they’re not any good, then what’s the point of watching it in the first place? 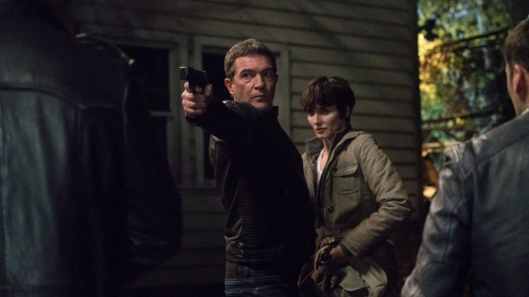 There are the aforementioned bizarre elements to help it along, though, such as the story being structured in such a way that quotes from Marcus Aurelius’ Meditations can be used as chapter headings (“To expect bad men not to do wrong is madness”), and the recurring presence of Russian mobsters for Frank to beat up on – and without any reprisals. Factor in Vega’s handy nurse in a medical crisis, Urban’s illegal cage fighting cop (don’t ask), Frank’s hearing becoming pin sharp within days of his deciding to remain mute until he’s avenged his family (which has him acting like a sighted DareDevil), and the villain conveniently leaving his house key in a planter right outside his front door, and you have a movie that’s only on nodding terms with reality. But even with all that, Florentine has a clean, unfussy visual style that suits the material down to the ground, and he instills the movie with a rhythm that moves things along with a surprising amount of energy. While it’s true that the limitations of Matt Venne’s screenplay are evident in almost every scene, Acts of Vengeance has enough to recommend it as a one-off, just-for-the-fun-of-it viewing.

Rating: 4/10 – yes, it’s bad, and yes, it’s another nail in the career of its star, but thanks to Florentine’s involvement, Acts of Vengeance can be regarded as something of a guilty pleasure; with a handful of well choreographed fight scenes that belie the dire nature of the rest of the material, this is a movie that at least doesn’t outstay its welcome, and wraps things up neatly and concisely.