Ah, the underdog. The plucky, conscientious, yet continually overlooked underdog. One of Life’s also-rans, he or she rarely gets ahead because everyone around them is too busy feathering their own nests to do anything other than take them for granted – except when it comes time to make them the fall guy in some nefarious scheme or other. How many times have we seen this scenario in a movie? (Don’t answer, that’s an entirely rhetorical question.) And how many times have we seen the underdog, after many trials and tribulations, find a way to come out on top? (Again, don’t answer.) But it doesn’t seem to matter how often this kind of scenario plays out in a movie, someone will always come along and attempt to provide another variation on such a time-worn theme. Which leads us to Gringo, the second feature from Nash Edgerton, and another example of the underdog story. Here, the underdog is Harold Soyinka (Oyelowo), a Nigerian-born executive at a US pharmaceutical company, Cannabax Technologies Inc, who finds himself in trouble with a Mexican drugs cartel.

It’s all the fault of his duplicitous bosses, Richard Rusk (Edgerton), and Elaine Markinson (Theron). The marijuana-based drug they’ve been developing for the mass market is ready to go, but in their haste to rake in as much profit as they can, Richard and Elaine have decided to sever ties with the drugs cartel they have been colluding with up until now. Harold doesn’t know any of this at first, but he soon gets wise, and he learns that Richard and Elaine are planning to sell the company, meaning he’ll lose his job. So on a trip to Cannabax’s Mexican factory, Harold decides to fake his own kidnapping. He hopes to force Richard and Elaine into paying the “ransom demand” and pocketing the money for himself. Inevitably, things don’t go the way Harold has planned them, and soon he’s being chased by the cartel, getting involved with the girlfriend (Seyfried) of a drug mule (Treadaway) (they’re all staying in the same hotel where he’s hiding out), and finding an unlikely saviour in an ex-mercenary (Copley) who isn’t all that he seems. 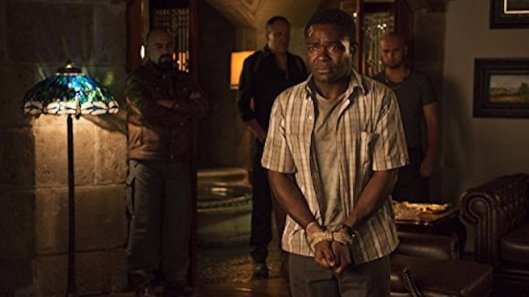 Gringo is the kind of black comedy thriller that always seems to attract a great cast, but which then spends a lot of time and effort in giving them hardly anything to do, or to work with. It’s a busy movie, but messy and dramatically uneven, and unsure of what tone to adopt in any given scene. As it plays out, the movie seems committed to providing as many stock characters in as many stock situations as it can, and to adding a thick layer of humour to proceedings in the hope that if the drama doesn’t work, then the audience will be distracted by the sight of Harold’s high-pitched yelping when given an injection (admittedly funny thanks to Oyelowo), or the cartel boss’s obsession with The Beatles (less so). When things turn violent, the movie becomes another beast altogether, and it tries for tragedy as well, something it can’t pull off because by then it’s way too late. The performances suffer as a result, with Oyelowo and Copley coming off best, but Theron is saddled with a thankless “corporate bitch” role that even she can’t enliven. There’s a half decent movie in there somewhere, but thanks to the vagaries of the script (by Anthony Tambakis and Matthew Stone) and Edgerton’s inability to maintain a consistent tone throughout, it’s never going to see the light of day.

Rating: 5/10 – intermittently funny, but otherwise too predictable and/or derivative of other, similar movies, Gringo wants to be entertaining but lacks the wherewithal to know how; a movie that coasts along at times in its search for the next incident to move it forward, it’s amiable enough, but not very ambitious in its ideas, something that leaves it feeling rough and ready and under-developed.